Note to Journalists: Photos of Mohit Verma and a graduate student working with a cow in Verma’s lab are available on Google Drive. Journalists visiting campus should follow visitor health guidelines. 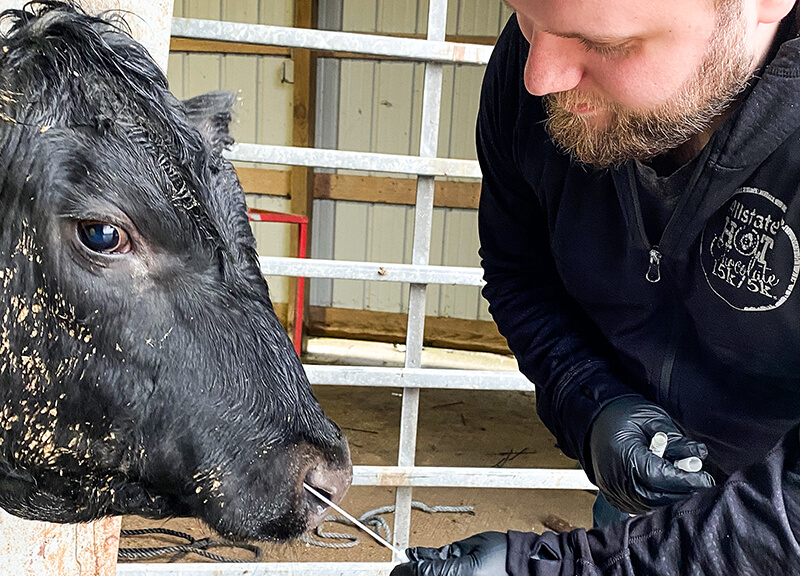 Josiah Davidson, a graduate student in Mohit Verma's Purdue University lab, collects a nasal swab from a calf to test for bovine respiratory disease. Verma received a $1 million U.S. Department of Agriculture grant to develop a biosensor that will rapidly test for the costly cattle disease. (Photo courtesy Suraj Mohan)

WEST LAFAYETTE, Ind. — Bovine respiratory disease (BRD), one of the most prevalent and costly illnesses in the beef and dairy industries, accounts for about half of all feedlot deaths in North America and costs producers as much as $900 million a year. Quickly diagnosing the illness could improve the well-being of animals and save producers significant money. Current tests don’t offer results for four or more days.

Purdue University researchers, led by Mohit Verma, an assistant professor of agricultural and biological engineering, are developing technology to reduce diagnosis time to about 30 minutes. Their work is being funded by a $1 million U.S. Department of Agriculture National Institute of Food and Agriculture Inter-Disciplinary Engagement in Animal Systems (IDEAS) grant.

“Bovine respiratory disease can be triggered by a number of bacteria and viruses, making treatment decisions difficult. By the time a test comes back in four or five days, the disease may have killed the calf or spread to many others in the feedlot,” Verma said. “Over the next three years, we will develop a test that addresses the bacterial side and have a prototype to use in the field.”

Jennifer Koziol, a clinical assistant professor in Purdue’s College of Veterinary Medicine and co-investigator on the project, said veterinarians currently treat BRD with antibiotics that are effective against the most common bacteria that causes the disease. But it’s possible the bacteria is resistant to the chosen antibiotic, making  treatment ineffective. Expediting quick and accurate diagnoses while aiding in choosing the correct antibiotic the first time can save calf lives and reduce unnecessary antibiotic usage.

“When we have BRD going through multiple animals in the herd, we need to know exactly what bacteria we are up against and exactly which antibiotics will be useful quicker than four to five days so we can make good choices about the antibiotics we use the first time,” Koziol said. “Having a rapid test that we can use is good for the animals and good for antibiotic stewardship.”

Verma learned about the need for better BRD testing from Aaron Ault, a senior research engineer in Purdue’s School of Electrical and Computer Engineering, who farms 3,200 acres of corn and soybeans and manages 3,000 head of cattle near Rochester, Indiana. Ault, who will work with the team on engineering components of the technology, said he may spend weeks pulling two or three dozen sick calves per day from his herd for treatment during a bad BRD outbreak.

“The No. 1 struggle I have in farming is BRD. I believe it’s the biggest problem in the beef industry,” Ault said. “This technology can change that. But there’s also an opportunity to collect much better data about the health of our cattle through machine learning, looking at the types and amounts of bacteria normally present in a calf’s respiratory system and using that information to predict potential issues down the road.” 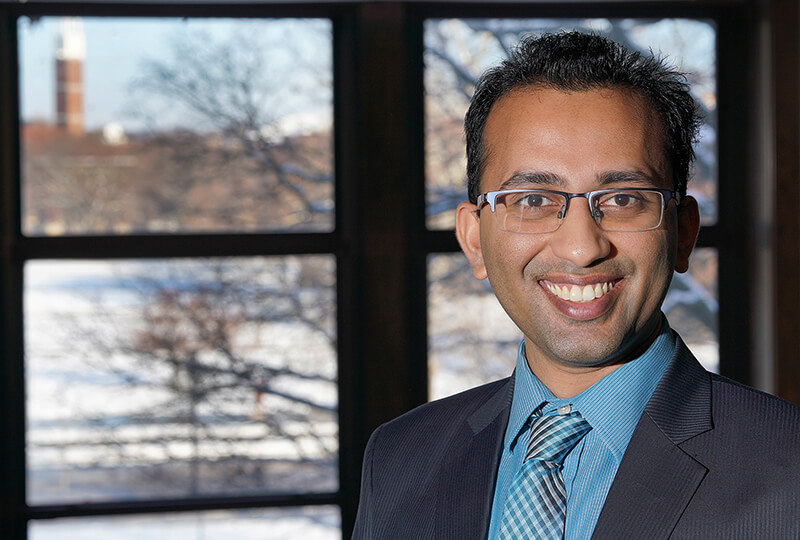 Verma believes the biosensor technology his team is developing for BRD could be the base technology for detecting other animal and human illnesses. Prior to receiving the USDA-NIFA IDEAS grant, Verma had started adapting the platform to identify the presence of SARS-CoV-2, the virus that causes COVID-19.

“To accurately diagnose a BRD infection, our sensors will need to be versatile enough to identify many bacteria and viruses,” Verma said. “It’s entirely possible we’ll be able to adapt these sensors rapidly to address other health issues, potentially even new viruses that require quick detection to prevent global pandemics.”

The preliminary research Verma’s team conducted to obtain the $1 million USDA-NIFA grant was funded by a startup Agricultural Science and Extension for Economic Development (AgSEED) grant. AgSEED was established through Crossroads funding from the Indiana legislature to foster the state’s leadership in plant and animal agriculture and rural growth. Verma also received seed funding from the Disease Diagnostics INventors Challenge, created by the Purdue Institute of Inflammation, Immunology and Infectious Disease in partnership with the Department of Comparative Pathobiology, which contributed the funds to realize the pilot project, the Indiana Clinical and Translational Sciences Institute and the Indiana Consortium for Analytical Science and Engineering.

PHOTO: Josiah Davidson, a graduate student in Mohit Verma's Purdue University lab, collects a nasal swab from a calf to test for bovine respiratory disease. Verma received a $1 million U.S. Department of Agriculture grant to develop a biosensor that will rapidly test for the costly cattle disease. (Photo courtesy Suraj Mohan) A publication-quality photo can be downloaded at: https://www.purdue.edu/uns/images/2020/verma-bovine.jpg

PHOTO: Mohit Verma. A publication-quality photo can be downloaded at: https://www.purdue.edu/uns/images/2020/verma-mohit.jpg