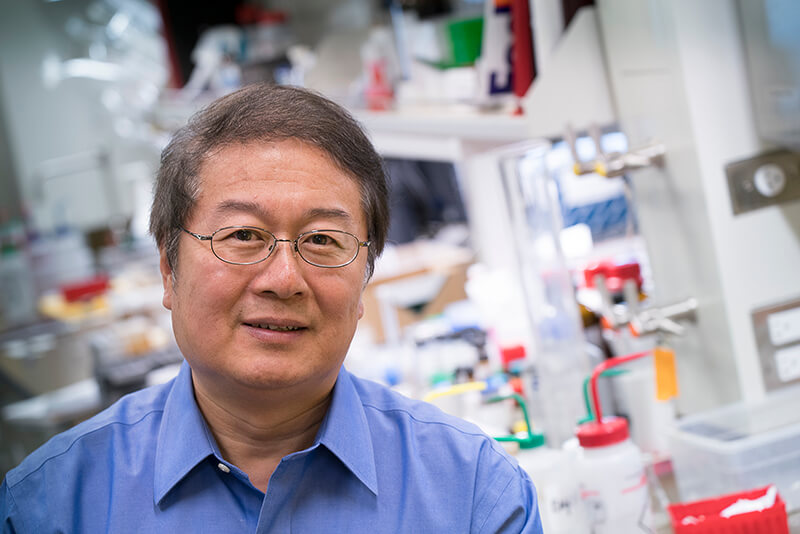 WEST LAFAYETTE, Ind. –  Many types of human cancers exhibit changes in kinase and phosphatase balances. Drugs that inhibit kinase activity have shown success in the clinic as cancer therapeutics, but the phosphatases still remain a largely underexploited target class due primarily to the lack of understanding of how they cause diseases.

Purdue University’s Zhong-Yin Zhang’s team has discovered a novel “phosphatase cascade” that plays a critical role in pancreas, liver, kidney, lung, breast, prostate, brain and other types of cancers. Their findings, published today in the Proceedings of the National Academy of Sciences, show that a “pro-oncogenic” phosphatase PRL2 exerts its effect by down-regulating PTEN, a tumor-suppressive phosphatase frequently lost in human cancers.

“This suggests that PRL2 could be a cancer drug target,” said Zhang, Distinguished Professor of Medicinal Chemistry, the Robert C. and Charlotte P. Anderson Chair in Pharmacology and director of the Purdue Institute for Drug Discovery. “Rather than targeting kinases in the PI3K-AKT pathway, which has seen limited efficacy due to both on- and off-target side effects, we may be able to inhibit the PRL2 phosphatase and restore levels of PTEN to suppress tumor formation. That’s exciting and could impact many forms of cancer.”

Kinases attach phosphate groups to proteins while phosphatases remove them, and both have the potential to change proteins in ways that turn cells cancerous. Zhang’s team showed that PRL2 removes a phosphate from tyrosine 336 in PTEN. When that happens, PTEN is ubiquitinated, or essentially marked for degradation, lowering its levels and ability to fight cancer progression.

“This sheds light on how PRL2 causes cancer and validates it as a target for PTEN-restoration therapy,” said Zhang, who is a member of the Purdue Center for Cancer Research. “It also shows the potential for looking not only to kinases as a way to inhibit tumorigenesis, but also to phosphatases.”

Zhang’s lab earlier identified a promising method for PRL2 inhibition. PRL2 functions as a trimer, and the molecule Cmdp-43 has been shown to disrupt the ability of PRL2 to come together. Zhang is continuing development of the drug.

The National Institutes of Health and the Robert C. and Charlotte Anderson Chair Endowment provided funding for Zhang’s research.

Tumor suppressor PTEN (phosphatase and tensin homologue deleted on chromosome 10) levels are frequently found reduced in human cancers, but how PTEN is down-regulated is not fully understood. In addition, although a compelling connection exists between PRL (phosphatase of regenerating liver) 2 and cancer, how this phosphatase induces oncogenesis has been an enigma. Here, we discovered that PRL2 ablation inhibits PTEN heterozygosity-induced tumorigenesis. PRL2 deficiency elevates PTEN and attenuates AKT signaling, leading to decreased proliferation and increased apoptosis in tumors. We also found that high PRL2 expression is correlated with low PTEN level with reduced overall patient survival. Mechanistically, we identified PTEN as a putative PRL2 substrate and demonstrated that PRL2 downregulates PTEN by dephosphorylating PTEN at Y336, thereby augmenting NEDD4-mediated PTEN ubiquitination and proteasomal degradation. Given the strong cancer susceptibility to subtle reductions in PTEN, the ability of PRL2 to down-regulate PTEN provides a biochemical basis for its oncogenic propensity. The results also suggest that pharmacological targeting of PRL2 could provide a novel therapeutic strategy to restore PTEN, thereby obliterating PTEN deficiency-induced malignancies.