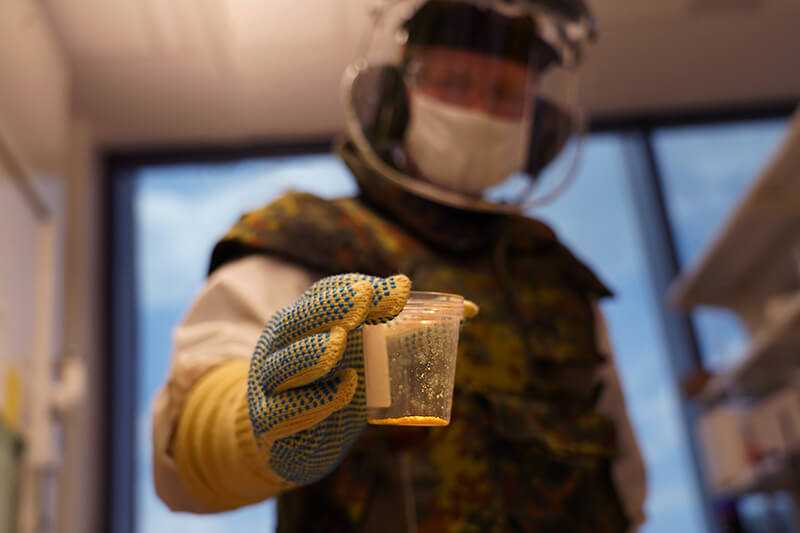 WEST LAFAYETTE, Ind. — Every time a gun fires, lead leaches into the air. A scientific advancement could provide a comparable replacement for lead-based explosive materials found in ammunition, protecting soldiers and the environment from potential toxic effects.

The work, funded by the Army Research Office, appears in a paper published in Chemistry – A European Journal.

“Right now, whenever you are shooting, you’re going to be spreading lead into the air around you,” said Davin Piercey, a Purdue assistant professor of materials engineering and mechanical engineering. “Any use of lead is going to end up polluting the environment in small amounts. The more lead you remove, the better it is for the environment.”

A past study found that people who have been shooting a lot could have elevated lead levels. But so far, the use of lead in explosives has been inevitable.

Because primary explosives are found in the cartridge of just about anything that fires a bullet, the Army has been searching for solutions for many years to develop lead-free versions of these explosives that satisfy environmental regulations associated with lead contamination.

“The development of these materials provides a potential pathway toward lead-free technology,” said Jesse Sabatini, an Army researcher who led the project’s investigation of which molecules to use for these new materials.

What enables the materials to be lead-free is a chemical structure that has not been used in primary explosives before. One material is made of silver salts while the other material contains no metal at all – just the basic ingredients for an explosive. These ingredients include carbon, hydrogen, nitrogen and oxygen.

“Toxicity-wise, silver is an improvement over lead, but it’s still a little toxic. So we also made a nonmetal material that does not have heavy metal toxicity associated with it. Metal is dead weight, energetically speaking, and doesn’t contribute much to an actual explosion,” Piercey said.

The chemical structure used in these materials makes them very dense, meaning that only a small amount of either material would be needed to create an explosion.

Researchers at the Army Research Laboratory modeled these materials to get a sense of how explosive they would be. Piercey’s lab at the Purdue Energetics Research Center (PERC) made the materials and conducted experimental tests demonstrating that they work as primary explosives.

According to the researchers’ calculations, the materials they created have a detonation performance similar to or higher than commonly-used primary explosives.

The CCDC-Armaments Center at Picatinny Arsenal, New Jersey, is interested in exploring these compounds for primary explosive-based applications for bullets and gun propellants. Purdue and Army researchers will continue to gather the data needed for determining which lead-based weapons systems these materials can replace.

“At PERC, our theme is ‘molecules to munitions.’ Our labs can do everything from designing and testing molecules to formulating and manufacturing those molecules into a useful compound,” said Steve Beaudoin, director of PERC and a Purdue professor of chemical engineering.

“Our partners can then take that useful compound and put it into a warhead, missile, rocket or whatever it needs to be.”

A provisional patent has been filed for this technology (track code 2020-PIER-69143) through the Purdue Research Foundation Office of Technology Commercialization.

We report the first compound containing both a tetrazole and an azasydnone ring, a unique energetic material. Several energetic salts of the tetrazole azasydnone were synthesized and characterized, leading to the creation of new secondary and primary explosives. Molecular structures are confirmed by 1 H and 13 C NMR, IR spectroscopy, and X‐ray crystallographic analysis. The high heats of formation, fast detonation velocities, and straight‐forward synthesis of energetic azasydnones should capture the attention of future energetics research.


Note to Journalists: For a copy of the paper, please contact Kayla Wiles, Purdue News Service, at wiles5@purdue.edu. Photos and video of the new explosive materials are available in a Google Drive folder. Journalists visiting campus should follow visitor health guidelines