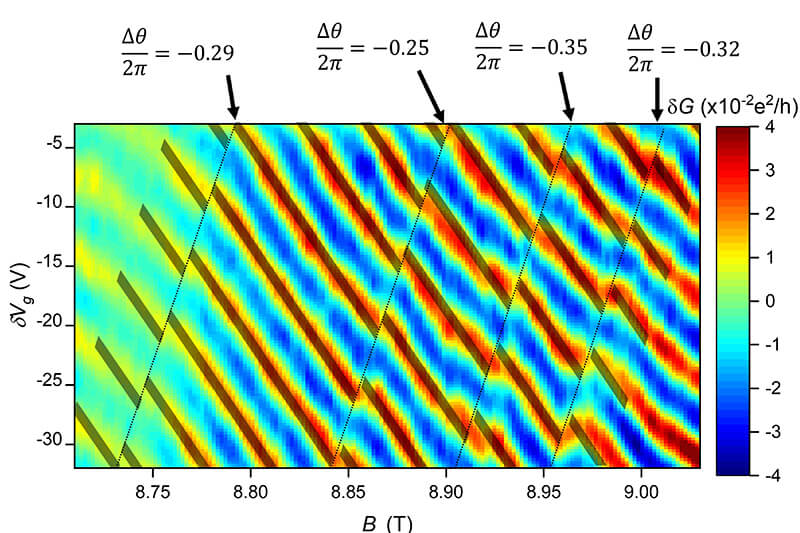 Experimental evidence of quasiparticles called anyons has been found by a team of scientists at Purdue University. Electrical interference in the experiment created a pattern which the researchers called a “pyjama plot”; jumps in the interference pattern were the signature of the presence of anyons. (Purdue University image/James Nakamura)

WEST LAFAYETTE, Ind. — New experimental evidence of a collective behavior of electrons to form "quasiparticles" called "anyons" has been reported by a team of scientists at Purdue University.

Anyons have characteristics not seen in other subatomic particles, including exhibiting fractional charge and fractional statistics that maintain a "memory" of their interactions with other quasiparticles by inducing quantum mechanical phase changes.

Postdoctoral research associate James Nakamura, with assistance from research group members Shuang Liang and Geoffrey Gardner, made the discovery while working in the laboratory of professor Michael Manfra. Manfra is a Distinguished Professor of Physics and Astronomy, Purdue's Bill and Dee O'Brien Chair Professor of Physics and Astronomy, professor of electrical and computer engineering, and professor of materials engineering. Although this work might eventually turn out to be relevant to the development of a quantum computer, for now, Manfra said, it is to be considered an important step in understanding the physics of quasiparticles.

A research paper on the discovery was published in this week's Nature Physics. 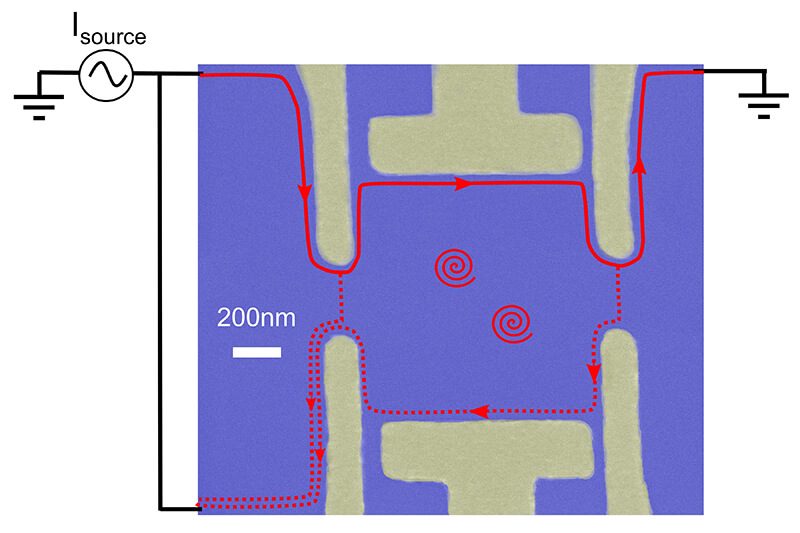 Scientists at Purdue have announced new experimental evidence of a collective behavior of electrons to form "quasiparticles" called "anyons." The team was able to demonstrate this behavior by routing the electrons through a specific maze-like etched nanostructure in a nanoscale device called an interferometer. (Purdue University image/James Nakamura)

Nobel Prize-winning theoretical physicist Frank Wilczek, professor of physics at MIT, gave these quasiparticles the tongue-in-cheek name "anyon" due to their strange behavior because unlike other types of particles, they can adopt “any” quantum phase when their positions are exchanged.

Before the growing evidence of anyons in 2020, physicists had categorized particles in the known world into two groups: fermions and bosons. Electrons are an example of fermions, and photons, which make up light and radio waves, are bosons. One characteristic difference between fermions and bosons is how the particles act when they are looped, or braided, around each other. Fermions respond in one straightforward way, and bosons in another expected and straightforward way.

Anyons respond as if they have a fractional charge, and even more interestingly, create a nontrivial phase change as they braid around one another. This can give the anyons a type of "memory" of their interaction.

"Anyons only exist as collective excitations of electrons under special circumstances," Manfra said. “But they do have these demonstrably cool properties including fractional charge and fractional statistics. It is funny, because you think, 'How can they have less charge than the elementary charge of an electron?' But they do."

Manfra said that when bosons or fermions are exchanged, they generate a phase factor of either plus one or minus one, respectively.

"In the case of our anyons the phase generated by braiding was 2π/3," he said. “That's different than what's been seen in nature before."

Anyons display this behavior only as collective crowds of electrons, where many electrons behave as one under very extreme and specific conditions, so they are not thought to be found isolated in nature, Nakamura said.

"Normally in the world of physics, we think about fundamental particles, such as protons and electrons, and all of the things that make up the periodic table," he said. "But we study the existence of quasiparticles, which emerge from a sea of electrons that are placed in certain extreme conditions."

Because this behavior depends on the number of times the particles are braided, or looped, around each other, they are more robust in their properties than other quantum particles. This characteristic is said to be topological because it depends on the geometry of the system and may eventually lead to much more sophisticated anyon structures that could be used to build stable, topological quantum computers.

The team was able to demonstrate this behavior by routing the electrons through a specific maze-like etched nanostructure made of gallium arsenide and aluminum gallium arsenide. This device, called an interferometer, confined the electrons to move in a two-dimensional path. The device was cooled to within one-hundredth of a degree from absolute zero (10 millikelvin), and subjected to a powerful 9-Tesla magnetic field. The electrical resistance of the interferometer generated an interference pattern which the researchers called a “pyjama plot.” Jumps in the interference pattern were the signature of the presence of anyons.

"It is definitely one of the more complex and complicated things to be done in experimental physics," Chetan Nayak, theoretical physicist at the University of California, Santa Barbara told Science News.

Nakamura said the facilities at Purdue created the environment for this discovery to happen.

"We have the technology to grow the gallium arsenide semiconductor that's needed to realize our electron system. We have the nanofabrication facilities in the Birck Nanotechnology Center to make the interferometer, the device we used in our experiments. In the physics department, we have the ability to measure ultra-low temperatures and to create strong magnetic fields." he said. "So, we have all of the necessary components that allowed us to make this discovery all here at Purdue. That's a great thing about doing research here and why we've been able to make this progress."

Manfra said the next step in the quasiparticle frontier will involve building more complicated interferometers.

This research was supported by the U.S. Department of Energy, Office of Science, Office of Basic Energy Sciences, under award number DE-SC0020138.

Anyons are quasiparticles that, unlike fermions and bosons, show fractional statistics when two of them are exchanged. Here, we report experimental observation of anyonic braiding statistics for the ν = 1/3 fractional quantum Hall state using a device that is equivalent to a Fabry-Perot interferometer. Strong Aharonov-Bohm interference of the edge mode is punctuated by discrete phase slips that indicate an anyonic phase of θanyon = 2π/3. Our results are consistent with a recent theory for an interferometer operated in a regime in which device charging energy is small compared to the energy of formation of charged quasiparticles, indicating that we have observed anyonic braiding.