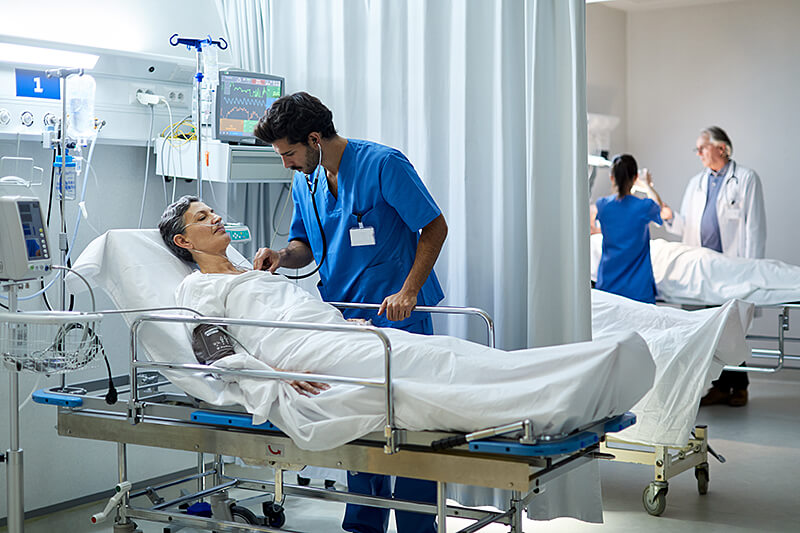 WEST LAFAYETTE, Ind. – Vancomycin-resistant enterococcus (VRE) is among the leading causes of hospital-acquired infections in the United States. An estimated 20,000 people in the U.S. become infected with it each year, and nearly 10% of people who get it die from it.

These superbugs typically develop from infections in the intestinal tract, where the bacteria become resistant to the antibiotic vancomycin. People who stay in a hospital have the highest odds of getting VRE.

A pair of Purdue University researchers from the College of Pharmacy and the College of Veterinary Medicine developed small molecules to combat deadly, drug-resistant enterococcus.

They created their molecules by repurposing a drug that has been used for more than 80 years to treat glaucoma, congestive heart failure and some other health issues. Their work is published in the Journal of Medicinal Chemistry.

“The potency of these molecules and the ability to tune the molecules’ properties to target VRE in different compartments of the body make this an exciting project,” said Daniel Flaherty, an assistant professor of medicinal chemistry and molecular pharmacology. “I believe our discovery may help to change the way people treat VRE in the future.

“We can have molecules that can be used to treat deadly systemic VRE infections, or through manipulation of the properties of the molecule, design a compound that will reside solely in the gastrointestinal tract to reduce VRE colonization. By working across disciplines at Purdue, we have been able to improve the effectiveness of this drug 600 times better than where we started in treating VRE.”

Mohamed Seleem, a professor of microbiology, who co-created the molecules with Flaherty, said the problem with antibiotics on the market is that they are used for a wide variety of illnesses.

“These antibiotics can really rip apart the guts and destroy good bacteria,” Seleem said. “Then someone can develop Clostridium difficile, also known as C. diff, which kills about 30,000 people each year in the United States. Scientists across the globe are working on better solutions, but I think we are far away from seeing narrow-spectrum antibiotics proliferate the market.”

The Purdue team’s small molecules have been shown to target VRE and have the properties necessary to treat VRE in both systemic circulation or in the GI tract, where all VRE infections originate.

The scientists have worked with the Purdue Research Foundation Office of Technology Commercialization on patenting the technology.

The innovators and OTC are looking for partners to continue developing their technology. For more information on licensing and other opportunities, contact Abhijit Karve of OTC at aakarve@prf.org.

Vancomycin-resistant enterococci (VRE) are the second leading cause of hospital-acquired infections (HAIs) attributed to a drug-resistant bacterium in the United States, and resistance to the frontline treatments is well documented. To combat VRE, we have repurposed the FDA-approved carbonic anhydrase drug acetazolamide to design potent antienterococcal agents. Through structure–activity relationship optimization we have arrived at two leads possessing improved potency against clinical VRE strains from MIC = 2 μg/mL (acetazolamide) to MIC = 0.007 μg/mL (22) and 1 μg/mL (26). Physicochemical properties were modified to design leads that have either high oral bioavailability to treat systemic infections or low intestinal permeability to treat VRE infections in the gastrointestinal tract. Our data suggest the intracellular targets for the molecules are putative α-carbonic and γ-carbonic anhydrases, and homology modeling and molecular dynamics simulations were performed. Together, this study presents potential anti-VRE therapeutic options to provide alternatives for problematic VRE infections.