Is your pet's food making you sick? Study finds many don't know the risk. 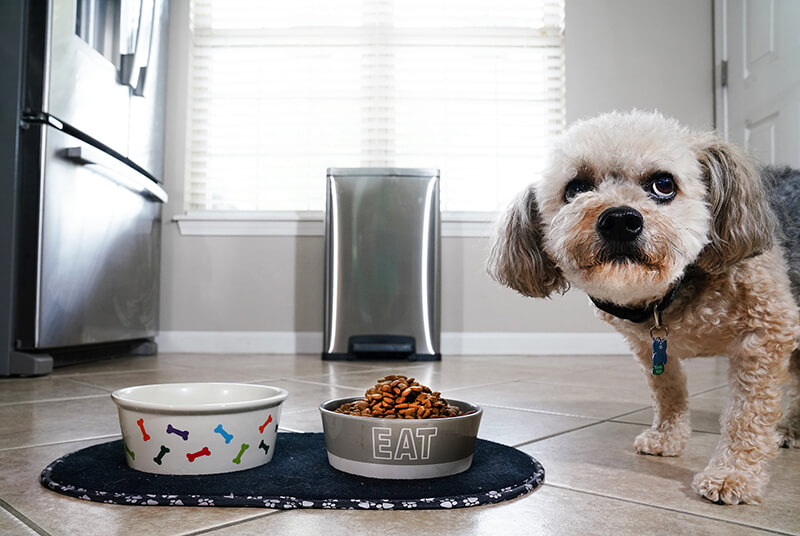 Many Americans are unaware of the potential risk of contracting a foodborne illness from pet food, a Purdue University study shows. Purdue University professor Yaohua “Betty” Feng said that washing hands after playing with and feeding pets would significantly reduce the chances of pet owners getting sick. (Purdue Agricultural Communication photo/Tom Campbell)

WEST LAFAYETTE, Ind. — Each year, more than 50 million Americans develop gastrointestinal issues that lead them to question the safety of their most recent meals. It’s entirely possible that their distress could be caused not by the food they have eaten, but the meals served to their furry friends.

A study led by Purdue University’s Yaohua “Betty” Feng, an assistant professor of food science, showed that many Americans don’t wash their hands after feeding or playing with their cats and dogs and aren’t aware of the risk of contracting a foodborne illness from those activities.

“Almost all dog and cat owners interact with their pets closely like cuddling, sleeping with them, kissing them, but after those interactions fewer than one-third of them wash their hands with soap,” said Feng, whose findings were published in the Journal of Food Protection. “They don’t really consider that they could get sick or that a foodborne pathogen could be transferred from their pet to themselves.”

The U.S. Centers for Disease Control and Prevention estimates that pathogens such as E. coli and salmonella sicken nearly 48 million people, hospitalize 128,000 and kill around 3,000 annually. There is no data on how many of those come from pet foods, but there have been more than a dozen pet food recalls in 2020 due to the presence of a foodborne pathogen. Last year more than 150 people were sickened by salmonella in pig ear dog treats.

“Some dogs and cats do not have symptoms, even if they were contaminated with foodborne pathogens like salmonella. There’s potential for them to share those pathogens with their owners when interacting with them,” Feng said.

According to the survey of more than 1,000 cat and dog owners in the United States:

The study showed that 78 percent of people were not aware of recent pet food recalls or outbreaks associated with foodborne pathogens in those foods. One-quarter of people do not consider dry pet foods and treats as potential sources of these pathogens.

Raw meat or raw animal product diets are growing in prevalence for supposed health benefits. The study showed that about 25% of respondents feed their pets raw foods, but about half of those people did not report washing their hands after those feedings and allowed their pets to lick them.

Feng said the results suggest that pet owners need more education about the safety of pet foods and proper handling of food and pets to prevent contracting an illness. She plans to develop materials that will address those issues.

Some tips to keep pet owners from getting foodborne illness include:

“We’re not saying you shouldn’t hug your dog, but you should know the risks and how to protect yourself against the possibility of contracting an illness,” Feng said. “Learning the risk to your pet will make you an informed pet owner and avoid some of the pitfalls that could make you or your pet ill.”

Pet food has been identified as a source of pathogenic bacteria, including Salmonella and Escherichia coli. A recent outbreak linked to Salmonella -contaminated pet treats infected over 150 people in the United States. The mechanism by which contaminated pet food leads to human illness has not been explicated. Pet owners’ food safety knowledge and their pet food handling practices have not been reported. This study evaluated pet owners’ food safety knowledge and pet-food handling practices through an online consumer survey. The survey consists of 62 questions and assesses (1) owners’ food safety knowledge and pet-food handling practices; (2) owners’ interaction with pets; (3) owners’ risk perception related to their own health, their children’s health, and their pets’ health. The survey was pilot-tested among 59 pet owners before distribution to a national consumer panel, managed by Qualtrics XM. All participants (n=1,040) were dog and/or cat owners in the United States. Almost all pet owners interacted with their pets (93%) and most cuddled, allowed their pets to lick them, and slept with their pets. Less than one-third of pet owners washed their hands with soap after interacting with their pets. Over half (58%) the owners reported washing their hands after feeding their pets. Most pet owners fed their pets dry pet food and dry pet treats. Some fed their pets raw meat or raw animal product (RAP) diets because they believed these diets to be beneficial to their pet’s overall health. Many owners (78%) were unaware of pet food recalls or outbreaks associated with foodborne pathogens. Less than 25% considered dry pet foods and treats as a potential source of foodborne pathogens. The findings of this study indicated the need for consumer education about pet food handling. The data collected can assist in developing more accurate risk assessment models and consumer education related to pet food handling.