Is there other life in the universe? Purdue scientist is ready to search for the answers

WEST LAFAYETTE, Ind. — Every rock on Mars is a time capsule for Briony Horgan, potentially holding information from billions of years ago that could help answer the questions about life in the universe today.

Horgan, an associate professor of planetary science at Purdue, soon will have an opportunity to delve into those questions by searching for evidence of past microbial life as part of the NASA Mars rover Perseverance mission. Horgan’s research and a presentation led NASA to select the rover landing site.

One of science’s missing pieces of the puzzle is understanding how common simple life forms such as microbes are in the universe. Finding evidence of microbial life, even from billions of years ago, opens the door to new research (Horgan speaks about the mission in Youtube video).

“This is exciting because it is the first time we are really searing for ancient life in our solar system or beyond,” Horgan said. “This is a chance to understand how rare or how common life like us is in the universe.” 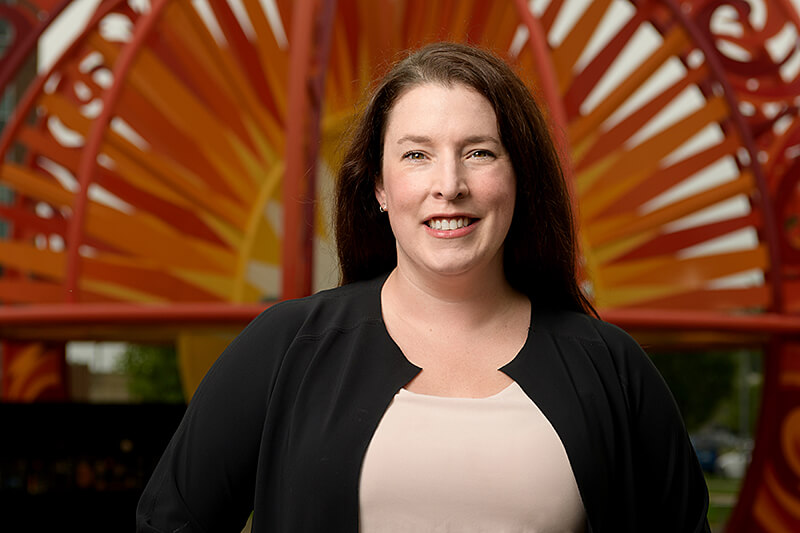 Briony Horgan, associate professor of planetary science, stands in front of the VOSS Model on Purdue’s campus. Horgan is working to determine whether we are alone in the universe or if life once existed on other planets such as Mars. (Purdue University/John Underwood)

The NASA rover Perseverance is expected to touch down on Mars in February. It is about a quarter of the way through its flight after launching on July 31.

To help the mission’s odds of finding evidence of life, the Mars rover will land in Jezero Crater, just north of the planet’s equator. Horgan was part of the science team that studied whether the site, which used to be a lake and large river delta, would be a good target for Perseverance.

“It has everything we want in a landing site, not just ancient lake and mineral deposits, but it allows us also to get out of the crater and get out on the surrounding terrain to get at even older rocks that could tell us about the earliest parts of Mars history,” Horgan said. “We’re excited to see everything in and around the crater.”

Almost 30 years of Mars research has led to this mission, and Horgan is excited about the location’s possibilities. She has played a key role in the mission, including an important finding from mineralogy research she led on the location that contributed to Jezero Crater’s selection and helping design the camera that will be the scientific eyes for Perseverance.

At this point, Earth is the only data source to help determine how and where life forms and evolves. But Horgan said erosion and plate tectonics have destroyed much of the evidence.

“But on Mars those rocks are just sitting on the surface waiting for us,” she said. “If we show signs of ancient life on Mars, that is going to open up a whole new field of science trying to understand the origins of not just life on Mars but also on our own planet.”