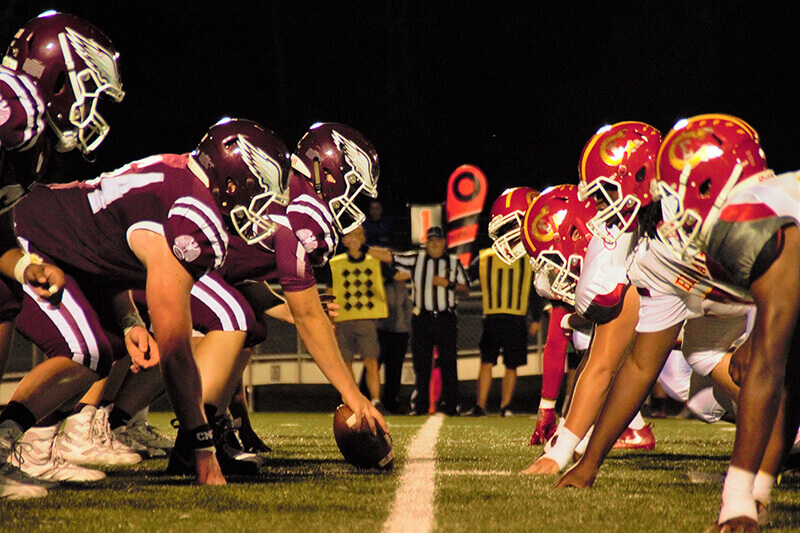 Offensive linemen could experience 40% fewer hits to the head in a game if they start off a play standing up rather than with fingers to the ground. (Credit: Unsplash)

WEST LAFAYETTE, Ind. — Repetitive hits to the head can cause brain damage without actually leading to a concussion, past studies have suggested.

Just a simple change to the starting stance of players on the offensive line in American football might reduce this burden, a study conducted by Purdue University and Stanford University researchers now shows.

The study found that offensive linemen experienced at least 40% fewer hits to the head if they started a play standing up, rather than with their fingers touching the ground. The slight positional change could eliminate a significant number of hits without affecting the game, the researchers say.

Offensive linemen are known to take on more head impacts than any other player in the game.

“An offensive lineman tends to start off in a three-point stance, which means that one hand remains in contact with the ground until the start of the play, similar to sprinter fashion. The first move is always to come up, and most players tend to lead with their head,” said Eric Nauman, a Purdue professor of mechanical engineering and basic medical sciences.

“If you’re required to be in a two-point stance, meaning standing up with no hands on the ground, then you’re already up a little bit. You’ve already got your hands in a good position and it’s harder, actually, to lead with your head.”

The study, published in the Clinical Journal of Sport Medicine, observed players participating in The Spring League, a professional football developmental league.

The findings back a rule change suggested by Paul Auerbach, the Redlich Family Professor Emeritus in the Department of Emergency Medicine at the Stanford University School of Medicine. He is an adjunct professor of military and emergency medicine at the F. Edward Hébert School of Medicine of the Uniformed Services University of the Health Sciences.

Based on his experience as a physician for football teams at the high-school, collegiate and professional levels, Auerbach had a hunch that eliminating the “down lineman” would reduce hits to the head. He wrote a letter suggesting this rule change in 2016, which is published in the Journal of the American Medical Association (JAMA). He repeated his suggestion in a 2018 opinion editorial that appeared in the Wall Street Journal.

“It seemed logical that if something could be done to lessen the number of potentially injurious blows to the heads of linemen, that this would be desired by people who care about making the game safer. So, I was delighted when I was contacted by Brian Woods, CEO of The Spring League, who inquired what he might do to help figure this out,” Auerbach said.

Auerbach and a team led by Nauman and Thomas Talavage, a professor of electrical and computer engineering and biomedical engineering at Purdue, set out to investigate this suggested rule change in an observational pilot study of three Spring League practice sessions and one exhibition game in July 2018 in San Diego.

Video footage indicated which players were on the field for each play and whether players positioned on the offensive line were in a two-point stance or a three- or four-point stance.

Offensive linemen in a two-point stance sustained fewer hits than those in a three- or four-point stance, which led to at least a 40% reduction in hits.

“If nothing else, this study suggests that you can actually make a big difference with rule changes that quite honestly, at least from our perspective, didn’t affect the game play in any meaningful way. In fact, if you make everybody start in a two-point stance, it’s harder to tell if it’s a run or pass play,” Nauman said.

According to the researchers, this study is the first to look at a specific intervention for American football and see an effect on real plays.

While the study was small, the researchers believe that there are enough data to advocate for a rule change.

“Forty percent fewer hits would translate to both games and practices. The next step is to improve coaching and blocking and tackling techniques, which could lead to reducing even more hits to the head,” Talavage said.

Purdue researchers are currently developing helmet sensors that would help referees to better call when players try to “spear,” or use their heads as weapons.

This study received no external funding.

About The Spring League

The Spring League (“TSL”) is a professional sports property, which was created to serve as a developmental league and showcase for professional football talent. Currently, TSL is the only true professional football developmental league, operating in the United States. Since its inception in 2017, TSL has morphed into a highly scouted event that lures representatives from the NFL and CFL. To date, over 145 players have been signed out of The Spring League to NFL (90) and CFL (55) contracts.

Note to Journalists: For a copy of the paper, please contact Kayla Wiles, Purdue News Service, at wiles5@purdue.edu. A stock photo of football players at the line of scrimmage is available at https://purdue.university/2XPNyIJ.

The goal of this pilot study was to evaluate the number of head acceleration events (HAEs) based on position, play type, and starting stance.

Four hundred thirty-seven HAEs were recorded during practices and 272 recorded during the exhibition game; 98 and 52 HAEs, the greatest number of HAEs by position in the game, were experienced by the offensive and defensive linemen, respectively. Linebackers and tight ends experienced high percentages of HAEs above 60 g. Offensive line players in a down stance had a higher likelihood of sustaining a HAE than players in an up stance regardless of the type of play (run vs pass).

Changing the stance of players on the offensive line and reducing the number of full-contact practices will lower HAEs.