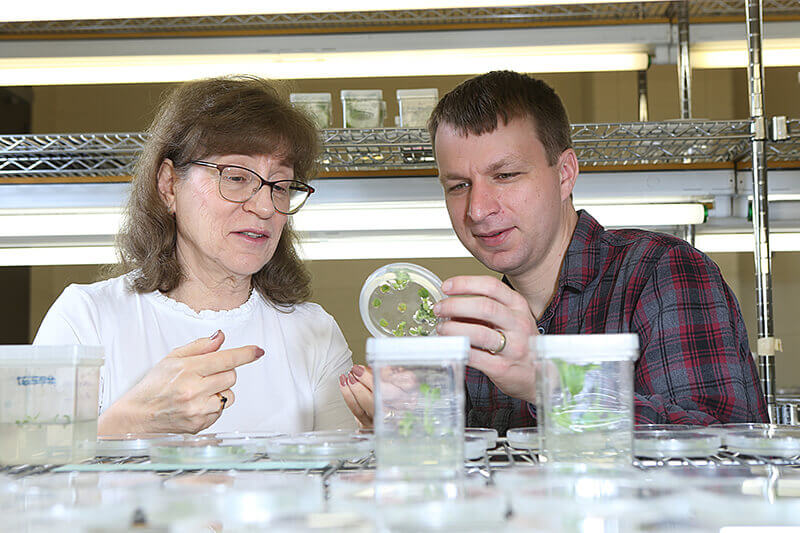 While searching for a method to increase phenylalanine production in plants, Natalia Dudareva and Joseph Lynch discovered a link between the compound and the plant hormone auxin. (Purdue Agricultural Communication photo/Tom Campbell) Download image

WEST LAFAYETTE, Ind. — Purdue University scientists Natalia Dudareva and Joseph Lynch have been searching for a way to increase a plant’s production of phenylalanine, a compound important for plant survival and used by humans in flavors, fragrances, biofuels, insecticides and pharmaceuticals. Their work led to discovery last year of a previously unknown metabolic pathway that they thought could be engineered to allow plants to produce more phenylalanine than they do on their own.

A genetic modification that should have ramped up phenylalanine production led to an unexpected reduction of the compound. This setback, however, illuminated a hidden connection between phenylalanine biosynthesis and the plant hormone auxin, which has implications for not just amino acid metabolism, but also our understanding of growth and development.

“For many years, we didn’t know how fluctuations through these pathways were regulated and interconnected with plant hormones and other compounds,” said Dudareva, a distinguished professor of biochemistry and member of Purdue’s Center for Plant Biology, whose findings were published in Nature Chemical Biology. “We found a cross-talk with auxin, which may explain why plants don’t use this second pathway and create larger amounts of phenylalanine.”

Plants use phenylalanine as building blocks for compounds to attract pollinators, for defense, reproduction, growth and development. While sufficient for those purposes, the amounts are small for human uses.

Phenylalanine production happens mainly in plastids, the small organelles such as chloroplasts. But Dudareva, Lynch, who is a Purdue research scientist, and graduate student Yichun Qian discovered that plants also can produce phenylalanine in cytoplasm and may be able to make larger quantities there.

The scientists grew petunias to maturity, and then induced production of an enzyme that would increase phenylalanine production in the cytosol.

“It worked beautifully. We got a threefold increase in phenylalanine synthesis,” Lynch said.

That’s because both phenylalanine and auxin, a plant hormone necessary for plant growth, can use a compound called phenylpyruvate as a substrate for biosynthesis. By producing more phenylalanine in the cytosol, phenylpyruvate increased in that compartment and created more auxin.

Slight variations in plant hormones can cause significant developmental problems. In this case, the increase in auxin led to the production of fewer plastids and a drop in phenylalanine output.

“Our strategy for creating more phenylalanine won’t work. We kind of hit a dead end because of the unexpected cross-talk with auxin,” Lynch said. “We will continue to try to increase phenylalanine, but we’ll work through the plastid pathway and try to overcome the bottlenecks that limit production there.”

Dudareva said the findings not only show how phenylalanine and auxin are linked, but offer a suggestion about why plants have the less-often-used cytosolic pathway at all.

Plants likely produce enough phenylalanine through the tightly regulated plastid pathway and don’t produce more so as not to throw off the auxin balance. But when a plant is injured and needs more phenylalanine for defense or to heal, the cytosolic pathway can kick into gear to provide what’s needed.

“It looks like the pathway is used by plants as a first response to stress or damage,” Dudareva said. “This is important to know because initially it wasn’t clear if plants used this pathway at all for phenylalanine biosynthesis.”

The National Science Foundation and the U.S. Department of Agriculture National Institute for Food and Agriculture supported this research.

Note to Journalists: A photo of the researchers looking over samples is available for use on Google Drive.

Modulation of auxin formation by the cytosolic phenylalanine 2 biosynthetic pathway