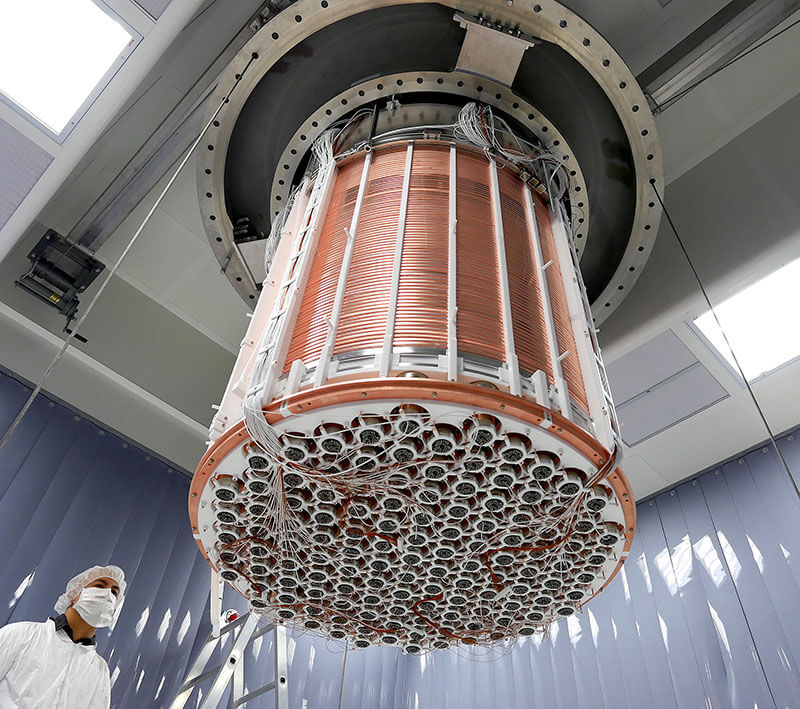 An international team of scientists studying sub-atomic particles have reported what they are calling "excess events." Rafael Lang, associate professor of physics at Purdue University and a member of the research team, says what was detected could be a background hydrogen isotope, or, "much more excitingly" a sign for yet-to-be-discovered new physics. (Photo courtesy of the XENON Collaboration.) Download image

WEST LAFAYETTE, Ind. — Most of the universe is thought to be made up of dark matter, a mysterious material whose existence has been only implied and never actually detected.

This week, however, in a paper co-authored by 163 scientists from 11 countries, researchers describe what for now they are calling "excess events," which occurred in the background of the experiment.

"This is really a rather surprising result," said Rafael Lang, Purdue University associate professor of physics and astronomy. "The excess measurements do not show up in our main analysis, but rather in our background events. It's really curious in many ways. Unexpected for sure. Unclear as to what causes this. It's certainly some new effect that we hadn't considered before."

The results are published as a pre-print on ArXiv.org and are being submitted for publication in a peer-reviewed journal.

The experiment was conducted at the Laboratori Nazionali del Gran Sasso, an underground particle physics facility in the Abruzzo Mountains of Italy, about 75 miles north of Rome. The research was conducted using the XENON Experiment's XENON1T Data Acquisition System.

"Really XENON1T is an experiment to search for dark matter. But in the process, we realized that there are much more physics we could observe with that machine," Lang said. "I had systematically scoped out the various physics analyses we could do with this detector, and in doing so, we stumbled across this excess. It's just due diligence. Or serendipity. Your pick.

"The question is: Is this some known physics, such as a tiny contamination with tritium, or is this the tip of the iceberg pointing to truly new physics, beyond what we know from textbooks? We simply don't know at this point."

The scientists are not saying that they have found dark matter, but that is one of several possibilities. The unexpected signals are similar to what might be seen from a radioactive isotope of hydrogen, tritium, as a type of artifact of the experiment. It could be the indication of previously unknown properties of neutrinos, the scientists said.

But what is causing excitement among the scientists is the possibility that this is an indication of a new type of particle. Perhaps the hypothetical solar axion.

Or it could be the big prize, that theorized particle known to scientists as a WIMP (weakly interacting massive particle), which is thought to constitute dark matter. Or not. Nobody is really sure at this point.

"We have the Standard Model of Particle Physics, and with the discovery of the Higgs Boson, that is now complete and really consistent. It's like a puzzle with no missing pieces. Except that we still have a bunch of questions that this model doesn't address. For example, what is dark matter? Why is there matter in the universe at all?" Lang said. "So, we expect that there is this entirely other puzzle that we can play with. These questions need answers, but we don't have our foot in the door of that one. The discovery of any new particle, such as axions, would be that foot in the door."

Luca Grandi, associate professor of physics at the University of Chicago, which is the lead U.S. institution for the project, said that he expects the next-generation detector, the XENONnT, will provide insights.

"The excess might be due to small traces of tritium, but the idea that we might be sitting on something more exotic is really exciting for us," he said. "Given our estimates, we expect that XENONnT will be able to distinguish among the various hypotheses in a few months of data taking, and this makes it even more worth the big effort made, early in the year, to seal the new detector before the pandemic lockdown kicked in."

The new detector, the XENONnT, is an upgrade to the XENON1T and has more and cleaner xenon, lower radioactive backgrounds and various other improvements to the experiment.

At Purdue, part of this work will be done on a miniature version of the XENON1T detector, which has 3 kilograms of xenon, compared with the 3,000 kilograms in the detector in Italy. But what this detector lacks in size, it makes up for in speed, Lang said.

"The one we have at Purdue has much faster turnaround, so we can study these background events in detail so we can disentangle them from potentially more interesting signals," Lang said.

The research in the United States is funded by the National Science Foundation.

Note to Journalists: A copy of the research paper is available from Steve Tally, steve@purdue.edu. The paper was published on ArXiv.org as a preprint on Wednesday (June 17). Lang is currently in Europe (six hours ahead of Eastern Daylight Time) but is available by phone, Whatsapp, Threema, or Skype.

We report results from searches for new physics with low-energy electronic recoil data recorded with the XENON1T detector. With an exposure of 1042kg × 226.9days and an unprecedentedly low background rate of 76 ± 2 stat events/(tonne × year × keV) between 1–30 keV, the data enables the most sensitive searches for solar axions, an enhanced neutrino magnetic moment using solar neutrinos, and bosonic dark matter. An excess over known backgrounds is observed below 7 keV, rising towards lower energies and prominent between 2–3keV. The solar axion model has a 3.5σ significance, and a three-dimensional 90% confidence surface is reported for axion couplings to electrons, photons, and nucleons. This surface is inscribed in the cuboid defined by gae < 3.7×10−12, gaegeff < 4.6 × 10−18, and gaegaγ < 7.6 × 10−22 GeV−1, and excludes either gae = 0 or gaegaγ = an gaegeff = 0. The neutrino magnetic moment signal is similarly favored over background at 3.2σ an and a confidence interval of μν ∈ (1.4, 2.9) × 10−11 μB (90% C.L.) is reported. Both results are in tension with stellar constraints. The excess can also be explained by β decays of tritium, which was initially not considered, at 3.2σ significance with a corresponding tritium concentration in xenon of (6.2 ± 2.0) × 10−25 mol/mol. Such a trace amount can be neither confirmed nor excluded with current knowledge of production and reduction mechanisms. The significances of the solar axion and neutrino magnetic moment hypotheses are decreased to 2.1σ and 0.9σ, respectively, if an unconstrained tritium component is included in the fitting. This analysis also sets the most restrictive direct constraints to date on pseudoscalar and vector bosonic dark matter for most masses between 1 and 210 keV/c2.