“The terrible tyranny that brought about World War II bestowed an unintended blessing on Indiana, Purdue University, and America when it sent the family of a young Steve Beering to our country,” said Purdue President Mitch Daniels. “His 18-year leadership of our institution was but one chapter in an epic life of serial achievement. He and Jane will rest together on our campus’s Slayter Hill, and forever in our memories and in the annals of the greatest Boilermakers.” 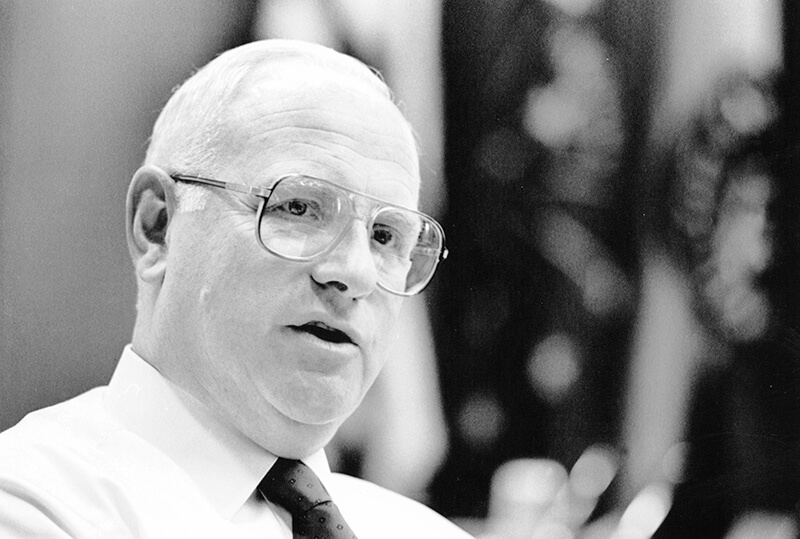 At the time of Beering’s retirement, his name had appeared on the diplomas of more than half of the university's living alumni. He called them all — alumni, students, faculty, staff and friends — the "Purdue family".

When asked once what he did for a living, Beering said, "I build people."

Beering came to Purdue after serving as dean of the Indiana University School of Medicine and director of the Indiana University Medical Center. Before that he had served 12 years in the Air Force, during which time he became an adviser to the U.S. surgeon general in internal medicine and a medical consultant to NASA, where he was a physician to the nation's first astronauts and to President Dwight Eisenhower. After leaving Purdue, he served on and chaired the National Science Board, an independent body of advisers to both the president and Congress on broad national policy issues related to science and engineering research and education. The Indiana Historical Society named Beering as a Living Legend in 2013 and paid tribute in this video.

Of all Beering's accomplishments, however, one of the most significant was the way he overcame the trauma of war and Nazi oppression and defied odds to become a physician and the leader of one of the world’s leading universities.

Beering was born Aug. 20, 1932, in Berlin and spent most of his early years in Hamburg, where his father, Stephen, managed two retail furniture stores before World War II. As the Allies rained bombs on Hamburg, he and his mother, Alice, and younger brother, John, sheltered with neighbors in their basement. A four-day raid in July 1943 set off firestorms and claimed 77,000 civilian casualties. It also destroyed their home, and left a million residents homeless. 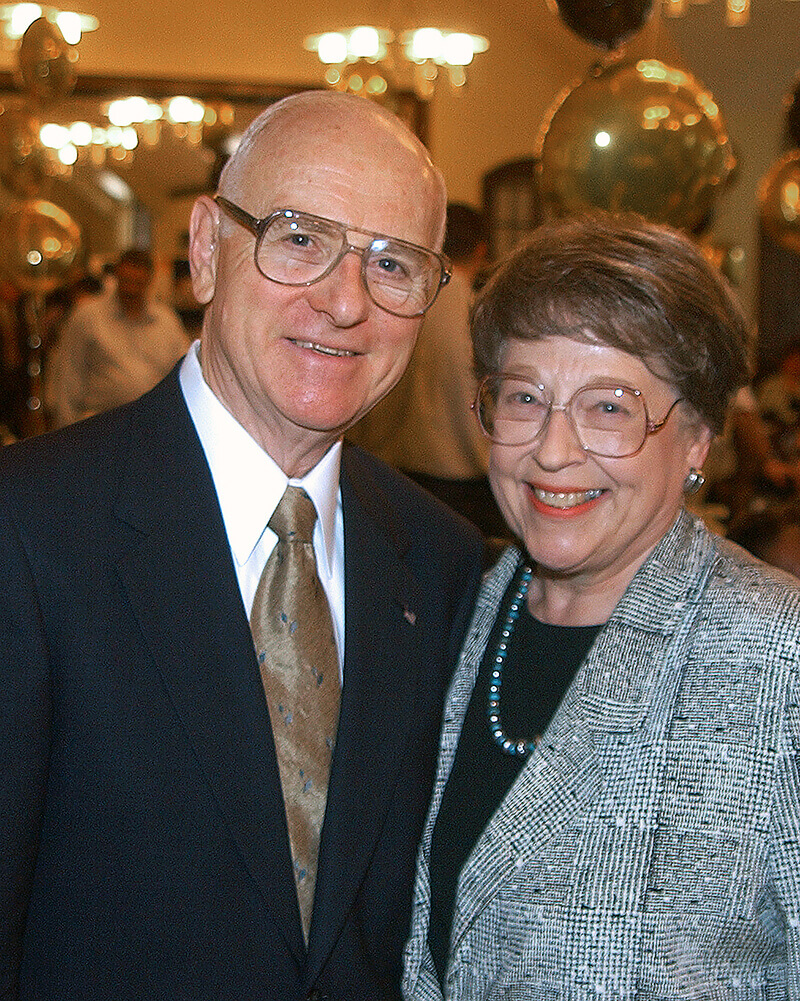 The boys and their mother were sent to work on a farm labor camp south of Nuremburg while their father in Berlin feared them dead. It would be years before their father tracked them down with the aid of the American Red Cross.

The future Purdue president was just 11 years old when he was taken to the camp. The war and its aftermath interrupted several years of his public schooling, but his mother, a French nurse, home-schooled her sons as much as circumstances allowed. After the war, the family returned to Hamburg, then moved to London with the assistance of cousins there, and finally arrived in New York Harbor on the MV Britannic on July 24, 1948.

“My father, my brother, and I were standing at the railing of the ship as it came into the harbor,” Beering said. “It was early in the morning and there was this fog. The mist parted, and there was a shaft of sunlight that hit the statue just as we were coming up to the Ellis Island area. It was magic, absolutely magic, just like in a movie. And my father said, ‘There she is, the Statue of Liberty. Never forget this moment. This is the signal to you to make something out of yourself.'"

The family settled near his grandparents in Pittsburgh when Beering was not quite 16. Years later, he reflected, "I had lost five years of school during the most formative years of a person's life." He had a lot of education to catch up on, yet he set his sights on becoming a physician.

"I wanted to make a difference and help people, and I wanted to go into medicine," he said. "I had seen so much disease and problems during the war years."

"That scholarship made an enormous difference. In fact, that's what gave me the idea years later for the Beering Scholarships at Purdue," he said. Beering raised private funds for the scholarship endowment, which covers all educational expenses for a bachelor's degree and the opportunity to pursue two other graduate degrees at Purdue and a medical degree at the Indiana University School of Medicine. The Beerings established a similar scholarship at the University of Pittsburgh. 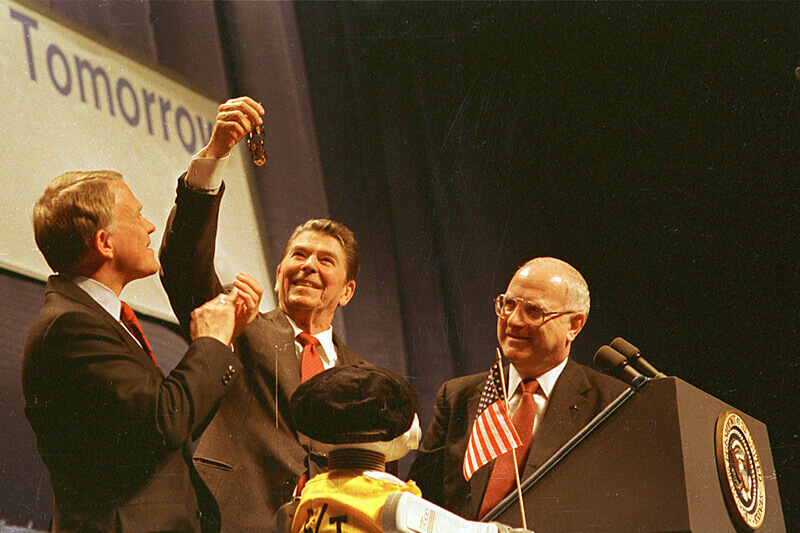 Beering always said that on the day he arrived at Purdue to be announced as its next president, it was a cold and cloudy February. As he and Jane approached the campus, however, "the biggest rainbow we ever had seen" appeared over the campus. They took it as an omen of good things to come.

Among the memorable events during his presidency, Beering hosted a visit by President Ronald Reagan and two reunions for Purdue's astronaut alumni, who now number 25. Two of those who attended, Neil Armstrong and Gene Cernan — the first and most recent people on the moon — also served as campaign chairs for Beering's largest fundraising effort, the Vision 21 Campaign, which raised more than $330 million. It was the largest campaign for any public university in Indiana at that time.

"Dr. Beering was very good at cultivating donors," said J. Timothy McGinley, the chairman of the Board of Trustees when Beering retired. "He was able to inspire and encourage people who wanted to give back so others could have the same life-transforming experience that they had had."

As the university grew, Beering often said, "There is no limit to what we can achieve if we don't care who gets the credit."

But those who worked with him credit his leadership, amazing memory, decisiveness, honesty, kindness, and his civility. His standard was excellence. "He also valued a classical education," said Joseph L. Bennett, former vice president for university relations.

"While respecting Purdue's mission to promote engineering, science and agriculture, Dr. Beering believed a well-rounded citizen should also embrace the arts, literature, and history. He was especially pleased to have the new Liberal Arts and Education Building named after him."

Beering also reached out to alumni classes, urging them to leave their mark on the campus, such as the Class of 1948 Bell Tower and Class of 1950 Lecture Hall. He gave special attention to raising funds to build Pao Hall for the Visual and Performing Arts and the Black Cultural Center.

Other construction projects completed under his administration in West Lafayette include Knoy Hall of Technology, the Materials and Electrical Engineering Building; Schleman Hall of Student Services; Nelson Hall of Food Science, Hillenbrand Hall, a student residence; Mollenkopf Athletic Center; a $32 million power plant expansion; and major additions to the engineering, veterinary medicine, and athletics complexes. Plans were begun for the expansion of the Krannert School of Management with a new building that would be known as Rawls Hall.

The campus was transformed. Under a revised master plan, it become pedestrian-friendly with fountains and park areas that include the Purdue Mall and fountain, Founders Park, and Academy Park.

Enrollment of international students grew threefold to become the largest at any public university. Purdue expanded its role as Indiana's engine for economic development, growing its research park and offering technical assistance to businesses.

Purdue's School of Technology took a statewide approach, offering courses and degree programs at locations around the state. Thanks in part to Beering's leadership during his days at the IU School of Medicine in Indianapolis, Indiana began to meet the demand for more physicians by opening pre-med programs at other existing facilities around the state, including at Purdue.

With his wife, Jane, he opened the president’s home, Westwood, for events for more than 10,000 Purdue family members every year.

"We always viewed this as a team job," Steven Beering said.

As Purdue’s first lady, Jane Beering not only was the university’s hostess, but she took photographs at almost every event and would include them with the 16,000 Christmas cards she sent each year to the many students, faculty, staff, friends and alumni their lives crossed. The Beerings rarely missed a Boilermaker football game or women’s or men’s basketball game.

As he finished his presidency, Beering summed up his thoughts saying; "We must recognize that our strength is people, especially people with ideas who are willing to innovate. That is what really energizes us to meet the needs of others around the world.”

Due to the COVID-19 pandemic there will not be immediate services. A celebration of life is planned for the future when conditions allow.

Memorial contributions for the Beering Scholars program should be mailed to the Purdue Foundation, 403 W. Wood St., West Lafayette, IN 47907-2007. Checks should be made payable to the Purdue Foundation, and the memo line should read "Beering Scholars in memory of Steve Beering." Contributions also may be made online at Giving.Purdue.edu/BeeringScholars.

Beering also served several Indiana civic institutions on their boards including the Indiana State Museum, the Eiteljorg Museum, and his alma mater, the University of Pittsburgh, as a member of the Board of Trustees (later named a lifetime trustee). He also continued to serve on a number of corporate boards of directors including Eli Lilly (where he was also lead outside director), ArvinMeritor, NiSource Inc, Guidant Corp., American United Life Insurance Co., and Veridian Corp.

Over his career Dr. Beering held senior positions on numerous national and state committees, boards of directors and educational policymaking groups. He is past president of the Association of American Universities and was co-chairman of the NCAA Presidents' Commission Subcommittee on Gender Equity. He is a member of the National Academy of Science/Institute of Medicine.

Note to Journalists: Photos of Steven C. Beering are available at www.purdue.university/BeeringPhotos.