Purdue University President Mitch Daniels made these remarks to Purdue University’s 2020 spring commencement graduates. More than 7,500 graduates could participate in the on-demand ceremony, and details are available in a release. The on-demand ceremonies are available at the 2020 Commencement website by scrolling to the Graduation Divisions and selecting the appropriate one. Daniels’ full speech is available here.

I never expected this. To be addressing you with me in an empty hall, and you far away.  Wherever you’re viewing this virtual ceremony, I hope you are surrounded by people you love, people who helped you reach this moment of achievement.

As is my practice, I wrote a commencement speech over last Christmas, at a time when COVID-19 had only recently gotten its name. I chose a theme without any clue what was coming.  In a different year, I might have felt obliged to start over. But as things have unfolded, the events of recent months have in some ways made my chosen topic seem at least as relevant as the day I wrote it. 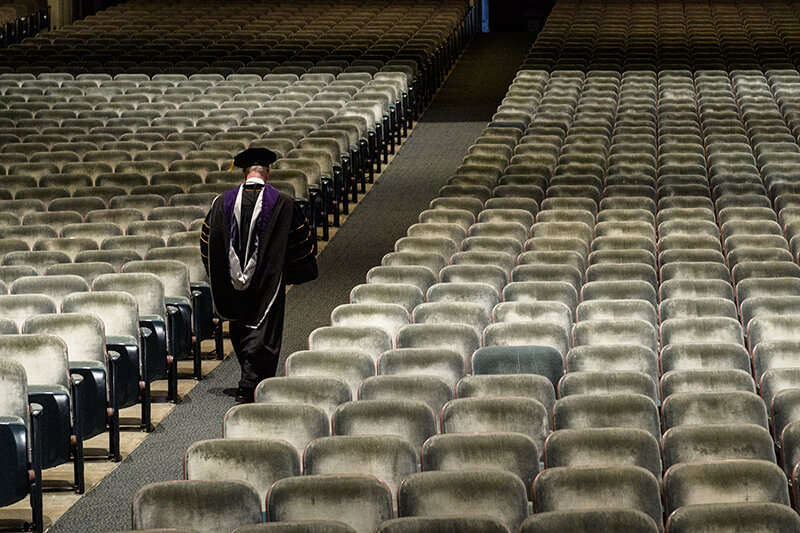 Our thoughts today should not be dominated and consumed by temporary troubles. Like all such things, this too shall pass. Today is about what you’ve accomplished these last few years, and all you’ll do in the decades ahead.  So here are some thoughts about that future; I hope you find they fit the occasion.

WEST LAFAYETTE, Ind. — Welcome, graduates and friends, to this day of celebration.  Those of you in the caps and gowns are gathered to celebrate the great accomplishment that is a degree from Purdue University. Meanwhile, your parents are, I know, quietly celebrating the clearing of the final tuition check. Congratulations to you all.

Purdue celebrated its own landmark this year, our 150th anniversary. Since it coincided with the 50th anniversary of the moon landing by our most famous alumnus, Neil Armstrong stories were abundant.  My favorite claims that, later in life, Commander Armstrong took to telling corny, lame jokes about the moon, and when nobody laughed he would say, “Well, I guess you had to be there.”

A year or so ago, a major national journalist visited our campus and later wrote a gracious, complimentary article about what he saw here. While I enjoyed his accounts of the progress and successful results he thought he had witnessed, my favorite part of the column was a single phrase, basically a throwaway line. He described Purdue as “a happy place.”

That got me wondering how many college campuses these days would strike a visitor quite that way. I hope it’s been that kind of place for you. We know you’ve worked hard and fought through a lot of pressure. You’ll probably remember that; just wait for those scary dreams where you haven’t studied for the test or can’t find the exam room. But I hope that, among your memories of these years, “I was happy there” is prominent among them.

I’ve reflected on that more and more during your last couple years with us.

Your parents love you and are proud of you, but from time to time they also must worry about you. That’s what we parents do. I hope it’s OK if I worry about you and your futures a little also. I’ve sometimes used these commencements to fret out loud about trends that trouble me in that big wide world you’re about to enter.

In recent years,  I’ve spoken about the tribalism that now divides Americans. I’ve talked about the seeming shortage of emotional resilience and grit in your peer group. Twice, I’ve found myself urging graduates to guard against the so-called Big Sort, the tendency for young people of your quality and educational attainment to cluster together professionally and socially and to drift apart from those of different backgrounds.

But one thing I never expected to worry about, but now do a little, is your being lonely. I have known you and met thousands of you personally in an environment that, despite our size, does a pretty good job of getting people together, creating bonds among them. A thousand clubs. Dozens of faith-based organizations. Our Greek system and, maybe our best examples of true communities, our co-op residential houses, where students not only live but cook, clean and do repairs together. And, most recently, the “learning communities,” where thousands of Boilermakers live in mutual support with others who are studying the same subject matter.

But elsewhere, the academic journals and lay periodicals are now filled with research about the “epidemic of loneliness” in our society. Surveys report record numbers of Americans living alone and suffering from strong feelings of isolation. Many view it as a new public health crisis, linked to rising rates of depression, anxiety, even suicide. A lack of strong social relationships has been found to raise the risk of premature death by 50%. That’s as bad for you as smoking 15 cigarettes a day. It’s not just an American phenomenon. The government of Britain has appointed a “minister for loneliness.” All this was before anyone heard of COVID-19.

Most startling, and alarming, are studies finding that the worst loneliness today is not among adults or the elderly but in your age group. Astonishing percentages of today’s young people say they have few if any close friends. Dating and other traditional forms of youthful interaction have declined sharply. The University of Southern California recently named a “director of belonging” and, while the title may be unique, I’m sure the idea is not. 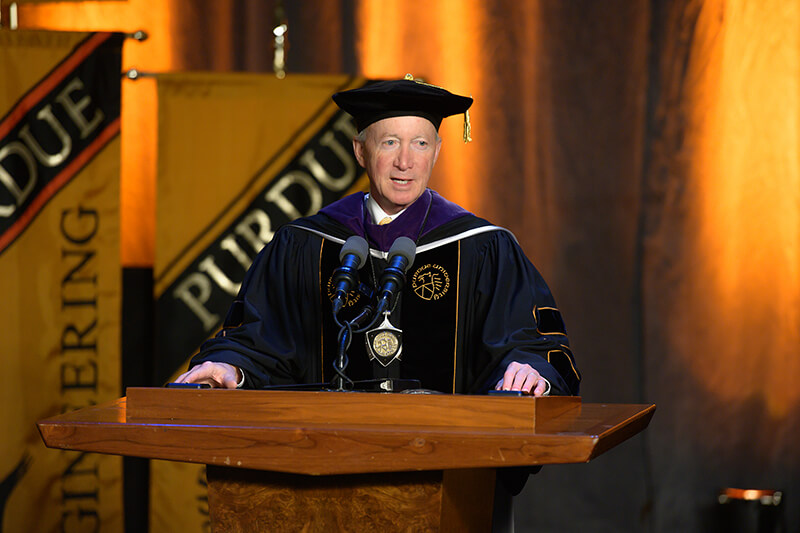 Humans are social creatures or, as sometimes said, “relational beings.”  The ability to interact, communicate, and collaborate is what defines us and what assured our evolution as the dominant, civilizing species on this planet. We thrive on contact with others; we suffer severely from its absence. The worst punishment we impose on a heinous criminal is solitary confinement; much of our literature and religious tradition thinks of hell as a state of total, permanent aloneness.

So an outbreak of loneliness is worth worrying about, especially where those with the longest to live are a big part of it. In the case of your elders, sociologists can identify some obvious causes.  Plummeting birthrates play a role: Having fewer children and fewer siblings limits the opportunity for caring contact. In a short two decades, the percentage of retirement-age citizens living within 10 miles of their children, in the same neighborhood with any relative, or having a good friend living nearby dropped by double digits. It’s easy to see how that leads to greater loneliness.

But particularly in the case of your age cohort, there is no doubt that the sudden eruption and dominance of what we call social media – I often think “antisocial media” would be a better term – has played a huge role. Some scholars put all the blame there. One major article was titled “Have Smartphones Destroyed a Generation?”

It wasn’t supposed to be this way. The original promise of all the Facebooks and Twitters was that they would connect us in wonderful new ways. But connection over a text message or what is often a glamorized presentation of one’s daily life just isn’t the same as in-person contact. In fact, it often turns out to separate and alienate its users more than it brings them together.

I remain concerned that, as members of the new knowledge aristocracy, absent a little special effort you will rarely make friends different from yourselves. Now, studying the growing evidence about isolation, I’m concerned that you, the first age group raised entirely in the iPhone era, won’t make many friends at all.

In my own college days, a briefly famous Harvard professor offered probably the worst advice ever given to a younger generation. Encouraging both drug use and a non-productive lifestyle, Dr. Timothy Leary suggested, “Turn on, tune in, drop out.”  Lately, I’ve been thinking the best advice one could give you, tomorrow’s leaders, might be the exact opposite: “Turn off, tune out, drop in.” As in turn off the phone more often, tune out the video screen, drop in personally on friends old and new.

For most of human history, personal contact was hard to avoid. Suddenly, our digital age can mean it requires extra effort.

Confession being good for the soul, it’s only right that I make one here. I am not a good role model for the advice I am foisting on you. I have not devoted the time I should have to deepen acquaintances into true friendships, or to stay in closer touch with the old friends I do have.

I’ve let the call of work get in the way. I’ve told myself that jobs of broad responsibility mean that one can’t get too close to co-workers and colleagues. I’ve procrastinated and rationalized, and skipped too many chances to spend meaningful time with people I admire and even love. I regret it, and I’m the worse for it.

You can do better. The same research that is documenting the loneliness epidemic reveals ways to immunize one’s self against it. Geographic rootedness makes a difference; people who live in the same community for extended periods are far less likely to be lonely. The great C.S. Lewis wrote, “Friendship is the greatest of worldly goods … the chief happiness of life. If I had to give a piece of advice to a young person about where to live, I (would) say ‘sacrifice almost everything to live near your friends.”

Having a religious affiliation also correlates strongly with feelings of connectedness. And nothing statistically reduces the chance of loneliness more than marriage, especially marriage with children. It’s a sermon for another Sunday, but I do hope most of you will not miss the joy, and the lifelong education, of raising children. I promise, it’s life’s greatest reward and the best graduate school you’ll ever attend.

I heard about one wise-guy commencement speaker who instructed his audience, “Remember, in life it’s not who you know. It’s whom.” I’ve thought of that as just a joke, but in our new situation it takes on a more serious tone: A lot of your success, and happiness, will depend on whom you know, and know well.

The author Gore Vidal once said, “We never know when we are happy, only when we were.”  I hope in your case that proves way too cynical, that there will be countless moments when you are truly happy and know it. But I also hope that, when you reflect back on times when you were happy, your days at this university will rank high among them. And when people ask you, “What was it about Purdue that made it such a great place for you?” you can just answer, “Well, I guess you had to be there.”

I know great achievements lie ahead for you. My wish for you is that so do great friendships.

Hail Purdue, and each of you.

Note to Journalists: Photos and B-roll of Purdue President Mitch Daniels delivering his commencement address are available on a Google Drive.