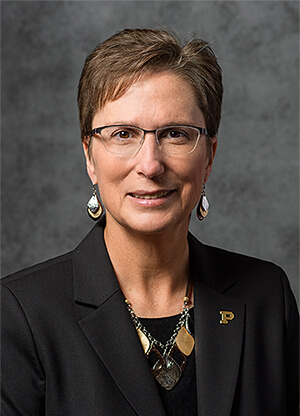 Trustees Michael Klipsch and Gary Lehman were reappointed to serve three-year terms, while Theresa Carter was elected by the Purdue Alumni Association to begin a three-year term. All are effective July 1.

Carter, of Colorado Springs, Colorado, is a 1985 Purdue graduate with a Bachelor of Science degree in industrial engineering. A retired major general in the United States Air Force, her distinguished 31-year career included being the first female promoted to one-star general within her career field and then later receiving a second star. She was the keynote speaker at Purdue’s December 2018 commencement, and is a Purdue Distinguished Engineering Alumna (2013), an Outstanding Industrial Engineer (2010), and a member of both the Purdue Alumni Association Board of Directors and the Industrial Engineering Advisory Council.

Carter is one of three alumni trustees, joining Vanessa Castagna and Malcolm DeKryger. She replaces Tom Spurgeon, who retired after serving on the board since 2005, including stints as chairman (2013-15) and vice chairman (2011-13 and 2015-20), as well as serving as chair of the Compensation Committee and Audit and Risk Management Committee.

Klipsch, of Carmel, Indiana, has served on the board since 2015. He earned a bachelor’s degree in industrial management from Purdue in 1985. He is co-founder of Klipsch-Card Athletic Facilities LLC, which develops and manages state-of-the-art sports parks and fieldhouses.

Lehman, of Lafayette, Indiana, has served on the board since 2010. He is a 1974 Purdue graduate with a bachelor's degree in industrial management. He is the retired chairman of the board of Oerlikon Fairfield and president of Oerlikon AG-Americas, and founder of Cannelton Group, a firm specializing in providing management services to underperforming, privately held manufacturing companies.

A news release from the governor’s office is available online.

Note to Journalists: A photo of Theresa Carter is available on Google Drive.