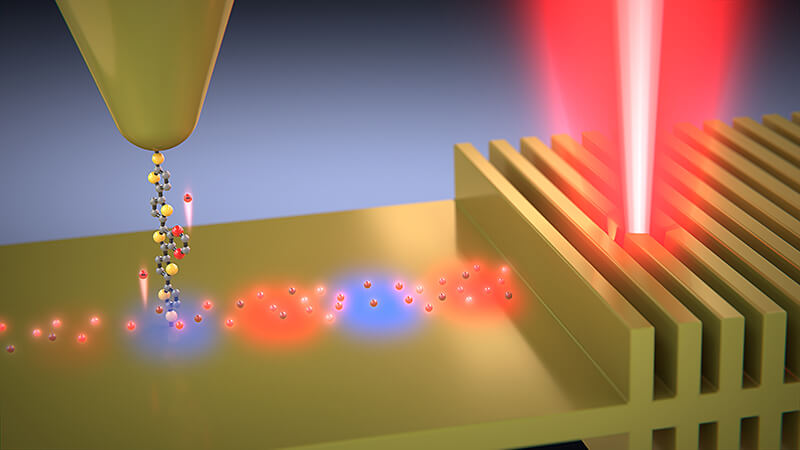 Researchers developed a technique that uses a scanning tunneling microscope integrated with lasers and other optical components to trap appropriate molecules and measure the energy distribution of hot electrons in a thin gold film. (Illustration by Enrique Sahagún) Download image

But scientists haven’t been able to measure the energies of those electrons, limiting their use. Researchers at Purdue University and the University of Michigan built a way to analyze those energies.

“There have been many theoretical models of hot electrons but no direct experiments or measurements of what they look like,” said Vladimir “Vlad” Shalaev (shal-AYV), Purdue University’s Bob and Anne Burnett Distinguished Professor of Electrical and Computer Engineering, who led the Purdue team in this collaborative work.

In a paper published in the journal Science on Thursday (June 4), the researchers demonstrated how a technique using a scanning tunneling microscope integrated with lasers and other optical components reveals the energy distribution of hot electrons.

“Measuring energy distribution means quantifying how many electrons are available at a certain amount of energy. That crucial piece of information was lacking for expanding the use of hot electrons,” said Harsha Reddy, a Ph.D. student in Purdue’s School of Electrical and Computer Engineering and an equally contributing lead author on this paper.

Hot electrons are typically generated through shining a certain frequency of light on a carefully engineered nanostructure made of metals such as gold or silver, exciting so-called “surface plasmons.” These plasmons are believed to eventually lose some of their energy to electrons, making them hot.

While hot electrons can have temperatures as high as 2,000 degrees Fahrenheit, it’s their high energy – rather than the material temperature – that makes them useful for energy technologies. In solar panels, energies from hot electrons could be more efficiently converted to electrical energy compared to conventional approaches.

Hot electrons also could improve the efficiency of energy technology such as hydrogen-based fuel cells in cars by speeding up chemical reactions.

Reddy worked with Kun Wang, a postdoctoral researcher in a University of Michigan group under professors Edgar Meyhofer and Pramod Reddy, who co-led the research effort. Together, they spent more than 18 months developing the experimental setup and another 12 months measuring the hot electron energies.

The researchers built a system that allowed them to detect the difference in charge currents generated with and without exciting the plasmons. This difference in currents contains the crucial information needed to determine the energy distribution of the hot electrons in the metallic nanostructure.

Shining a laser light onto a gold film with tiny ridges excites plasmons in the system, generating hot electrons. The researchers measured the energies of the electrons by drawing them through carefully engineered molecules into a gold electrode at the tip of a scanning tunneling microscope. Researchers at the University of Liverpool synthesized some of the molecules for these experiments.

This method could be used for enhancing a wide range of energy-related applications.

“This multidisciplinary basic research effort sheds light on a unique way to measure the energy of charge carriers. These results are expected to play a crucial role in developing future applications in energy conversion, photocatalysis and photodetectors, for instance, that are of great interest to the Department of Defense,” said Chakrapani Varanasi, a program manager for the Army Research Office, which supported this study.

The work also was supported by the U.S. Department of Energy, the U.S. Office of Naval Research, and the Air Force Office of Scientific Research.

Note to Journalists: For a copy of the paper, please contact Kayla Wiles, Purdue News Service, at wiles5@purdue.edu. An illustration of the experimental setup for measuring hot electrons is available via Google Drive.

#These authors contributed equally to this work.

Hot-carriers in plasmonic nanostructures, generated via plasmon decay, play key roles in applications like photocatalysis and in photodetectors that circumvent band-gap limitations. However, direct experimental quantification of steady-state energy distributions of hot-carriers in nanostructures has so far been lacking. We present transport measurements from single molecule junctions, created by trapping suitably chosen single molecules between an ultra-thin gold film supporting surface plasmon polaritons and a scanning probe tip, that can provide quantification of plasmonic hot-carrier distributions. Our results show that Landau damping is the dominant physical mechanism of hot-carrier generation in nanoscale systems with strong confinement. The technique developed in this work will enable quantification of plasmonic hot-carrier distributions in nanophotonic and plasmonic devices.