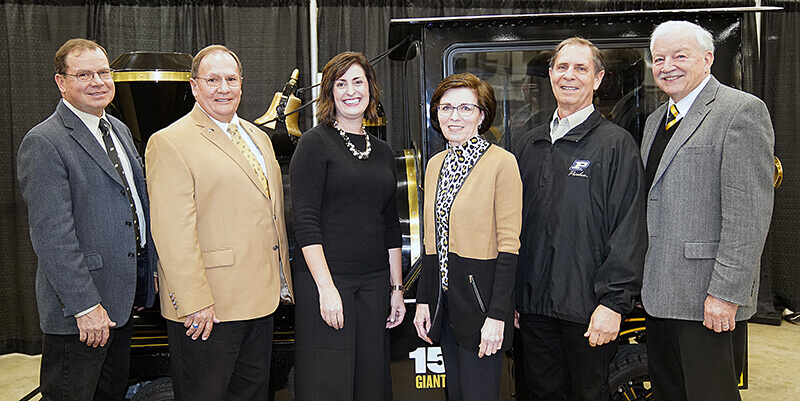 WEST LAFAYETTE, Ind. – Six graduates of the Purdue University College of Agriculture were recognized as recipients of the Agricultural Alumni Association’s highest honor – the Certificate of Distinction – during the annual Ag Alumni Fish Fry on Feb. 1 at the Indiana State Fairgrounds.

The Certificate of Distinction is presented annually to professionals who have contributed significantly to agriculture, forestry or natural resources through career accomplishments, organizational involvement, community service and other activities.

This year’s winners are:

Indiana’s agbioscience sector is gaining national – and international – attention, in large part because of the efforts of AgriNovus, led by Bechdol. By attracting innovative companies focused on plant science, animal health and nutrition, human food and nutrition and high-tech agriculture, Bechdol has helped the state become a leader in this arena.  For five years Bechdol has been president and CEO of AgriNovus Indiana, the state’s initiative focused on advancing the agbioscience sector as a nationally recognized leader.

“I believe Beth’s hallmark service has been in the formation and leadership of AgriNovus Indiana,” said Greg Deason, senior vice president of entrepreneurship and place making, Purdue Research Foundation. “She worked to strengthen, align and connect people and resources in the agbiosciences. Her service to AgriNovus made an impact on Indiana and beyond.”

After earning her bachelor’s degree at Georgetown University, Bechdol completed a master’s degree in agricultural economics from Purdue University. Early in her career, she worked for the U.S. Senate Agriculture Committee and the USDA’s Farm and Foreign Agricultural Services in Washington, D.C. In 2005, she became the first deputy director of the new Indiana State Department of Agriculture.

Prior to her leadership of AgriNovus, Bechdol was director of agribusiness strategies at Indianapolis-based law firm Ice Miller LLP and also president of the Agribusiness Council of Indiana.

With her recent appointment as deputy director general at the Food and Agriculture Organization (FAO) of the United Nations, Bechdol will lead several programs as well as a new office of innovation at the agency focused on reducing world hunger. She will be based in Rome.

In 33 years, more than 3,300 students have passed through Griffin’s high school classroom. He has been an agricultural sciences teacher and co-advisor of the Rossville Junior/Senior High School FFA chapter since graduating from Purdue University with a master’s degree in agricultural education.

From state FFA and 4-H contests to community service projects, Griffin provides a host of opportunities for students to take what they learn in his classroom and put it into action in their community.

Annually, Griffin oversees student crews as they landscape 20 homes in the community. In 2019, Rossville FFA members picked more than 4,300 dozen ears of sweet corn (51,000 ears) worth $13,000 at Meadow Lane Farms in Frankfort to donate to local food banks and other organizations.

“Dale views all of his teaching, advising and coaching in school, FFA and 4-H as continuous and interwoven,” said Natalie Carroll, a professor in the Department of Agricultural Sciences Education and Communication, Purdue University. “He is motivated to assist youth in any way he can to help them learn and become competent, caring adults.”

He has had an impact on the state’s current crop of agricultural educators as well, welcoming many aspiring teachers into his classroom. Griffin has served as a cooperating teacher for 17 Purdue agricultural education student teachers since 1990 – 14 of those individuals are still teaching today.

After graduating from Purdue University, Hadley started his career at Maumee Valley Seeds Inc. in 1975, spending 12 years in various roles, including research manager, before leaving to farm full-time. He currently grows corn and soybeans, and raises cattle for freezer beef.

“His commitment to production agriculture is unparalleled as is his commitment to improving the Indiana agricultural industry,” said Chris Novak, former CEO of Indiana Soybean Alliance and current CEO of Croplife America. “Roger approaches all his work with a zeal and enthusiasm that helps ensure success.”

Over the last 30 years, Hadley has recruited hundreds of farmers as members of the state and national soybean organizations. In 2007, he received the American Soybean Association Membership Lifetime Achievement Award for his efforts.

Hadley has given back to Purdue University as past president of the Ag Alumni Association board of directors and a representative on the Purdue alumni board. He served on the dean’s advisory council and the Department of Agronomy advisory council. In 2008, Hadley received the College of Agriculture Distinguished Alumni Award for the Department of Agronomy.

“Roger is a great ambassador for Purdue and role model for young people who desire to have careers in agriculture. His love of agriculture and energy will provide benefits to many for years to come,” said Bill Johnson, Purdue professor of weed science.

Legan and his wife, Phyllis, have built a livestock and grain operation in west central Indiana, bringing their daughter and son-in-law on board in recent years and forming partnerships with other family farms around Indiana to raise pigs for the farm.

Serving the agriculture industry has been a priority for Legan, who currently serves on the U.S. Meat Export Federation, Indiana Soybean Alliance, and on the Indiana State Board of Animal Health as the swine industry representative.

“He has had a successful professional career, but his passion for sharing and helping others is what makes him stand out,” said Don Villwock, former president of Indiana Farm Bureau. “What sets him apart is that he has always gone above and beyond what is expected of him.”

Legan and his family take environmental stewardship and soil health seriously. He received the American Soybean Association Conservation Legacy Award in 2014, and the family was recognized as a River-Friendly Farm by the Indiana Association of Soil and Water Conservation Districts in 2016.

In December 2019, McKee retired from her role as assistant director of Purdue Extension and 4-H youth development program leader, but the programming she built will continue to shape Indiana youth for years to come.

From the makers’ space in the 4-H buildings at the Indiana State Fair to the “Teens as Teachers” program, a common theme in McKee’s work over the last 40 years was providing youth with hands-on experience consistent with 4-H’s mission of “learn by doing.”

“Dr. McKee is passionate about providing youth the skills to teach, mentor and give back to their community. As she has stated many times, who better to talk about the 4-H youth development program than youth themselves?” said Tony Carroll, Purdue Extension specialist in 4-H youth development.

McKee secured more than $22.7 million in grants to support 4-H youth development programming across the state in a variety of areas, including sustainable communities, youth mentoring, economic education, and alcohol, drug and tobacco prevention.

McKee’s impact goes beyond the Indiana 4-H program. In addition to several programs she helped develop now used in other states, she served on multiple committees, helping mold the future of the 4-H Youth Development Program nationally.

After earning bachelor’s and master’s degrees in forestry from Purdue University, Smith went on to a 40-year career with the U.S. Forest Service, helping to modernize forestry inventory, analysis and reporting in the United States and globally.

Smith served as associate national program leader for the U.S. Forest Service before retiring in 2017. In his 26 years in that role, he led three strategic plans for the national Forest Inventory and Analysis program and contributed to four global assessments by the United Nations Food and Agriculture Organization.

“His work to advance inventory methods and our knowledge about forest resources has helped improve how we fulfill our mission of sound, sustainable forest management,” wrote Thomas Tidwell, former chief of the U.S. Forest Service, in a letter to Smith upon his retirement.

While his scientific contributions to the industry were significant, including authoring or co-authoring 195 scientific and technical publications, Smith’s ability to communicate forest data across audiences also allowed him to build coalitions important to advancing the work of the forest service. He developed a U.S. Forest Resource Facts and Trends brochure that was translated into six languages and has helped counter criticism internationally on how U.S. forests were managed.

In addition to his professional contributions, Smith also mentored young professionals in the industry and advocated for a diverse workforce, especially within the forest service. He returned to Purdue multiple times during his career to speak with undergraduates interested in forestry careers.