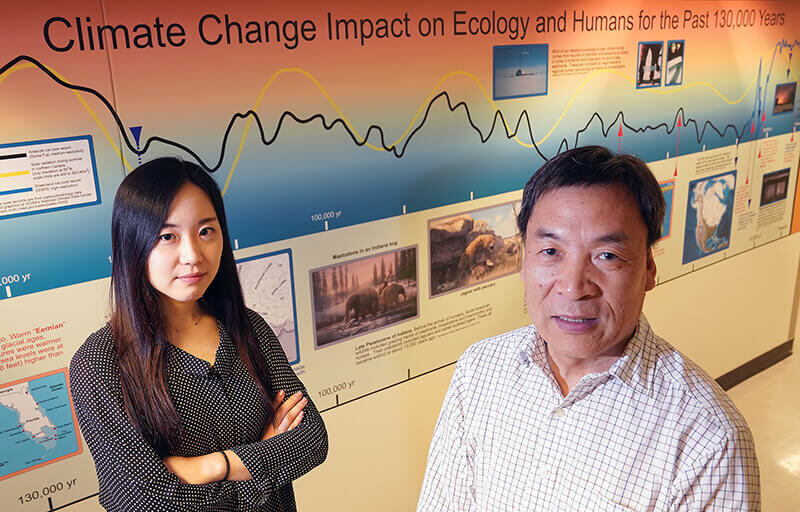 Youmi Oh (left) and Qianlai Zhuang’s research has revised estimates of net methane emissions from the Arctic. Their modeling considers not only methane emitted by wetland methanogens, but also methane consumed by upland methanotrophs and the effects of these microbes in a warmer climate. (Purdue Agricultural Communication photo/Tom Campbell) Download image

WEST LAFAYETTE, Ind. — Rising global temperatures are expected to thaw Arctic permafrost, reinvigorating the microorganisms that live in the region’s carbon-rich soils. When that happens, those microbes will begin consuming the carbon stored in the permafrost and emitting massive amounts of methane, one of the most powerful greenhouse gases on the planet.

This injection of methane into the atmosphere is a concern for climate scientists worried that it will exacerbate global warming. But Purdue University scientists say that while there will likely be more methane — and still a concerning amount — the net emissions from the Arctic may be much smaller than expected.

Qianlai Zhuang, a professor in the departments of Earth, Atmospheric, and Planetary Sciences and Agronomy, and Youmi Oh, a graduate student in Zhuang’s lab, say that permafrost thaw increases not only methane production in Arctic wetlands but also methane consumption in upland areas. Upland dry and mineral-based soils account for 87% of Arctic soils and are rich in microbes called methanotrophs that consume methane.

“This group of bacteria utilizes atmospheric methane as an energy source,” Zhuang said. “The emissions from wetlands will potentially be quite large, but if you consider the uplands, then the area-aggregated net emissions will be much smaller than previously thought.”

In contrast, scientists discovered novel methanotrophs in Arctic mineral uplands. These high-affinity methanotrophs require less than 1% of the methane concentration level that allows their wetland counterparts to thrive. That means they can survive and reproduce on atmospheric methane concentration levels and can pull methane from the atmosphere.

Zhuang and Oh included the role of these microorganisms in methane consumption into a biogeochemical model and found that they significantly reduce the net regional methane emissions to the atmosphere. Their results were published today (March 30) in the journal Nature Climate Change. 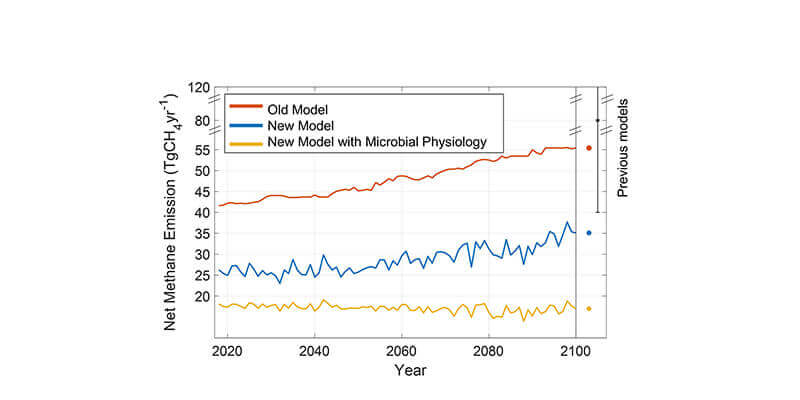 Their findings more closely resemble recent observed trends in methane levels in the Arctic where emissions have increased, but atmospheric accumulations have not increased as quickly as models had simulated.

“We do believe that Arctic methane emissions will increase by the end of this century as other studies have shown, but the net increase to the atmosphere will be much smaller once upland methanotrophs are taken into consideration,” Oh said. “It was even possible in our simulation that net emissions decrease because high-affinity methanotrophs survive better than methanogens in response to warming.”

While smaller net methane emissions sound good at first glance, Zhuang and Oh warn that the scenario would be dependent on higher global temperatures.

“We could see Arctic methanotrophs consume more methane than the region is producing, but that would require even more warming,” Zhuang said. “And it’s important to remember that this is only one part of the planet. It doesn’t account for greenhouse gases produced in other regions.”

Zhuang and Oh will continue to monitor Arctic methane emissions and improve their model. They believe they’ve added a critical component required to better understand net methane emissions, but they say that current models will need to adapt to provide more accurate projections.

“The model we use assumes that wetland and upland areas will not change in the future,” Oh said. “We know, however, that changes in temperature, precipitation and other factors will impact areal dynamics of wetland vs. upland, thus methane emissions.”

Methane emissions from organic-rich soils in the Arctic have been extensively studied due to their potential to increase the atmospheric methane burden as permafrost thaws. However, this methane source might have been overestimated without considering high-affinity methanotrophs (HAMs, methane-oxidizing bacteria) recently identified in Arctic mineral soils. Herein we find that integrating the dynamics of HAMs and methanogens into a biogeochemistry model that includes permafrost soil organic carbon dynamics leads to the upland methane sink doubling (~5.5 TgCH4yr−1) north of 50 °N in simulations from 2000–2016. The increase is equivalent to at least half of the difference in net methane emissions estimated between process-based models and observation-based inversions, and the revised estimates better match site-level and regional observations. The new model projects doubled wetland methane emissions between 2017–2100 due to more accessible permafrost carbon. However, most of the increase in wetland emissions is offset by a concordant increase in the upland sink, leading to only an 18% increase in net methane emission (from 29 to 35 TgCH4yr−1). The projected net methane emissions may decrease further due to different physiological responses between HAM and methanogens in response to increasing temperature.