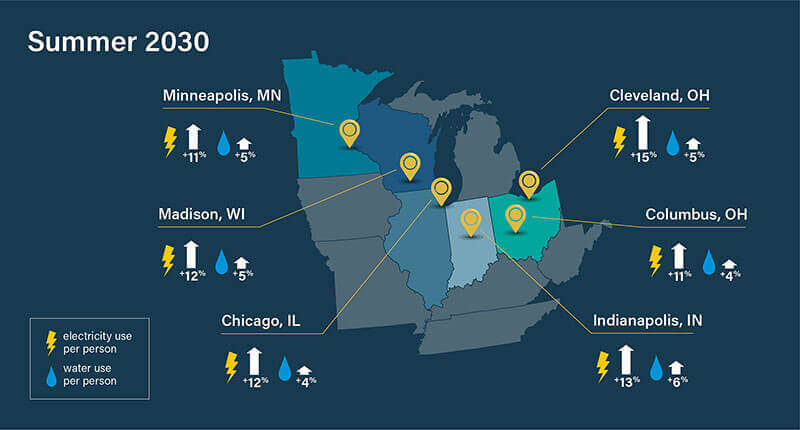 A model more accurately predicts how much summertime electricity and water use could increase due to climate change between 2030 and 2052, when global warming is expected to increase by 1.5 degrees Celsius. These projections only consider the effects of climate; not other factors such as population growth or technological shifts. (Purdue University infographic/Greg Simmons)

WEST LAFAYETTE, Ind. — By 2030, global warming alone could push Chicago to generate 12% more electricity per person each month of the summer.

If the city generated any less electricity, it would be risking a power shortage that may require drastic measures to avoid rolling blackouts, according to projections from a model designed by Purdue University researchers.

That estimated increase is larger than previous projections because it takes into account how consumers use electricity and water at the same time. The model also considers a wider range of climate features that affect this mixed use, such as humidity and wind speed, making predictions more accurate.

Consumers use both electricity and water when running a dishwasher, heating water or landscaping. Cities also use water to generate electricity, and electricity to treat and distribute water. 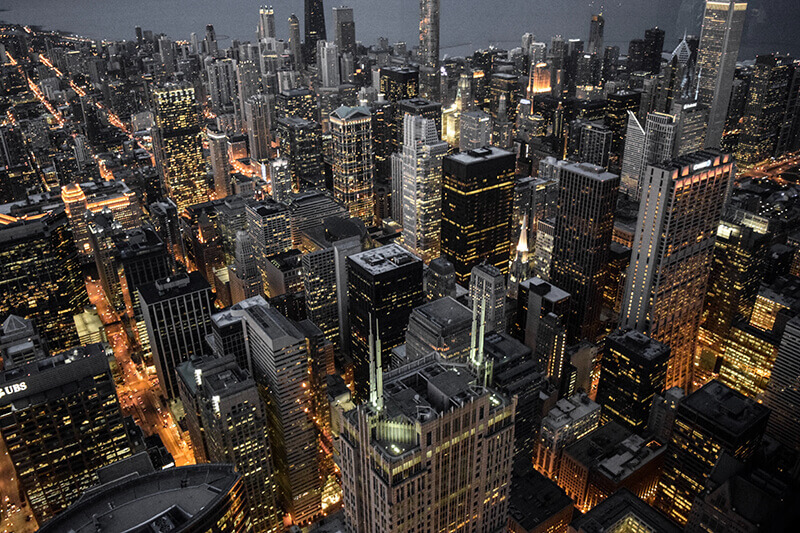 Cities such as Chicago could experience blackouts by 2030 if they don’t prepare to meet projected increases in electricity and water use due to climate change, a new study reports. (Credit: Stock photo/Pexels) Download image

For a windy city like Chicago, wind speed matters when estimating electricity and water use. Temperature might play a larger role in the Southwest, where droughts occur.

Nateghi’s team partnered with Rohini Kumar, a postdoctoral researcher at the Helmholtz Centre for Environmental Research – UFZ in Leipzig, Germany, to develop the model.

In a study published Thursday (March 5) in the journal Climatic Change, the collaborative team applied this model to five other cities in the U.S. Midwest: Cleveland; Columbus, Ohio; Indianapolis; Madison, Wisconsin; and Minneapolis.

As a whole, the model projected that the Midwest will be using 19% more electricity and 7% more water. And that’s just during the summer.

The researchers started with the Midwest because the region typically experiences distinct seasons, but the model could be applied to any region.

While the model’s projections don’t yet take into account population growth or technological shifts, such as increased electric vehicle use, a common baseline model that utilities currently use to predict climate impact considers only how temperature and precipitation affect electricity and water use.

The model developed by Nateghi’s lab considers those variables, as well as relative humidity, wind speed and large-scale climate phenomena, such as El Niño, which often leads to more mild winters in the Midwest.

“Adding in these other variables makes the model more representative of future climate-change scenarios,” said Renee Obringer, the first author on this study and a Ph.D. candidate in environmental and ecological engineering at Purdue.

The model uses artificial intelligence to make predictions on climate change impact. As a learning algorithm, the model is fed years of data from a region’s utilities and weather services and then trained to predict changes in electricity and water use given certain climate-change scenarios.

These scenarios are when the earth’s temperature increases by 1.5 or 2.0 degrees Celsius above its mean temperature during the pre-industrial period, approximately 1881-1910.

“Such scenarios are fundamental for understanding the joint response of electricity and water uses to future changes in climatic conditions as to understand to what degree our current management and technological strategies need to adapt to the future changes.” Kumar said.

The researchers found that on average for each city analyzed in this study, there could be a 10%-20% increase in electricity and 2%-5% increase in water during the summer due to a warming climate.

“A baseline model only looking at temperature and precipitation is used over and over again to develop policies. In the future, there could be significant shortages in water and electricity supply because these models have been significantly underestimating what the actual demand would be,” Obringer said.

While there’s always room for more accuracy, the researchers believe that the level of accuracy achieved by this model should warrant its use now by utilities and city planners to form more effective policies.

“This model provides a much better sense of potential risk for variability and change,” Nateghi said.

This work was funded by the National Science Foundation (grants 1826161 and 1832688) and the Purdue University Center for the Environment.

Note to Journalists: This release is a reissue of a March 5 release to include an infographic on the study’s findings. For a copy of the paper, please contact Kayla Wiles, Purdue News Service, at wiles5@purdue.edu or 765-494-2432. The infographic and a photo of Chicago are available in a Google Drive folder at https://purdue.university/2xfbKJp.

Managing the Water-Electricity Demand Nexus in a Warming Climate

Models that consider the interconnectivity between urban systems, including water and electricity, are becoming more common, both in research and in practice. However, there are still too few that consider the impact of climate change, and fewer still that look beyond the baseline climate data (i.e., precipitation and temperature). Here, a data-driven, regional model that considers a wider array of climate variables is built and tested to evaluate the impact of climate change on the coupled water and electricity demand nexus in the Midwestern United States. The model, which is based on a state-of-the-art statistical learning algorithm, is first used to compare model runs comprised of different climatic variables. The model runs included a Baseline model that considered only precipitation and temperature, as well as a Selected Feature model that considered a wider array of climatic variables, including relative humidity and wind speed. Following this comparison, the model is used to make future projections of the coupled water and electricity demand as a function of future climate change scenarios. The results indicate that (1) the inclusion of additional climate variables beyond the Baseline provides a significant improvement in predictive accuracy, and (2) the climate-sensitive portions of summer electricity and water use are expected to increase in the region by 19% and 7%, respectively. Finally, the regional scale model was leveraged to make city-level projections, indicating a 10-20% (2-5%) increase in electricity (water) use across the analyzed cities due to a warming climate.