WEST LAFAYETTE, Ind. — A dumbbell-shaped nanoparticle powered just by the force and torque of light has become the world's fastest-spinning object.

Scientists at Purdue University have created the world's fastest-spinning human-made object and the most sensitive torque detector by suspending a nanoparticle in a vacuum with a laser, and then using a second laser to test its torque sensitivity. (Purdue University image/Jonghoon Ahn) Download image

Scientists at Purdue University created the object, which revolves at 300 billion revolutions per minute. Or, put another way, half a million times faster than a dentist's drill.

In addition, the silica nanoparticle can serve as the world's most sensitive torque detector, which researchers hope will be used to measure the friction created by quantum effects.

The research was published this week in Nature Nanotechnology.

The researchers levitated the object in a vacuum using light in the form of a laser, and then used a second laser with a polarizing plate to alternate the optical torque on the object in order to test its torque detection sensitivity. 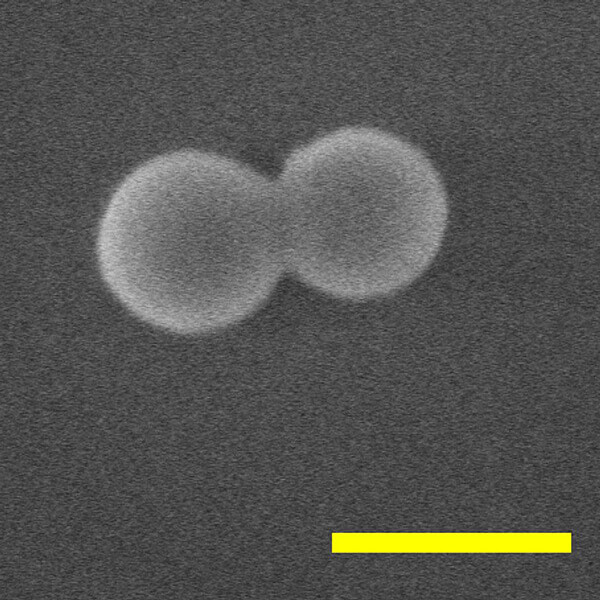 The fastest-spinning object ever created is a nano-scale rotor made from silica at Purdue University. This image of the rotor at rest was created using a scanning electron microscope. For scale, the yellow bar in the image is 200 nanometers. (Purdue University photo/Jaehoon Bang) Download image

In 2018, Li and his colleagues had set the previous world record for the fastest-spinning object with a similar device that was one-fifth as fast.

Hearing that the nanoparticle is powered by light could lead one to mistakenly think that the particle contains some sort of solar-powered capability. In fact, light itself exerts a miniscule, but measurable, amount of force on nearly any object.

You may not be able to feel it physically (only emotionally perhaps), but the light from those fluorescent lights in your office is literally and constantly pressing down on you because of something known as light radiation pressure. It's a force millions of times weaker than the gravity on you, but it is still there. In space, light can even propel satellites using light sails.

"In the 1600s Johannes Kepler saw that the tails of comets always pointed away from the sun because of radiation pressure," Li says. "We use the same thing, but with concentrated lasers, to levitate and rotate the nanoparticles."

In addition to the new track record in terms of rotation speed, the nanoparticles can measure torque at levels 600–700 times more sensitive than any device before.

Li says this nano-torque detector will be used to measure and investigate quantum effects such as vacuum friction.

It's theorized that even objects in a vacuum levitated by light experience some very minuscule level of drag caused by virtual photons, a quantum fluctuation in a vacuum that is limited by the uncertainty principle. The nano-torque detector could also be used to measure related effects, including the Casmir effect and nanoscale magnetism, which could eventually allow engineers to develop and control nanoelectronic devices.

Torque sensors such as the torsion balance enabled the first determination of the gravitational constant by Henri Cavendish1 and the discovery of Coulomb’s law. Torque sensors are also widely used in studying small-scale magnetism2,3, the Casimir effect4 and other applications5. Great effort has been made to improve the torque detection sensitivity by nanofabrication and cryogenic cooling. Until now, the most sensitive torque sensor has achieved a remarkable sensitivity of 2.9 × 10−24 N m Hz−1/2 at millikelvin temperatures in a dilution refrigerator6. Here, we show a torque sensor reaching sensitivity of (4.2 ± 1.2) × 10−27 N m Hz−1/2 at room temperature. It is created by an optically levitated nanoparticle in vacuum. Our system does not require complex nanofabrication. Moreover, we drive a nanoparticle to rotate at a record high speed beyond 5 GHz (300 billion rpm.). Our calculations show that this system will be able to detect the long sought after vacuum friction7,8,9,10 near a surface under realistic conditions. The optically levitated nanorotor will also have applications in studying nanoscale magnetism2,3 and the quantum geometric phase11.