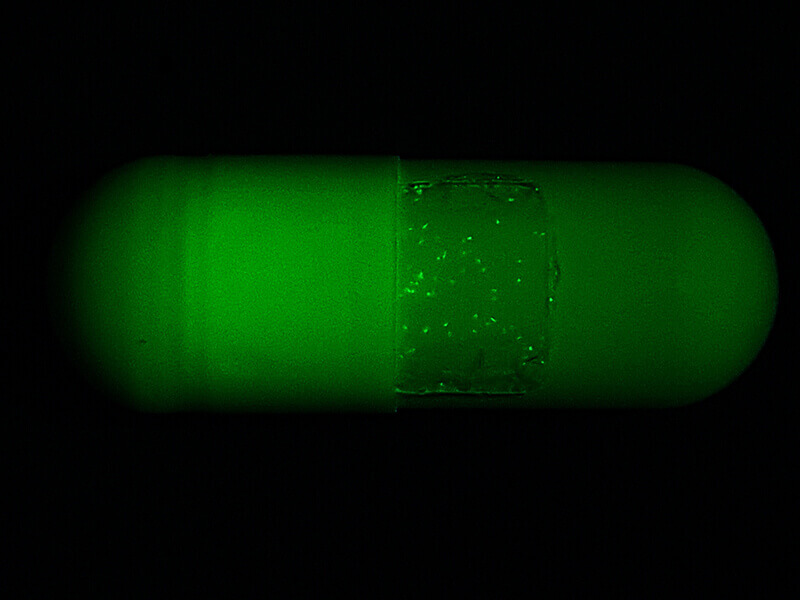 Researchers have created a silk film “security tag” to go on the surface of drug capsules. The photo was taken with a green filter for visibility. (Purdue University photo/Jung Woo Leem) Download image

Purdue University researchers are aiming to stump counterfeiters with an edible “security tag” embedded into medicine. To imitate the drug, a counterfeiter would have to uncrack a complicated puzzle of patterns not fully visible to the naked eye.

The work is published in the journal Nature Communications. A YouTube video is available at https://youtu.be/0bN1qODhRPU.

Fake medicine is a thriving business, making up at least 10% of global pharmaceutical commerce while also claiming thousands of lives each year.

In the U.S., counterfeit drugs range from cancer and diabetes treatment to erectile dysfunction medication. Counterfeit opioids have caused deaths in 46 states.

Tagging drugs would not only guard against fakery, but also help pharmacies better verify the legitimacy of a drug before selling to consumers.

“Every single tag is unique, offering a much higher level of security,” said Young Kim, an associate professor in Purdue’s Weldon School of Biomedical Engineering. 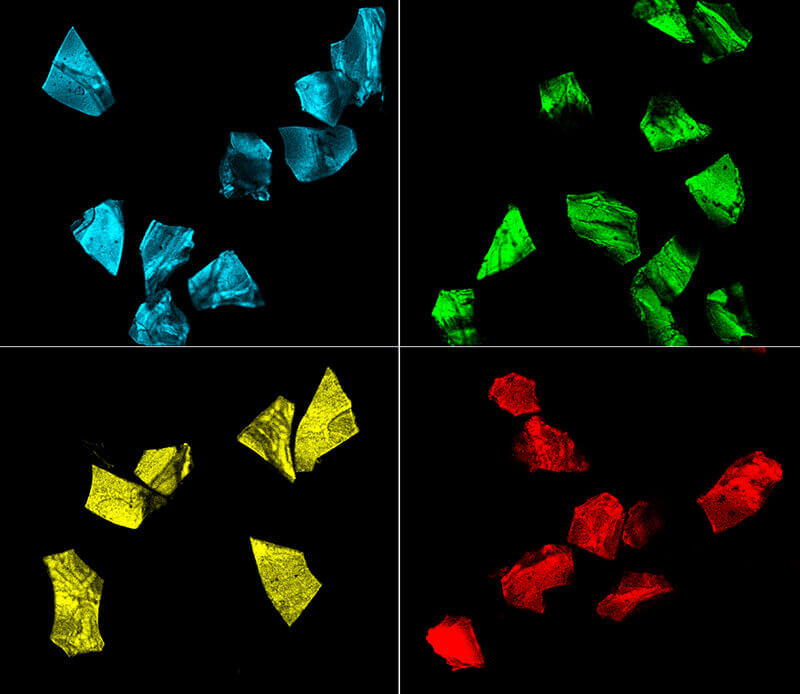 These fluorescent silk microparticles arrange into patterns that would be extremely difficult for drug counterfeiters to duplicate. The patterns act as a fingerprint that pharmacies and consumers could use to verify that a drug is authentic. (Purdue University photo/Jung Woo Leem) Download image

The tag acts as a digital fingerprint for each drug capsule or tablet, using an authentication technique called “physical unclonable functions,” or PUF, that was originally developed for information and hardware security.

PUFs have the ability to generate a different response each time that they are stimulated, rendering them unpredictable and extremely difficult to duplicate. Even the manufacturer wouldn’t be able to re-create an identical PUF tag.

Kim’s group is the first to create an edible PUF – a thin, transparent film made of silk proteins and fluorescent proteins genetically fused together. Because the tag is easily digestible and made entirely of proteins, it can be consumed as part of a pill or tablet.

Digital bits can then be extracted from an image of those patterns to produce a security key, which a pharmacy or patient would use to confirm that a drug is authentic.

The researchers are currently converting this process to a smartphone app for both pharmacies and consumers.

“Our concept is to use a smartphone to shine an LED light on the tag and take a picture of it. The app then identifies if the medicine is genuine or fake,” said Jung Woo Leem, a postdoctoral associate in biomedical engineering at Purdue.

The tag also has the potential to hold much more information than simply a confirmation of what the drug is, Leem said, such as the dose and expiration date.

Leem found that the tag works for at least a two-month period without the proteins degrading. Next, the team will need to confirm that the tag could last as long as a drug does and that it doesn’t affect a medicine’s key ingredients or potency.

Two patent applications have been filed for this technology through the Purdue Research Foundation Office of Technology Commercialization. CryptoMED LLC, a new company founded by Young Kim, will continue to develop the mobile technology and is looking for partners to scale up. The work was supported by the U.S. Air Force Office of Scientific Research (FA2386-17-1-4072).

Note to Journalists: The paper is online open-access at https://www.nature.com/articles/s41467-019-14066-5. A YouTube video is available at https://youtu.be/0bN1qODhRPU and other multimedia can be found in a Google Drive folder at http://bit.ly/silk-tag-media. The materials were prepared by Erin Easterling, digital producer for the Purdue College of Engineering.

Counterfeit medicines are a fundamental security problem. Counterfeiting medication poses a tremendous threat to patient safety, public health, and the economy in developed and less developed countries. Current solutions are often vulnerable due to the limited security levels. We propose that the highest protection against counterfeit medicines would be a combination of a physically unclonable function (PUF) with on-dose authentication. A PUF can provide a digital fingerprint with multiple pairs of input challenges and output responses. On-dose authentication can verify every individual pill without removing the identification tag. Here we report on-dose PUFs that can be directly attached onto the surface of medicines, be swallowed, and digested. Fluorescent proteins and silk proteins serve as edible photonic biomaterials and the photoluminescent properties provide parametric support of challenge-response pairs. Such edible cryptographic primitives can play an important role in pharmaceutical anti-counterfeiting and other security applications requiring immediate destruction or vanishing features.