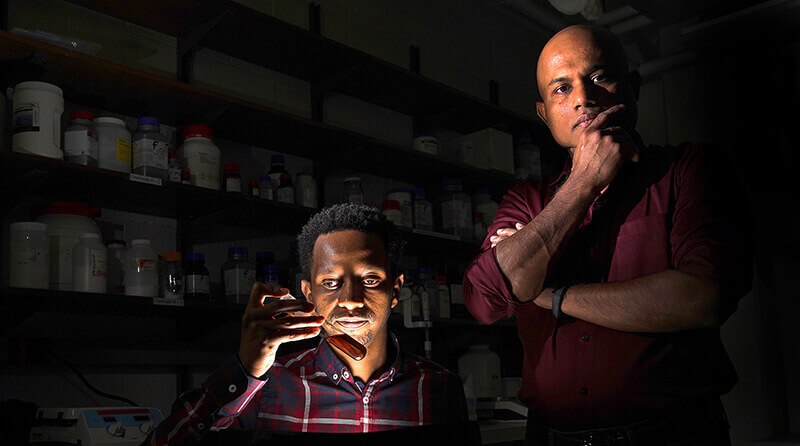 WEST LAFAYETTE, Ind. – A delicate balance of electrons flowing through the photosynthetic machinery is essential to a plant’s ability to turn sunlight into energy and its survival. Understanding the factors that regulate this balance is key for plant breeders who may want to improve light energy conversion in crop plants for increased yield.

Scientists know that a particular protein is responsible for regulating gene expression of photosystems in response to perturbations in photosynthetic electron flow, but how it senses the electrons has been an unresolved question. Purdue University scientists Sujith Puthiyaveetil and Iskander Ibrahim believe they have the answer.

Ibrahim, a postdoctoral researcher in the Puthiyaveetil laboratory, and Puthiyaveetil, an assistant professor of biochemistry and a member of Purdue’s Center for Plant Biology, with colleagues William A. Cramer, Purdue’s Henry Koffler Distinguished Professor of Biological Sciences, Yulia Pushkar, a professor of physics and astronomy, and W. Andy Tao, a professor of biochemistry, have shown that the chloroplast sensor kinase (CSK) protein is equipped with an evolutionarily conserved iron-sulfur cluster. The cluster helps it to sense the presence of electrons and thereby send signals to the gene expression machinery in plant chloroplasts to turn photosystem genes on and off.

“CSK is an ancient protein found in both cyanobacteria and chloroplasts. More than a billion years ago a cyanobacterium took up residence inside a eukaryotic host cell and became the chloroplast of plants and algae,” Puthiyaveetil said. “By examining the cyanobacterial, plant and diatom CSK proteins, we’ve discovered that CSK uses an iron-sulfur cluster to sense the electron transport, assessing how well the electrons are flowing, and make adjustments in the relative abundance of plant photosystems to keep photosynthesis working correctly and protect the plant from oxidative stress.”

The scientists were tipped off to the potential of the metallic cluster by CSK’s brownish color.

“When we stumbled upon the brown color, we knew we were a step closer to deciphering the molecular language that CSK uses to talk to the photosynthetic electron transport chain,” said Ibrahim, lead author of the findings published in the journal Communications Biology. “The brown hue of the CSK protein originates from its iron-sulfur cluster. Iron-sulfur clusters are known to play important roles in conducting the electron transport reactions of life.”

“The two photosystems are like two photovoltaic cells connected in series,” Puthiyaveetil said. “They should convert light energy at equal rates for optimal electron transport. If the electron transport is not balanced, you get free radicals that can damage the plant’s photosynthetic machinery and hurt or kill the plant.”

Purdue scientists determined that CSK’s iron-sulfur cluster acts as a sort of magnet for those extra electrons. When the plastoquinone pool becomes reduced, meaning it has excess electrons, those electrons leak into CSK and turn off its kinase activity.

The CSK is redox-reactive, meaning it’s using the iron and sulfur to sense the electron flow, and that’s keeping the two photosystems working at the same rate in photosynthesis.

The findings illuminate an elegant regulatory mechanism in the photosynthetic processes of plants. It’s possible, Puthiyaveetil said, that one day this regulatory circuit could be modified to increase photosynthetic efficiency in crop plants by improving light capture in shaded conditions.

The U.S. Department of Energy, the National Science Foundation, and the Showalter Trust supported the research.

Photosynthetic efficiency depends on equal light energy conversion by two spectrally distinct, serially-connected photosystems. The redox state of the plastoquinone pool, located between the two photosystems, is a key regulatory signal that initiates acclimatory changes in the relative abundance of photosystems. The Chloroplast Sensor Kinase (CSK) links the plastoquinone redox signal with photosystem gene expression but the mechanism by which it monitors the plastoquinone redox state is unclear. Here we show that the purified Arabidopsis and Phaeodactylum CSK and the cyanobacterial CSK homologue, Histidine kinase 2 (Hik2), are iron-sulfur proteins. The Fe-S cluster of CSK is further revealed to be a high potential redox-responsive [3Fe-4S] center. CSK responds to redox agents with reduced plastoquinone suppressing its autokinase activity. Redox changes within the CSK iron-sulfur cluster translate into conformational changes in the protein fold. These results provide key insights into redox signal perception and propagation by the CSK-based chloroplast two-component system.