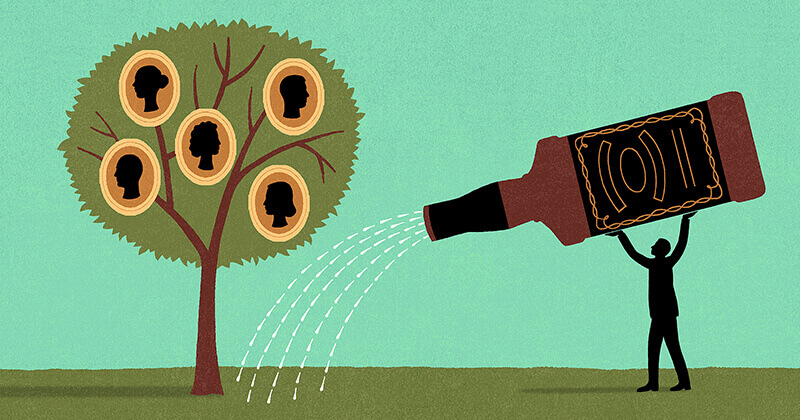 A family history of alcoholism affects a process that the brain uses when transitioning from a mentally demanding state to a resting state, researchers have found. (Illustration by James Steinberg)

WEST LAFAYETTE, Ind. — You don’t have to be a drinker for your brain to be affected by alcoholism.

A new study shows that just having a parent with an alcohol use disorder affects how your brain transitions between active and resting states – regardless of your own drinking habits.

The study, performed by researchers at Purdue University and the Indiana University School of Medicine, discovered that the brain reconfigures itself between completing a mentally demanding task and resting.

But for the brain of someone with a family history of an alcohol use disorder, this reconfiguration doesn’t happen.

While the missing transition doesn’t seem to affect how well a person performs the mentally demanding task itself, it might be related to larger scale brain functions that give rise to behaviors associated with addiction. In particular, study subjects without this brain process demonstrated greater impatience in waiting for rewards, a behavior associated with addiction.

Multiple regions of the brain are involved in a “reconfiguration” that happens between completing a difficult task and resting. But for people with a family history of alcoholism, this reconfiguration is diminished. (Purdue University image) Download image

Findings are published in the journal NeuroImage. The work was led by Enrico Amico, a former Purdue postdoctoral researcher who is now a researcher at EPFL in Lausanne, Switzerland.

How the brain reconfigures between active and resting states is like how a computer closes down a program after you’re finished with it.

“The moment you close a program, a computer has to remove it from memory, reorganize the cache and maybe clear out some temporary files. This helps the computer to prepare for the next task,” said Joaquín Goñi, a Purdue assistant professor in the School of Industrial Engineering and the Weldon School of Biomedical Engineering.

“In a similar way, we’ve found that this reconfiguration process in the human brain is associated with finishing a task and getting ready for what’s next.” Goñi’s research group, the CONNplexity Lab, takes a computational approach to neuroscience and cognitive science.

Past research has shown that a family history of alcoholism affects a person’s brain anatomy and physiology, but most studies have looked at this effect only in separate active and quiet resting states rather than the transition between them.

“A lot of what brains do is switch between different tasks and states. We suspected that this task switching might be somewhat lower in people with a family history of alcoholism,” said David Kareken, a professor of neurology at the Indiana University School of Medicine and director of the Indiana Alcohol Research Center.

The study defined a “family history of alcoholism” as someone with a parent who had enough symptoms to constitute an alcohol use disorder. About half of the 54 study participants had this history.

Researchers at Indiana University measured the brain activity of subjects with an MRI scanner as they completed a mentally demanding task on a computer. The task required them to unpredictably hold back from pressing a left or right key. After completing the task, the subjects rested while watching a fixed point on the screen.

A separate task outside of the MRI scanner gauged how participants responded to rewards, asking questions such as if they would like $20 now or $200 in one year.

Amico and Goñi processed the data and developed a computational framework for extracting different patterns of brain connectivity between completing the mentally demanding task and entering the resting state, such as when brain areas rose and fell together in activity, or one brain area rose while another fell at the same time.

The data revealed that these brain connectivity patterns reconfigured within the first three minutes after finishing the task. By the fourth minute of rest, the effect had completely disappeared.

And it’s not a quiet process: Reconfiguration involves multiple parts of the brain at once.

“These brain regions talk to each other and are very strongly implicated in the task even though by this point, the task is already completed. It almost seems like an echo in time of what had been going on,” Kareken said.

Subjects lacking the transition also had the risk factors that researchers have seen to be consistent with developing alcoholism. These include being male, a greater number of symptoms of depression, and reward-impatience.

A family history of alcoholism, however, stood out as the most statistically significant difference in this brain reconfiguration.

“In the past, we’ve assumed that a person who doesn’t drink excessively is a ‘healthy’ control for a study. But this work shows that a person with just a family history of alcoholism may also have some subtle differences in how their brains operate,” Goñi said.

The code used to analyze data in this study is available at https://engineering.purdue.edu/ConnplexityLab/publications.

Note to Journalists: The paper is available online open-access at https://www.sciencedirect.com/science/article/pii/S1053811920300021. An illustration and brain images are available via a Google Drive folder at https://bit.ly/2UE8aSL

Human functional brain connectivity is usually measured either at “rest” or during cognitive tasks, ignoring life’s moments of mental transition. We propose a different approach to understanding brain network transitions. We applied a novel independent component analysis of functional connectivity during motor inhibition (stop signal task) and during the continuous transition to an immediately ensuing rest. A functional network reconfiguration process emerged that: (i) was most prominent in those without familial alcoholism risk, (ii) encompassed brain areas engaged by the task, yet (iii) appeared only transiently after task cessation. The pattern was not present in a pre-task rest scan or in the remaining minutes of post-task rest. Finally, this transient network reconfiguration related to a key behavioral trait of addiction risk: reward delay discounting. These novel findings illustrate how dynamic brain functional reconfiguration during normally unstudied periods of cognitive transition might reflect addiction vulnerability, and potentially other forms of brain dysfunction.