Approved by the Purdue Board of Trustees in December, the $20 million, 37,500-square-foot, four-story facility will be built at the southeast corner of Third and Russell streets. It will be along Third Street’s Student Success Corridor, which connects student residential areas with the campus’s academic center.

With an additional $10 million fundraising campaign from private donors now underway, construction on Hagle Hall is expected to start in September and finish by December 2021. Purdue Bands & Orchestras anticipates having occupancy as early as March 2022. 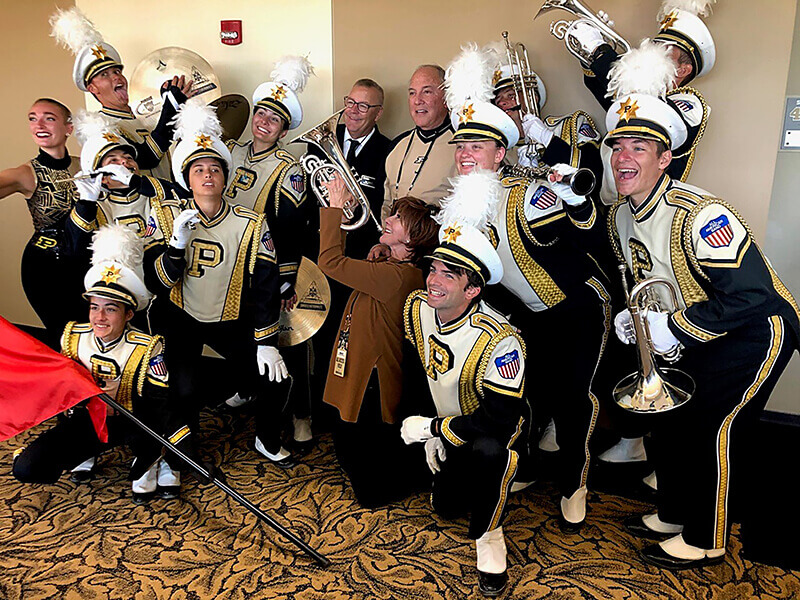 Purdue President Mitch Daniels announced the Hagles’ gift on Saturday (Feb. 15) at the President’s Council Naples (Florida) Annual Dinner. He presented the couple, residents of Winter Park, Florida, with the Purdue crystal train — a Boilermaker Special replica — in recognition of their gift.

“Announcing the new Marc and Sharon Hagle Hall — and the leadership gift that makes it possible — is music to the ears of the more than 15,000 Bands & Orchestras alumni around the world, just as it is to all of us who have had our spirits raised and our hearts touched by the remarkable student performers in Purdue Bands & Orchestras over the years,” Daniels said. “Thanks to Marc and Sharon’s exceptional generosity in launching this project, we will have a teaching and learning showcase for this world-class program.”

Hagle Hall will provide dedicated space for the 133-year-old Bands & Orchestras program, which has operated in Elliott Hall since that facility’s completion in 1940.

The alumnus champion of the project, Marc Hagle graduated from Purdue with a bachelor’s degree in electrical engineering in 1971 and a master’s in business and industrial administration in 1972. As a student, he performed in the Purdue “All-American” Marching Band drum line, including during Purdue’s 14-13 victory at the 1967 Rose Bowl, and participated in the symphonic band.

Marc is president and CEO of Tricor International, and he serves as president and managing director of Virgin Fest, a licensee of the Virgin brand to operate music festivals throughout North America and the Caribbean.

Sharon, an alumna of Morris Harvey College, has been a real estate entrepreneur since 1983 and is active in the couple’s charitable and philanthropic work. She is the founder of SpacekidsGlobal, an organization that seeks to inspire 1 million elementary school students about space travel and STEM education, with a focus on empowering young girls. STEM stands for science, technology, engineering and mathematics.

In 2015, the Hagles contributed to the Roy and Sarah Johnson Purdue Bands & Orchestras Endowment Scholarship Program to honor Roy Johnson’s 60 years of service to Purdue’s instrumental music programs and his role as the “Voice” of the “All-American” Marching Band.

On a visit to Purdue several years ago, Marc reconnected with Roy Johnson, and on a more recent trip, he toured Elliott Hall, stopping by the antiquated rooms 15 and 30 rehearsal areas — visits that prompted the Hagles’ interest in supporting a facility commensurate with the Bands & Orchestras’ high caliber and international acclaim.

“The department has outgrown its space two times over, and when we were presented with the proposal to help, we bought into it instantly,” Marc said. “Everybody who participates in Bands & Orchestras has an opportunity that will affect them for the rest of their lives, as it did mine. It is a terrific character-building experience, and the dedication you put into it pays you back in personal reward many times over.”

“We are excited about the opportunity to make a difference,” Sharon added. 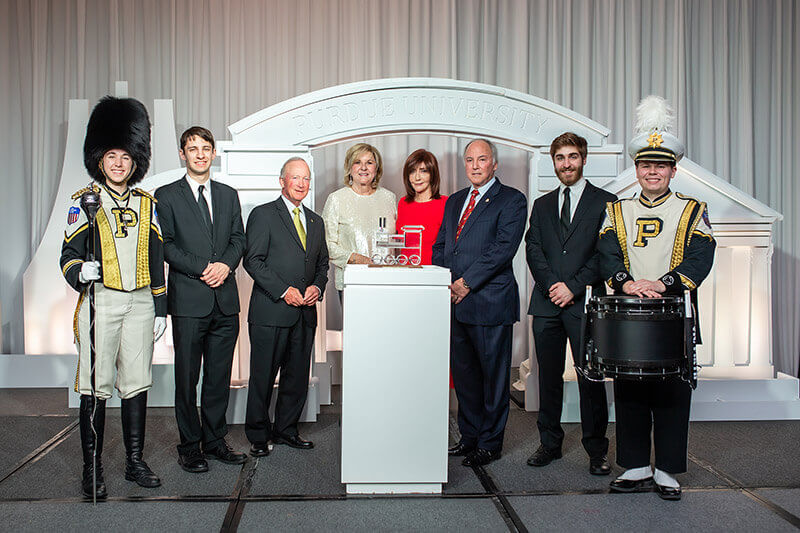 Marc credits Jay Gephart, the Al G. Wright Chair, director of bands and professor of music, for elevating the national and international reputation of the “All-American” Marching Band since being appointed its director in 2006. In 2010, the band became the first from the Big Ten to lead the Macy’s Thanksgiving Day Parade. During his tenure, Gephart has led the band in numerous international performances, including concerts in China, Ireland and Colombia.

“There has been talk about a new facility since I came to Purdue in 1995,” Gephart said. “It took Marc and Sharon’s personal involvement, generosity and drive to put our dream on the fast track. This building is the game changer we’ve needed to take our ‘Giant Leap’ forward as a program. That’s how important Marc and Sharon’s lead gift is. This facility will transform the way our students learn and how this department operates.”

Since fall 2013, the university — which has no music school — has seen a 65% growth in participation in Bands & Orchestras and now counts more than 1,120 students in more than 30 ensembles, concert bands and jazz bands, as well as the marching band. These students, more than 70% of whom are in STEM disciplines, boast an average GPA of 3.28, which is higher than the Purdue average. A YouTube video is available here.

Gephart noted that the new building’s location will bring greater visibility to the program as part of the academic environment. Students and passersby will be able to see rehearsals from Third Street, along a portion of the street that will become a pedestrian thoroughfare by the beginning of the 2020-21 academic year.

Other features of the building:

“We are excited about the future and for what this new facility will mean for all of our students,” Gephart said. “What we have done and will do, as alumni and friends working together, will be remarkable.”