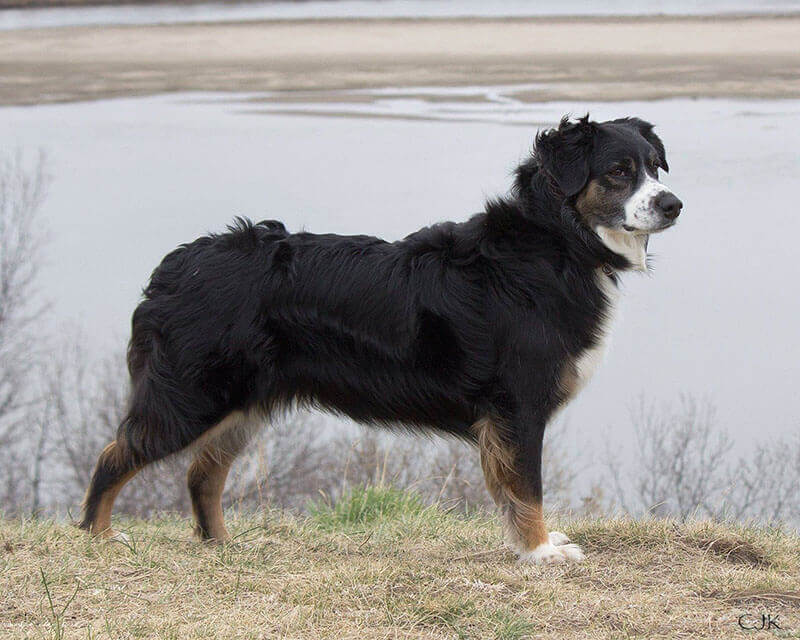 New research from Purdue University’s College of Veterinary Medicine shows that some breeds of dogs have hidden coat colors – and in some cases, other traits – that have been lurking all along. Example: There are around 18 recognized breeds of dogs that have the genetic potential to be born without a tail – such as the popular Australian Shepherd (shown in photo). But the data shows that up to 48 of the breeds analyzed possess the tailless gene variant, usually at a very low frequency. (Photo provided)

WEST LAFAYETTE, Ind. — If you have a purebred dog, it’s likely that he or she looks fairly similar to other dogs of the same breed, especially when it comes to the color of their coats.

But what happens if a purebred puppy doesn’t look exactly like its siblings when it’s born? Chances are, it might not be a flaw – but rather a hidden gene variant that decided to show itself.

New research from Purdue University’s College of Veterinary Medicine shows that some breeds of dogs have hidden coat colors – and in some cases, other traits – that have been lurking all along.

Led by Kari Ekenstedt, DVM, Ph.D., assistant professor of anatomy and genetics, and Dayna Dreger, Ph.D., the lead scientist in Ekenstedt’s canine genetics research laboratory, the team looked at a dozen different genes in 212 dog breeds. Purdue researchers, together with industry partners at Wisdom Health, analyzed data that had been initially collected by WISDOM PANEL™ for the development of canine DNA tests. The work was published Oct. 28 in PLOS ONE.

“These are purebred dogs with traits that their breed clubs say they’re not supposed to have,” said Ekenstedt, whose research program focuses on canine genetics. “The message of this paper is, ‘Hey, these gene variants exist in your breed, and if a few dogs are born with these traits, it’s not caused by accidental breeding and it’s not a mutt; it’s a purebred showing this known genetic potential.’”

Along with analyzing the data, researchers used standard breed descriptions from major American and international dog breed registries to determine coat colors and tail lengths that were accepted within each breed.

“There was a lot of information we didn’t expect,” Dreger said. “When it comes to different dog breeds, their standards are mostly based on preference and aesthetics. We make assumptions for certain breeds based on what we expect their coat colors to be.”

Ekenstedt says coat color genes have a significant amount of epistasis between them, meaning that what happens at one gene can mask what’s happening at another gene. Because of epistasis, it’s rare to see those masked genes actually expressed in a dog’s coat color.

One example of a “fault” allele – a gene variant that would cause a trait that is not allowed in a breed standard – is an allele that causes the brown color, which affects both hair pigment and skin pigment. The color is allowed in breeds like the Labrador Retriever where it causes the chocolate color. However, researchers observed that in breeds where brown is not allowed, such as the Rottweiler and the German Shepherd Dog, brown alleles exist at low frequencies.

The same goes for other traits, too, Dreger said. For example, there are around 18 recognized breeds of dogs that have the genetic potential to be born without a tail – such as the popular Australian Shepherd. But the data shows that up to 48 of the breeds analyzed possess the tailless gene variant, usually at a very low frequency; one of those breeds is the Dachshund.

“A breeder would certainly be surprised to see a Dachshund born without a tail,” Dreger said. “The chances are low, but our research shows that the potential is there.”

Both Dreger and Ekenstedt hope the research prompts some discussions within the dog community.

“I want this to start science-based conversations,” Dreger said. “We’re not here to make decisions on what a breed should or shouldn’t look like or what a breed club should do. We’re here to say these are the facts, and these are the gene variants that naturally exist in these breeds.”

They also hope it changes some perspectives when it comes to what is to be expected with certain breeds of dogs.

“There’s an assumption that the standards for these different breeds of dogs are set in stone,” Dreger said. “People will often make assumptions that if it doesn’t match this, it’s not purebred. This data shows that there is a lot of variation in some of these breeds, and the standards are not as concrete as we expect them to be.”

Wisdom Health funded a Veterinary Summer Scholar position to Blair Hooser, a student at the Purdue College of Veterinary Medicine and coauthor on the paper, for this work. Partial support for Dr. Ekenstedt was provided by the National Institutes of Health.

Note to journalists: For a copy of the paper, contact Abbey Nickel, Purdue University News Service, at nickela@purdue.edu.

Direct-to-consumer canine genetic testing is becoming increasingly popular among dog owners. The data collected therein provides intriguing insight into the current status of morphological variation present within purebred populations. Mars WISDOM PANELTM data from 11,790 anonymized dogs, representing 212 breeds and 4 wild canine species, were evaluated at genes associated with 7 coat color traits and 5 physical characteristics. Frequencies for all tested alleles at these 12 genes were determined by breed and by phylogenetic grouping. A sub-set of the data, consisting of 30 breeds, was divided into separate same-breed populations based on country of collection, body size, coat variation, or lineages selected for working or conformation traits. Significantly different (p ≤ 0.00167) allele frequencies were observed between populations for at least one of the tested genes in 26 of the 30 breeds. Next, standard breed descriptions from major American and international registries were used to determine colors and tail lengths (e.g. genetic bobtail) accepted within each breed. Alleles capable of producing traits incongruous with breed descriptions were observed in 143 breeds, such that random mating within breeds has probabilities of between 4.9e-7 and 0.25 of creating undesirable phenotypes. Finally, the presence of rare alleles within breeds, such as those for the recessive black coloration and natural bobtail, was combined with previously published identity-by-decent haplotype sharing levels to propose pathways by which the alleles may have spread throughout dog breeds. Taken together, this work demonstrates that: 1) the occurrence of low frequency alleles within breeds can reveal the influence of regional or functional selection practices; 2) it is possible to visualize the potential historic connections between breeds that share rare alleles; and 3) the necessity of addressing conflicting ideals in breed descriptions relative to actual genetic potential is crucial.