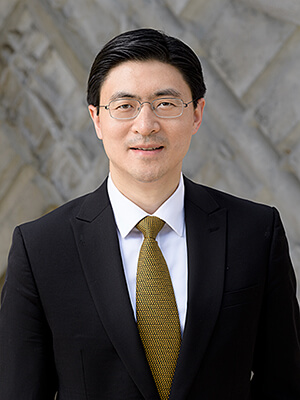 Purdue University announced Monday (Dec. 9) that President Mitch Daniels has approved a one-year leave of absence for its engineering dean to provide vital expertise to the U.S. Department of State on the economic security of the nation’s global technology initiatives, such as artificial intelligence, 5G wireless networks, energy infrastructure, cybersecurity for autonomous systems, and trusted microelectronic chips.

Mung Chiang, Purdue’s John A. Edwardson Dean of Engineering and the Roscoe H. George Distinguished Professor of Electrical and Computer Engineering, will spend a year in Washington, D.C., beginning Dec. 15, 2019, to serve as the science and technology adviser to the secretary of state.

“We can’t help but be extremely proud that our nation has called upon our own Dean Chiang for this position of such high importance for national security,” Purdue President Mitch Daniels said. “He is one of the world’s leading experts in this subject matter, having won the prestigious Alan T. Waterman Award for his research, and we know his background and expertise are sorely needed.

“There is no denying, however, that this will pose serious challenges here in West Lafayette. We have seen great strides for our College of Engineering under Mung’s leadership, and we do not want to see any slowing of the rate of progress.”

Daniels said an acting dean will be appointed within a few days. Chiang will continue to be actively engaged in the initiatives of the Purdue College of Engineering and will visit campus regularly with a target of at least twice a month.

Under Chiang’s leadership, Purdue’s College of Engineering has seen a 52% jump in research awards to $221 million per year, 40% more annual patent applications to over 400 per year, and the winning of six major national research centers from five different federal agencies. It has cemented partnerships with multiple local and global entities, including the Indy 5G Zone and the Saab and Schweitzer Engineering Laboratories sites in West Lafayette, and launched five interdisciplinary Purdue Engineering Initiatives. The recent incoming classes of undergraduates were the largest, most academically prepared and most diverse in the college’s history, with schools initiating “agile curriculum reform.” Expanded and new facilities have been approved, including the $140 million Engineering and Polytechnic Gateway complex. Online affordable master’s degrees have been created, and fundraising during the Ever True campaign exceeded the college’s goal by 47%. 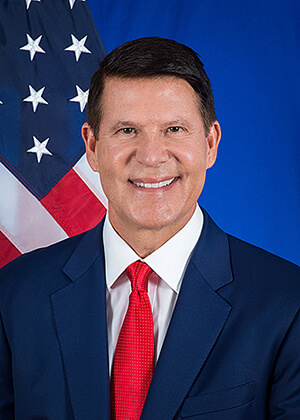 Keith Krach
Download image
While on assignment in the Department of State, Chiang will be the director of the Office of the Science and Technology Adviser to the Secretary of State (STAS), created in 2000 in response to a study by the National Academy of Sciences. Part of this office’s focus is on the impact of emerging science, technology, and innovation issues on foreign policy and national security, including interactions with technology companies in key global supply chains. As the principal scientist in the State Department, Chiang will be the sixth holder of the office and the first engineer. He will report to Keith Krach, former chairman of Purdue University’s Board of Trustees and currently the undersecretary of state for economic growth, energy and the environment.

“The intersection between foreign policy and the advances in science, engineering and health is going through a critical time. I am deeply honored to be part of an incredible team led by Keith Krach in the State Department to serve our country, especially in global economic security for the U.S.,” Chiang said. “I am also very grateful to Purdue President Mitch Daniels and Provost Jay Akridge for their support of this service to the nation as a form of engagement, one of the three missions of this remarkable land-grant university and inspiringly exemplified by President Daniels himself.

“I have the highest confidence in the leadership team of our College of Engineering, and I know the amazing faculty, students, staff and alumni will continue to propel Purdue Engineering to the pinnacle of excellence at scale. We will make sure the pace and impact will be maximized in 2020. I will be back home in Indiana every weekend, and I look forward to returning as Purdue’s dean of engineering in one year’s time.”

Chiang’s appointment follows the Intergovernmental Personnel Act (IPA), which allows for the exchange of skilled personnel between government and non-government institutions.