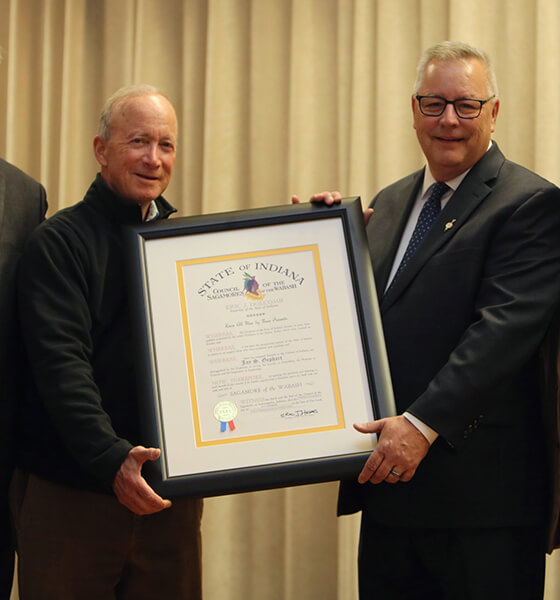 WEST LAFAYETTE, Ind. —Jay Gephart, director of Purdue University Bands & Orchestras, has been awarded the Sagamore of the Wabash, one of the state of Indiana’s highest honors.

Gephart is the Al G. Wright Chair of Purdue Bands & Orchestras. He has been at Purdue since 1995 and, in 2006, became director of Purdue Bands. Under his direction the Purdue “All-American” Marching Band has traveled around the world and performed in such places or venues as Beijing; the Macy’s Thanksgiving Day Parade in New York City; the St. Patrick’s Day Parade in Dublin, Ireland; and La Feria de las Flores in Medellin, Colombia. The band also has continued the tradition of playing to a worldwide audience before the start of the Indianapolis 500 each May.

The Sagamore of the Wabash award was created during the term of Gov. Ralph Gates, who served from 1945-49. The term “sagamore” was used by the tribes of the northeastern United States to describe a lesser chief or a great man among the tribe to whom the true chief would look for wisdom and advice. It is a personal tribute usually given to those who have rendered a distinguished service to the state or to the governor. Among those who have received Sagamores have been astronauts, presidents, ambassadors, artists, musicians, politicians and ordinary citizens who have contributed greatly to the Hoosier heritage.

Also during the banquet, Sheila Klinker, state representative and Purdue alumna, presented Gephart with a golden seal of the state of Indiana celebrating his 25 years as a faculty member with Purdue Bands & Orchestras.