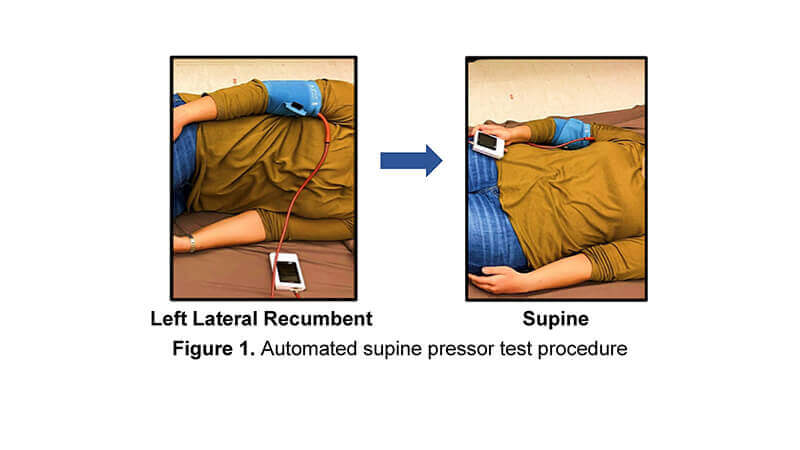 Automated supine pressor test procedure. Researchers are developing a way for women to test themselves for preeclampsia risk at home using a smartphone and automated blood pressure cuff. (Photo provided by study authors)


WEST LAFAYETTE, Ind. — Roughly 15% of premature births in the U.S. happen due to a pregnancy complication caused by high blood pressure, called preeclampsia. While sometimes symptoms dissipate after the mother gives birth, preeclampsia can lead to permanent damage to the kidneys or death.

Purdue University researchers and colleagues, including Drs. David Reuter from Seattle Children’s Hospital and David Haas from Indiana University School of Medicine, have been developing technology that would help a patient assess her risk for developing preeclampsia using a smartphone and an ambulatory blood pressure cuff. The device will automatically detect changes in her blood pressure indicative of preeclampsia as she switches between lying on her back and left side.

In a pilot study of 25 women at least 20 weeks pregnant, the majority of participants found the procedure easy to follow and the cuff comfortable to use, demonstrating the feasibility of making the device an autonomous self-test. Another key finding from this work was that when women rested on their side, their blood pressure was significantly lower.

The study was recently published in the Journal of Engineering and Science in Medical Diagnostics and Therapy. The researchers are aiming to advance the prototype to an autonomous device in the coming year.

“The goal is to not only identify patients with preeclampsia, but to also inform the patient that she is at higher risk for developing this condition in a week or a month from now,” said Craig Goergen, the Leslie A. Geddes Associate Professor of Biomedical Engineering at Purdue.

The technology is an automated version of a simple test developed in the 1970s that measures changes in a woman’s blood pressure in different positions. Called the supine pressor test, the method was accurate but fell out of use because of inconsistencies in the testing procedure leading to incorrect measurements.

“When this test was used in clinics, everybody was doing it slightly differently. What does ‘left side’ mean? How long does it take? It was not working well and was basically neglected,” Goergen said.

“But if we could automate this test to indicate to the patient when her BP has stabilized, for example, then this test could be performed by the patient herself at home.”

The researchers asked participants to take their blood pressure lying on their side and then on their back. A smartphone app helped the participants know that they were positioned in the correct position each time. The study also observed how 50 non-pregnant women used the device as a baseline.

Especially for parts of the world with high preeclampsia rates but poor access to a clinic, the researchers believe that such a device could reduce mortality rates.

“This device has a lot of potential to help pregnant women in many different settings, particularly rural and underdeveloped ones,” said Hamna Qureshi, a former Purdue master’s student in biomedical engineering and first author on this paper.

The technology is protected by a provisional patent. The work is financially supported by the Bill & Melinda Gates Foundation, the Women’s Global Health Institute (WGHI) and the Indiana Clinical and Translational Sciences Institute. WGHI is affiliated with the Purdue Institute of Inflammation, Immunology and Infectious Disease, located in Purdue University’s Discovery Park.

Towards Automation of the Supine Pressor Test for Preeclampsia

Preeclampsia leads to increased risk of morbidity and mortality for both mother and fetus. Most previous studies have largely neglected mechanical compression of the left renal vein by the gravid uterus as a potential mechanism. In this study we first used a murine model to investigate the pathophysiology of left renal vein constriction. The results indicate that prolonged renal vein stenosis after 14 days can cause renal necrosis and an increase in blood pressure (BP) of roughly 30 mmHg. The second part of this study aimed to automate a diagnostic tool, known as the supine pressor test (SPT), to enable pregnant women to assess their preeclampsia development risk. A positive SPT has been previously defined as an increase of at least 20 mmHg in diastolic BP when switching between left lateral recumbent and supine positions. The results from this study established a baseline BP increase between the two body positions in non-pregnant women and demonstrated the feasibility of an autonomous SPT in pregnant women. Our results demonstrate that there is a baseline increase in BP of roughly 10-14 mmHg and that pregnant women can autonomously perform the SPT. Overall, this work in both rodents and humans suggests that 1) stenosis of the left renal vein in mice leads to elevation in BP and acute renal failure, 2) non-pregnant women experience a baseline increase in BP when they shift from left lateral recumbent to supine position, and 3) the SPT can be automated and used autonomously.