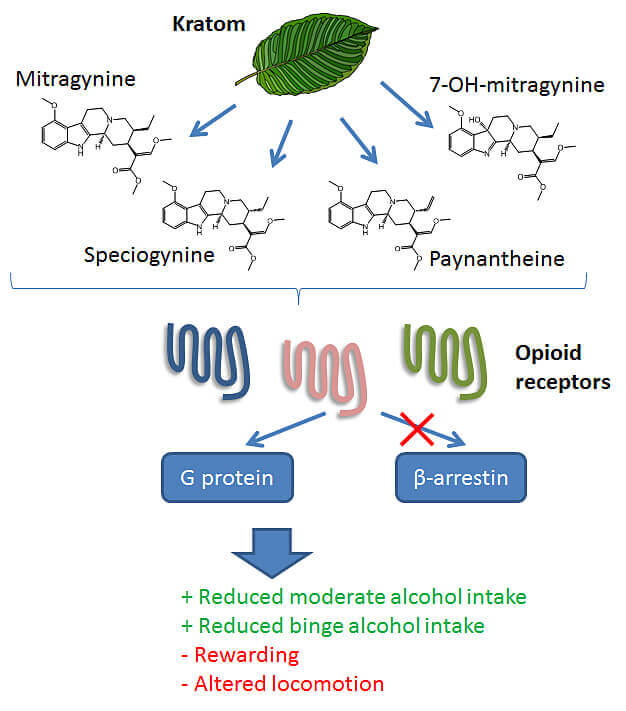 A Purdue University-led team recently published a paper examining the effects of kratom and the potential impacts on people with alcohol use disorder. (Image provided) Download image

Scientists take closer look at use of ‘drug of concern’ kratom

WEST LAFAYETTE, Ind. – Lawmakers across the United States continue to debate the safety of kratom, an opioid-containing plant that has been listed as a “drug of concern” by the U.S. Food and Drug Administration. Kratom is sold over the counter in specialty stores and online.

Substance use disorders are a major health concern in the U.S. and a growing number of people suffering from these diseases are self-medicating with kratom to help break a cycle of dependence. After tobacco, the most commonly abused substance in the U.S. is alcohol with nearly 15 million people diagnosed with an alcohol use disorder.

A Purdue University-led team published a paper in the Nov. 8 edition of the British Journal of Pharmacology examining the effects of kratom and the potential impacts on people with alcohol use disorder. The cost to individuals and society from alcohol use is estimated at more than $250 billion each year.

“One big challenge is that alcohol use disorder is not adequately treated with currently available medications; in fact less than 10% of patients receive treatment,” said Richard van Rijn, an associate professor in Purdue’s College of Pharmacy, who led the research team. “Few broadly effective drug therapies exist to treat alcohol use disorder, so finding new and better treatments is of critical importance to help people manage their disease.”

The Purdue scientists, in collaboration with researchers at Memorial Sloan-Kettering in New York City and Washington University in St. Louis, studied the potential effects of kratom and its components on the body and in the ability to reduce alcohol consumption.

“Our work shows that kratom may be effective to self-medicate alcohol use disorder but is not entirely safe,” van Rijn said. “Instead, our research provides additional support for other therapies that would not produce the obvious side effects of using kratom, which may be addictive.”

The Purdue team previously focused on a G protein-coupled receptor, called the delta opioid receptor, which is a novel drug target that is different from the receptor in the body that binds prescription opioids. They developed drugs that bind to this new target and selectively activate a particular protein signaling cascade of this receptor.

Researchers worked with the Purdue Research Foundation Office of Technology Commercialization to secure a patent for the technology. It is available for licensing. Contact otcip@prf.org for information.

The Purdue Research Foundation Office of Technology Commercialization operates one of the most comprehensive technology transfer programs among leading research universities in the U.S. Services provided by this office support the economic development initiatives of Purdue University and benefit the university's academic activities through commercializing, licensing and protecting Purdue intellectual property. The office is managed by the Purdue Research Foundation, which received the 2016 Innovation and Economic Prosperity Universities Award for Innovation from the Association of Public and Land-grant Universities. For more information on licensing a Purdue innovation, contact the Purdue Office of Technology Commercialization at otcip@prf.org. The Purdue Research Foundation is a private, nonprofit foundation created to advance the mission of Purdue University.

Mitragyna speciosa, more commonly known as kratom, is a plant that contains opioidergic alkaloids, but is unregulated in most countries. Kratom is used in the self‐medication of chronic pain and to reduce illicit and prescription opioid dependence. Kratom may be less dangerous than typical opioids because of the stronger preference of kratom alkaloids to induce receptor interaction with G proteins over beta-arrestin proteins. We hypothesized that kratom (alkaloids) can also reduce alcohol intake.

We pharmacologically characterized kratom extracts, kratom alkaloids (mitragynine, 7‐hydroxymitragynine, paynantheine, and speciogynine), and synthetic carfentanil‐amide opioids for their ability to interact with G proteins and beta‐arrestin at mu, delta and kappa opioid receptors in vitro. We used C57BL/6 mice to assess to which degree these opioids could reduce alcohol intake and whether they had rewarding properties.

Our results suggest that kratom extracts can decrease alcohol intake, but still carry significant risk upon prolonged use. Development of more delta opioid-selective synthetic opioids may provide a safer option than kratom to treat alcohol use disorder with fewer side effects.