How much are you polluting your office air just by existing?

WEST LAFAYETTE, Ind. — Just by breathing or wearing deodorant, you have more influence over your office space than you might think, a growing body of evidence shows. But could these basic acts of existence also be polluting the air in the office room where you work?

To find out, a team of engineers at Purdue University has been conducting one of the largest studies of its kind in the office spaces of a building rigged with thousands of sensors. The goal is to identify all types of indoor air contaminants and recommend ways to control them through how a building is designed and operated.

“If we want to provide better air quality for office workers to improve their productivity, it is important to first understand what’s in the air and what factors influence the emissions and removal of pollutants,” said Brandon Boor, an assistant professor of civil engineering with a courtesy appointment in environmental and ecological engineering.

A study in a tightly-controlled office space at Purdue University is showing that people greatly impact the air chemistry of the rooms where they work. (Purdue University photo/Brandon Boor) Download image

The data is showing that people and ventilation systems greatly impact the chemistry of indoor air – possibly more than anything else in an office space. The researchers will present their initial findings at the 2019 American Association for Aerosol Research Conference in Portland, Oregon, Oct. 14-18.

“The chemistry of indoor air is dynamic. It changes throughout the day based on outdoor conditions, how the ventilation system operates and occupancy patterns in the office,” Boor said.

The building, called the Living Labs at Purdue’s Ray W. Herrick Laboratories, uses an array of sensors to precisely monitor four open-plan office spaces and to track the flow of indoor and outdoor air through the ventilation system. The team developed a new technique to track occupancy by embedding temperature sensors in each desk chair.

Through use of the Living Labs, Boor’s team has begun to identify previously unknown behaviors of chemicals called volatile organic compounds, such as how they are transformed in ventilation systems and removed by filters. 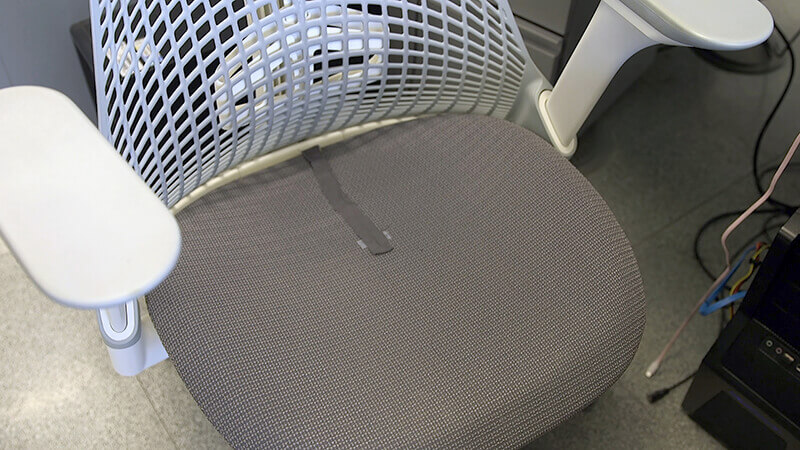 Researchers embedded temperature sensors on desk chairs to track the occupancy of an office space, finding that as the number of people increase, so do emissions of airborne chemical compounds. (Purdue University photo/Erin Easterling) Download image

“We wanted to shed light on the behind-the-scenes role ventilation systems have on the air we breathe,” Boor said.

Boor teamed up with researchers at RJ Lee Group to deploy a highly sensitive “nose” – an instrument that scientists call a proton transfer reaction time-of-flight mass spectrometer. The instrument, typically used for measuring outdoor air quality, helped “sniff” out compounds in human breath, such as isoprene, in real time. Boor’s team found that isoprene and many other volatile compounds linger in the office even after people have left the room.

A greater number of people in a room also means more emissions of these compounds. A YouTube video is available at https://youtu.be/mi1xi31QAfQ.

“Our preliminary results suggest that people are the dominant source of volatile organic compounds in a modern office environment,” Boor said. “We found levels of many compounds to be 10 to 20 times higher indoors than outdoors. If an office space is not properly ventilated, these volatile compounds may adversely affect worker health and productivity.” 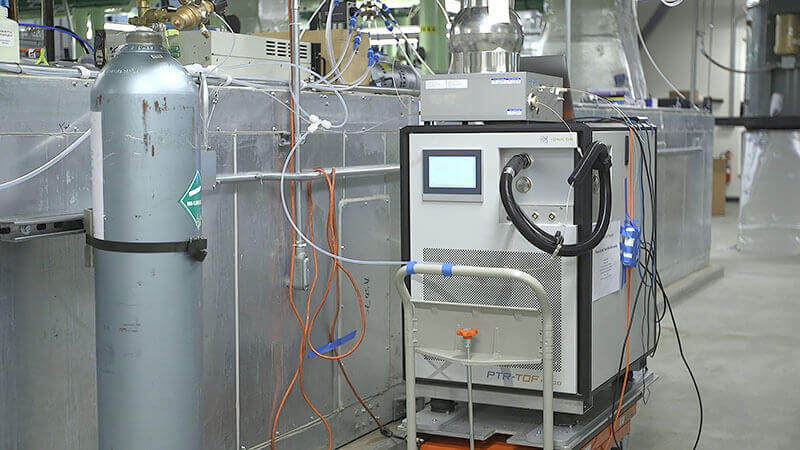 The team also revealed that a pollutant entering from outside, ozone, disappears inside. This is because ozone interacts with other indoor compounds and the vast surfaces of a furnished office. The researchers found that ozone and compounds released from peeling an orange, called monoterpenes, mix to form new, super-tiny particles as small as one-billionth of a meter. The newly formed particles could be toxic because they are small enough to get into the deepest regions of a person’s lungs.

The effects of volatile compounds released in an office might not just be restricted to indoors. The researchers believe that chemicals emitted from self-care products such as deodorant, makeup, and hair spray may elevate levels outdoors as they are vented outside by the ventilation system.

This work is funded in part by the National Science Foundation Environmental Engineering Program, the Alfred P. Sloan Foundation Chemistry of Indoor Environments Program and the Purdue Research Foundation.

The research aligns with Purdue's Giant Leaps celebration, acknowledging the university’s global advancements made in health and sustainability as part of Purdue’s 150th anniversary. These are two of the four themes of the yearlong celebration’s Ideas Festival, designed to showcase Purdue as an intellectual center solving real-world issues.

Note to Journalists: The conference abstracts are available online at http://aaarabstracts.com/2019/view_topic.php?Author=9368 and at the bottom of this release. A YouTube video is available at https://youtu.be/mi1xi31QAfQ, and other multimedia can be found in a Google Drive folder at http://bit.ly/indoor-air-media. The materials were prepared by Erin Easterling, digital producer for the Purdue College of Engineering, 765-496-3388, easterling@purdue.edu.