Back a Boiler program tops 1,000th contract for student funding 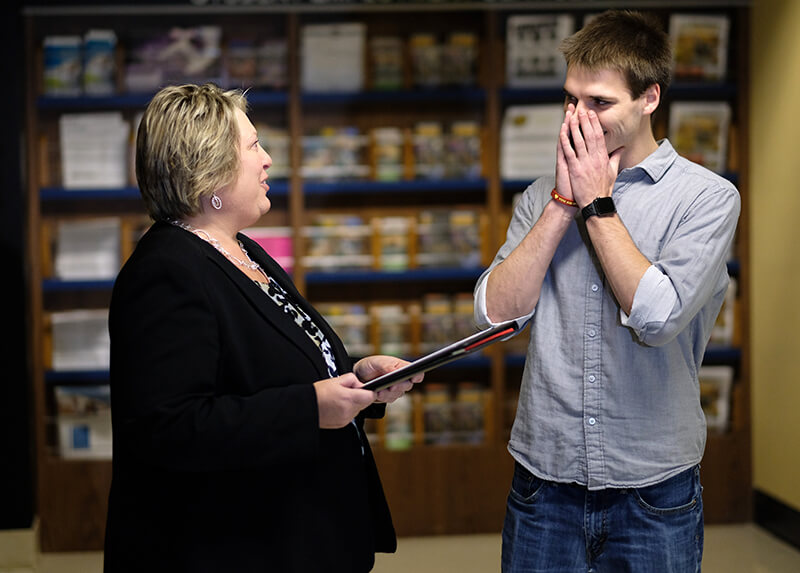 Kai Mangiaracina, at right, reacts to being told by Heidi A. Carl that his current Back a Boiler contract obligation would be cut in half to commemorate the program’s 1,000th contract. (Purdue Research Foundation photo/Oren Darling)


WEST LAFAYETTE, Ind. – When Purdue University junior Kai Mangiaracina hit the "submit" button for his application to the university's Back a Boiler – ISA Fund for the current academic year, he had no idea that his was to become the program's 1,000th contract.

He also wasn't aware that what was a milestone for the income share agreement program, which provides students an alternative to Federal Parent PLUS and private student loans, was to become a windfall for him.

On Thursday (Nov. 21) Mangiaracina learned that to commemorate the 1,000th contract, Back a Boiler will slash his current contract obligation by half — or more than $5,000. For Mangiaracina, who also received program funding last year, it was a welcome surprise.

“I’m speechless … and thankful,” said the South Lake Tahoe, California, native who is majoring in mechanical engineering technology and virtual product integration. “Back a Boiler has helped me in so many ways and is allowing me to pursue my dreams. I’m glad I found this program and proud to be a part of it.”

Mangiaracina is among hundreds of students who have benefited from Back a Boiler since the 2016-17 academic year when Purdue became the first major U.S. university to offer an income-share agreement as an alternative to federal and private student loans.

"Making a college education accessible and affordable is a driving principle at Purdue, and it's our mission to provide students with the tools to make that possible," said Heidi A. Carl, Purdue's executive director of financial aid. "Back a Boiler is an option, unique to Purdue, that we can offer students who are weighing options for financing their education in a way that is both fiscally sound and personally manageable."

Since its inception, Back a Boiler has issued just over 1,200 funding contracts to 760 unique students representing more than 150 majors at Purdue. The program has disbursed $13.9 million in funding.

This fall, the number of student Back a Boiler contracts increased by more than 25%, and 44% of participants are students, like Mangiaracina, who already have a contract with the program and have returned for additional funding.

Mary-Claire Cartwright, Back a Boiler program manager in the Purdue Research Foundation, said the continuing growth shows that the fund serves as an equity-based option for students seeking to fund their educations.

Back a Boiler was launched as part of Purdue Moves: Accessibility and Affordability, a multifaceted program created by President Mitch Daniels to make higher education more affordable and to reduce student debt. As part of Purdue Moves, tuition rates have remained frozen for seven years, and it is estimated that from fiscal years 2013-19, Purdue families have saved a total of about $465 million through the university’s deferral of tuition, fee, and room and board increases.

Back a Boiler offers students and their families an alternative financing option in which a student receives education funding in exchange for an agreed-upon percentage of post-graduation income over a set number of years. The Back a Boiler - ISA Fund payback period is typically less than 10 years. An ISA has no principal balance or interest, so its payments adjust with the student's income over the life of the contract, and payments do not begin until the student is employed and earns a defined minimum annual salary in excess of $20,000. There is an upside protection with a cap set for students who do exceptionally well following graduation.

Students are encouraged to discuss Back a Boiler and other financial aid options with a financial aid counselor and their parents or guardians before choosing which program works best for them. Back a Boiler is not intended to be an alternative for federally subsidized education loans. More information is available at https://purdue.edu/backaboiler/.

Income share agreements were conceived in the 1950s but never meaningfully implemented until Purdue's program. Unlike a loan, an ISA has no principal balance or interest, so its payments adjust with the student’s income over the life of the contract. If a student makes less income than expected, he or she is not beholden to the investors for any more than the agreed-upon percentage of actual income earnings.