When disease threatens animals, predators might provide the remedy 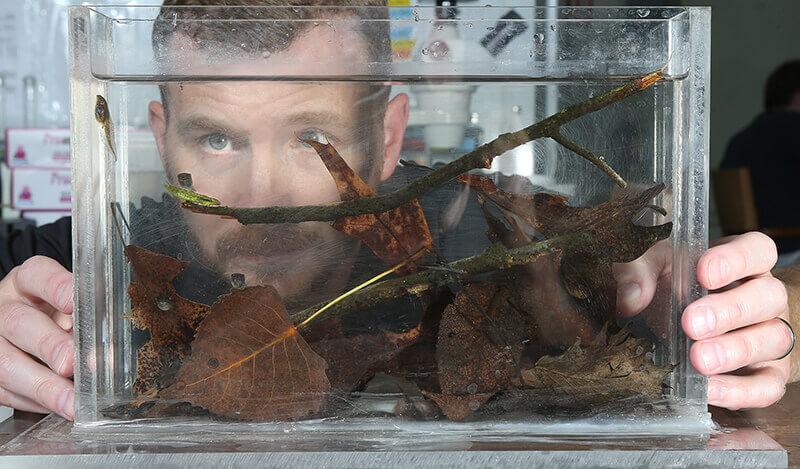 Jason Hoverman’s research shows that predators can reduce infection prevalence in prey populations, and that some prey infected with a pathogen may be more susceptible to predators. The findings provide evidence that biodiversity plays an important role in population health. (Purdue Agricultural Communication photo/Tom Campbell) Download image

WEST LAFAYETTE, Ind. – When disease shows up in wild animal populations, there aren’t pharmacies or vets to turn to. The best solution might actually be the one thing they spend their lives avoiding – predators.

Jason Hoverman, an associate professor in Purdue’s Department of Forestry and Natural Resources, studies the interactions between predators and pathogens in animal populations. He has shown that biological diversity – which includes the presence of predators – can improve the health of some animal populations, and that the predators are sometimes more likely to attack infected individuals.

“The healthy herd hypothesis suggests that predators can play a role in reducing disease risk for wild animal populations,” Hoverman said. “Predators can do a lot of things to determine the likelihood of an individual transmitting an infection to others in the population. We’ve found that predators reduce the density of prey populations and consequently the chances that a sick individual encounters and infects healthy individuals.”

Hoverman and his graduate students, Samantha Gallagher and Turner DeBlieux, tested the healthy herd hypothesis by exposing grey treefrog and northern leopard frog tadpoles to ranavirus and then introducing them to predatory dragonfly larvae. The results, published in the Journal of Animal Ecology, showed that the predators reduced infection prevalence 57 percent (grey treefrogs) to 83 percent (northern leopard frogs).

“In leopard frogs, the predators nearly removed the pathogen completely,” Hoverman said. “It’s possible that a predator could exclude a pathogen from a system because of its effects on population density.”

In another experiment published in Diseases of Aquatic Organisms, the scientists found evidence of pathogen-induced vulnerability to predation, meaning the predator was more likely to attack prey infected with a pathogen. Hoverman’s team exposed the tadpoles of spring peepers, grey treefrogs, American toads and northern leopard frogs to ranavirus and larval dragonflies and tracked survival. For three of the four species, they found that exposure to ranavirus reduced survival rates with dragonflies between two and nine times compared to unexposed tadpoles.

“Our recent work has shown that exposure to ranavirus causes tadpoles to increase activity and move erratically,” Hoverman said.  For motion-based predators like dragonflies, these changes make it easier to spot and catch prey.

Moving forward, Hoverman’s team plans to conduct field surveys to determine whether communities with more diverse predator communities have lower disease risk.  They also will investigate how chemical contaminants, such as pesticides, might influence the healthy herds effect.

The National Institutes of Health supported the research.

Within communities, pathogens and parasites have the potential to indirectly influence predator-prey interactions. For instance, prey that exhibit pathology or altered traits (e.g., behavioral shifts) following infection could be more prone to predation, which is known as parasite-induced vulnerability to predation (PIVP). PIVP has been frequently documented for pathogens with trophic transmission, because predators are often critical in the pathogen’s life cycle. However, for pathogens without trophic transmission, PIVP can lead to a healthy herds effect thereby reducing transmission in the system. In this study, we explored whether the pathogen ranavirus (Family Iridoviridae) enhances vulnerability of four species of larval amphibians (spring peepers Pseudacris crucifer, gray treefrogs Hyla versicolor, American toads Anaxyrus americanus, and northern leopard frogs Lithobates pipiens) to two common tadpole predators (larval green darners Anax junius and adult water bugs Belostoma flumineum). For each anuran species, we conducted short-term microcosm experiments to assess predation rates on individuals that were or were not exposed to virus. For 3 of the 4 species, we found that exposure to ranavirus decreased survival rates with Anax between 2- and 9-fold. However, we did not see the same trend with Belostoma, which indicates that predator identity is important in this interaction. More specifically, the higher efficiency of Anax in capturing and consuming prey, relative to Belostoma, may allow Anax to capitalize on trait changes induced by virus exposure and enhance the PIVP effect. Our results indicate that trait-mediated indirect effects could play a role in creating healthy herds in amphibian communities.