Scientists also report that even a mild hit or blast to the brain can benefit from early detection, treatment.

WEST LAFAYETTE, Ind. – A traumatic brain injury is often easily suspected and can be confirmed and treated if necessary following an injury using a blood analysis, but scientists are reporting that even one mild blast to the brain can cause very subtle but permanent damage as well. Urine analysis taken within one week of a mild to traumatic brain injury also can provide faster diagnosis and treatment for such injuries.

“We’re finding that even a mild blast can cause long-term, life-changing health issues,” said Riyi Shi, a professor of neuroscience and biomedical engineering in Purdue University’s Department of Basic Medical Sciences. “The individual appears to be fine, and it’s difficult to tell if you just look at a person. But the fact is that these types of hits are multiplied over years and often ignored until someone reaches an age when other factors come into play. Identifying and treating these incidents sooner can help mitigate issues later in life.” 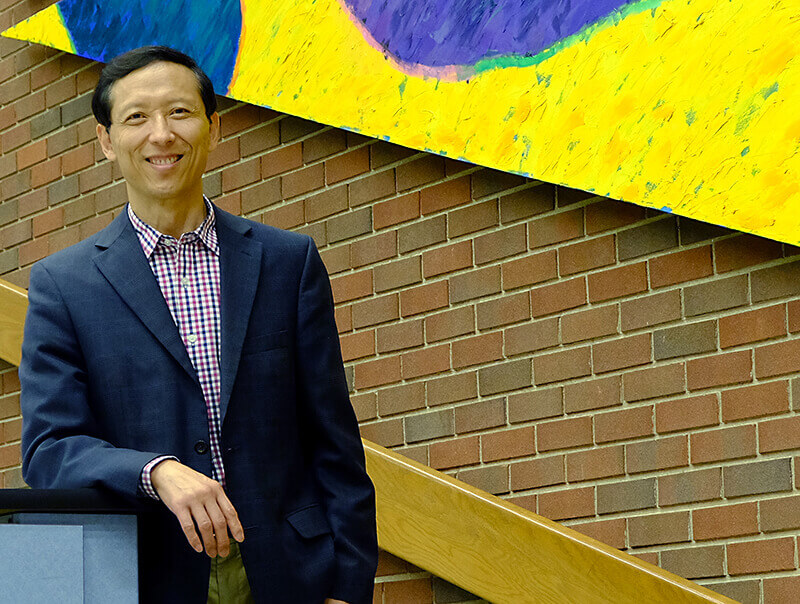 A study led by Shi reports that checking the urine within seven days following such an injury, even a mild injury with no immediately obvious symptoms, could be less invasive, faster and help reduce the risk of long-term health issues including Parkinson’s disease.

“Even at one day post injury, a simple urine analysis can reveal elevations in the neurotoxin acrolein. The presence of this “biomarker” alerts us to the injury, creating an opportunity for intervention,” said Shi, who has appointments in Purdue’s College of Veterinary Medicine and Weldon School of Biomedical Engineering. “This early detection and subsequent treatment window could offer tremendous benefits for long-term patient neurological health.”

The research paper, titled “Acrolein-mediated Alpha-synuclein Pathology Involvement in the Early Post-injury Pathogenesis of Mild Blast-induced Parkinsonian Neurodegeneration,” was published in July in the Journal of Molecular and Cellular Neuroscience.

“Most people have heard that traumatic brain injuries are linked to Parkinson’s, Alzheimer’s and other neurodegenerative diseases, dating back as far as to Muhammad Ali and even earlier,” Shi said. “The seriousness of this relationship is readily apparent; however, we want to, for the first time, implement a mechanism or protocol capable of connecting brain injuries to these diseases. We can accomplish this by testing for acrolein, which is well-researched and already recognized as a very important pathological factor in Parkinson’s disease. This study establishes a solid link between the two and opens the door for faster treatments utilizing acrolein urine tests during the days following a traumatic episode.”

In the research study, a urine analysis tested for an increased elevation of acrolein or oxidative stress within one week following a neurological injury.

“What’s important is that urine tests can be performed much easier than blood tests or other more invasive medical procedures currently available,” Shi said. “And it has been shown that individuals who experience brain injuries are three times more likely than their age-matched peers to develop neurological disease. If we can establish a protocol to routinely test urine following a traumatic brain injury, we can improve treatment options earlier and potentially offer better long-term outcomes.”

More than 500,000 people in the U.S. are currently living with Parkinson’s disease, and another 50,000 people are diagnosed with this neurodegenerative disorder every year, according to the National Institutes of Health.

A video about the link between acrolein and Parkinson’s disease based on Shi’s research is available here.

The research was funded in part by the National Institutes of Health, the Indiana State Department of Health, and the Indiana CTSI Collaboration in Biomedical Translational Research Pilot Program.

Shi’s work aligns with Purdue's Giant Leaps celebration, acknowledging the university’s global advancements in health as part of Purdue’s 150th anniversary. This is one of the four themes of the yearlong celebration’s Ideas Festival, designed to showcase Purdue as an intellectual center solving real-world issues.

The technology is patented through the Purdue Office of Technology Commercialization. Contact otcip@prf.org. for more information.

The research dovetails with the goals of a recently formed Purdue Institute for Integrative Neuroscience, at Purdue’s Discovery Park. The institute spans 25 departments and includes around 100 faculty engaged in neuroscience-related research.

The Purdue Office of Technology Commercialization operates one of the most comprehensive technology transfer programs among leading research universities in the U.S. Services provided by this office support the economic development initiatives of Purdue University and benefit the university's academic activities. The office is managed by the Purdue Research Foundation, which received the 2016 Innovation and Economic Prosperity Universities Award for Innovation from the Association of Public and Land-grant Universities. For more information on licensing a Purdue innovation, contact the Office of Technology Commercialization at otcip@prf.org. The Purdue Research Foundation is a private, nonprofit foundation created to advance the mission of Purdue University.

Note to Journalists: For a copy of the paper, please contact Cynthia Sequin, Purdue Research Foundation, at casequin@prf.org

Survivors of blast-induced traumatic brain injury (bTBI) have increased susceptibility to Parkinson's disease (PD), characterized by α-synuclein aggregation and the progressive degeneration of nigrostriatal dopaminergic neurons. Using an established bTBI rat model, we evaluated the changes of α-synuclein and tyrosine hydroxylase (TH), known hallmarks of PD, and acrolein, a reactive aldehyde and marker of oxidative stress, with the aim of revealing key pathways leading to PD post-bTBI. Indicated in both animal models of PD and TBI, acrolein is likely a point of pathogenic convergence. Here we show that after a single mild bTBI, acrolein is elevated up to a week, systemically in urine, and in whole brain tissue, specifically the substantia nigra and striatum. Acrolein elevation is accompanied by heightened α-synuclein oligomerization, dopaminergic dysregulation, and acrolein/α-synuclein interaction in the same brain regions. We further show that acrolein can directly modify and oligomerize α-synuclein in vitro. Taken together, our data suggests acrolein likely plays an important role in inducing PD pathology following bTBI by encouraging α-synuclein aggregation. These results are expected to advance our understanding of the long-term post-bTBI pathological changes leading to the development of PD, and suggest intervention targets to curtail such pathology.