Petrus Langenhoven is explaining to attendees how to grow sweet peppers in a high tunnel and reflects on results from a high tunnel bell pepper variety trial that was conducted in 2018 at the Purdue Student Farm. (Courtesy photo) Download image

Hosted by Purdue’s Department of Horticulture and Landscape Architecture, the field day featured lectures on planting and sustainability, soil care, high tunnels, cover crops, small-scale equipment, food safety and more. The day started in a classroom and ended with participants watching and listening to demonstrations put on by Purdue staff at the Student Farm.

“The event was a resounding success,” said Petrus Langenhoven, Purdue’s horticulture and hydroponics crop specialist in the Department of Horticulture and Landscape Architecture. “Attendees love the fact that they can learn some theory in the classroom in the morning and then go for a hands-on session at the farm. It’s like you can feel the energy and passion of growers when they attend our field day.”

Langenhoven said the event attracted three times as many participants than the first, which was held last summer.

“We were surprised that interest has grown so much in one year, but it clearly shows that horticulture farmers in Indiana are in need of information to increase the profitability of their farming businesses,” he said. “Attendees were very engaged and showed lots of interest during the on-farm tours. Some of them have told me it was the best field day they have attended and that they will be back next year.” 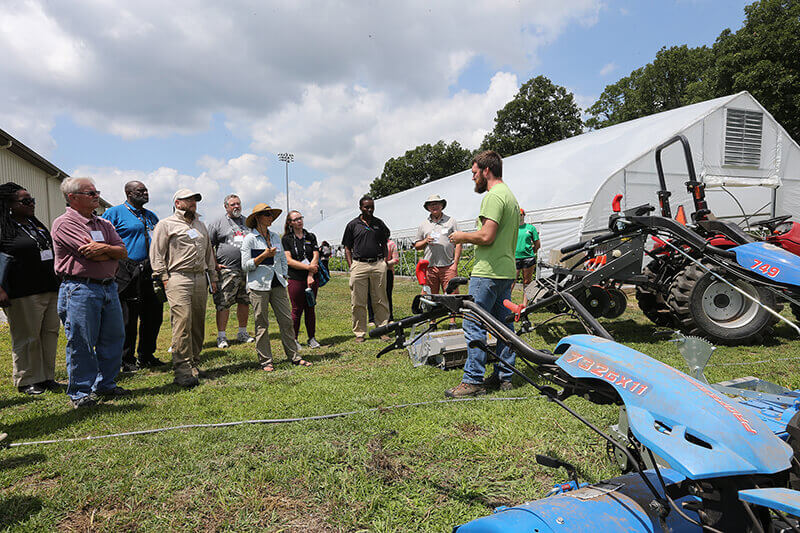 Chris Adair, the Purdue Student Farm manager, demonstrates to attendees the different applications of a power harrow and rototiller when used in conjunction with a walk-behind tractor. (Courtesy photo) Download image

Lori Jolly-Brown, Extension events and communications coordinator, said, “We had more new attendees this year who complimented us on the program. Return attendees said they appreciate keeping up on new educational information to put to good use on their farms.”

Participants of the program were a diverse group — from beginners and experienced growers, to hobbyists and small business practitioners. Rocio Rodea, a teacher from Gary, came looking for advice she could apply to a community garden she helped establish and eventually will use as a tool for her students. She was particularly interested in the morning food safety session. Langenhoven said attendees in general were very attentive and asked a lot of good questions in the morning sessions.

“I was super interested in the food safety portion because Gary has started to put on several farmers markets throughout the week, so every urban farm or garden will have its turn to host,” Rodea said.

Sierra Yeary, a participant hoping to grow some vegetables for a brewery restaurant she is opening next year, learned about cool and warm season vegetables for the first time.

Along with a networking lunch, the afternoon consisted of six informational stations where attendees learned about high tunnel tomato and bell pepper production, the practical applications of leaf mold composting, field production of onions and tomatoes, the use of solar dryers for postharvest processing and vegetable wash station design.

“The student farm was a hive of activity with over a hundred people enjoying the perfect weather and exchanging all manner of tricks of the trade,” said Steve Hallett, a professor of horticulture who presented one of the afternoon stations.

Johnny Washington, a grower with a small vegetable market in Gary, said he learned new techniques to implement on his operation during the afternoon stations.

“I don’t have a hoop house, so sometimes when it rains hard the dirt splashes up onto the leaves, and I learned that can cause diseases,” he said. “A light bulb sort of went on in my head — so I’ll be looking more closely into putting plastic around the base of the plants.”

Shelly Janowski and her husband attended the field day to learn new techniques and planning for their already-established small fruit and vegetable farm.

“We’re looking at some of their techniques of planting, weed suppression and harvesting,” she said. “This has been very valuable. If you can learn something to make things easier, to have it take less time or increase your production, that could be a game-changer.”

Demonstrations on how to use a rototiller, power harrow and tractor-mounted seeder were also part of the afternoon stations.

“We can’t afford to spend $40,000 on a piece of equipment,” said Janowski’s husband, Mark. “But if there’s something small or used we can get, or something to use in a way other than what was intended, that’s very helpful.”

Langenhoven, who initiated the Small Farm Education Program, has plans to expand its reach to other Indiana cities, especially those with large numbers of urban and peri-urban farms such as Gary, Fort Wayne and Indianapolis. He and his collaborators would like to find more funding and the right partners to move that plan forward. For now, the next Field Day is scheduled July 30, 2020, at the Purdue Student Farm, and will showcase additional technologies and information useful to horticulture growers.