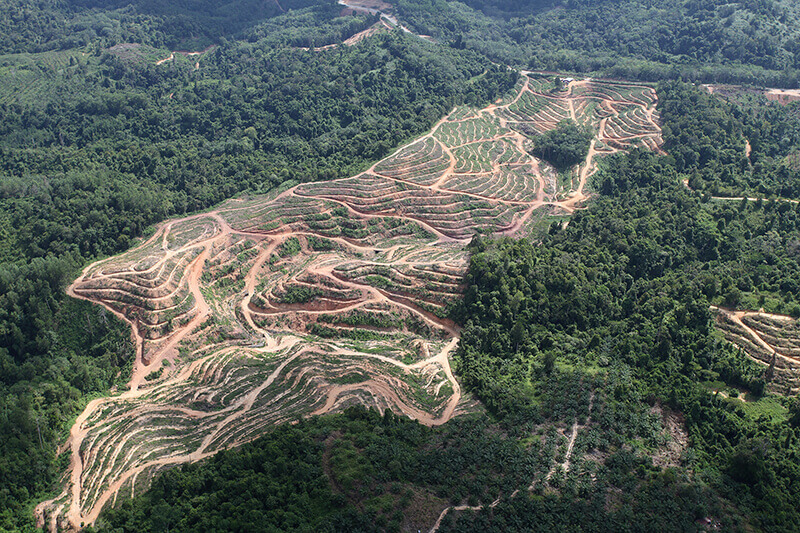 In Malaysia, rainforests are being cleared to make way for oil palm plantations. Efforts to limit this type of deforestation will have implications for the Indonesian and Malaysian economies. (Photo courtesy mongabay.com) Download image

WEST LAFAYETTE, Ind. – The growth of palm oil, the most-consumed vegetable oil in the world, has been fueled by expansion of palm plantings in Malaysia and Indonesia that have contributed to massive deforestation in those countries. The carbon and biodiversity losses there have spurred the European Union and others to call for measures to slow palm oil sales and limit forest losses.

Purdue University economists warn that global measures to decrease palm oil production will have repercussions in Malaysia and Indonesia that will affect the rest of the world. Their study modeling likely policy outcomes, published this week in the Proceedings of the National Academy of Sciences, shows that these impacts could negate any forest savings and damage Malaysian and Indonesian economies.

“If Malaysia and Indonesia let the Europeans use trade policy to reduce palm oil production, those countries are going to be hurt significantly because the demand for their products and prices will decline. We show that it would be better for Malaysia and Indonesia to be proactive in the face of demands for change,” said Farzad Taheripour, a Purdue research associate professor of agricultural economics and lead author on the study.

Palm oil production has increased 53 million metric tons from 1990 to 2016 based on its wide use in foods and cosmetics. That expansion, most of it in Southeast Asia, also has led to significant carbon emissions from burning and clearing forests to plant oil palms and the loss of biodiversity, including critically endangering orangutans on Indonesian and Malaysian islands.

Taheripour and Thomas Hertel, Purdue Distinguished Professor of Agricultural Economics, collaborated with Navin Ramankutty, professor and Canada Research Chair in Global Environmental Change and Food Security at the University of British Columbia, to understand the ramifications of three potential policy proposals. They used the  GTAP-BIO model, a Purdue-led computer model of the global economy available to researchers around the world for quantitative analysis of international policy issues.

In the first scenario, Malaysia and Indonesia would voluntarily revert to 2011 levels of palm oil production through regulation or taxes on the palm industry. But, according to the model, persistent global demand for vegetable oil and other foods would lead farmers in those countries and elsewhere to continue clearing land to plant other crops.

This outcome would result in no reduction in deforestation, and the Malaysian and Indonesian agricultural sectors would see economic losses.

“You just don’t benefit a lot in terms of reduction in deforestation. More lands are cleared for increases in other oil crops, and we don’t see much potential to enhance forest cover,” Taheripour said. “At the same time, Malaysia and Indonesia take a serious hit to agricultural income.”

In the second scenario, Malaysia and Indonesia would limit palm oil production to 2011 levels and offer subsidies to farmers to stop them from clearing forests. In that case, forested land increases and other countries cannot make up the shortfall in palm oil, causing prices to rise and benefiting the Malaysian and Indonesian economies.

“This is the best option for Malaysia and Indonesia because they’re using monopoly-like power to control the market,” Hertel said. “It also shows the importance of direct intervention and providing incentives to halt deforestation.”

In the third scenario, other countries, including those in Europe, would take action, setting tariffs on palm oil importation. That raises prices and slows demand while also achieving similar results on forest cover as the second scenario – provided forest subsidies are still implemented. In this case, the economic benefit goes to the European countries that collect tariffs and not Malaysia and Indonesia.

“By restricting output and forest land conversion domestically, the Malaysia and Indonesia region reaps the benefits of higher palm oil prices. When they leave it to others to implement import restrictions, these benefits go to the importers in the form of higher tariff revenues and improved export prices,” the authors write.

The National Science Foundation and the U.S. Department of Agriculture’s National Institute of Food and Agriculture funded the research.

The global demand for palm oil has grown rapidly over the past decades. Much of the output expansion has occurred in carbon and biodiversity-rich forest lands of Malaysia and Indonesia (M&I) contributing to record levels of terrestrial carbon emissions and biodiversity loss. This has led to a variety of voluntary and mandatory regulatory actions as well as calls for limits on palm oil imports from M&I. This paper offers the first comprehensive, global, assessment of the economic and environmental consequences of alternative policies aimed at limiting deforestation from oil palm expansion in M&I. It highlights the challenges of limiting forest and biodiversity loss in the presence of market-mediated spillovers into related oilseed and agricultural commodity and factor markets, both in M&I and overseas. Indeed, limiting palm oil production or consumption is unlikely to halt deforestation in M&I in the absence of active forest conservation incentives. Policies aimed at restricting palm oil production in M&I also have broader consequences for the economy, including significant impacts on consumer prices, real wages, and welfare that vary between different world regions. A crucial distinction is whether the initiative is undertaken domestically, in which case the M&I region could benefit, or by major palm oil importers, in which case M&I loses income. Nonetheless, all policies considered here pass the social welfare test of global carbon dioxide mitigation benefits exceeding their costs.