Purdue center to focus on development of Earth-moon economy


WEST LAFAYETTE, Ind. — To create a sustainable presence beyond Earth, humans need to further expand into the region encompassing Earth and the moon, called “cislunar space.” That takes building an infrastructure that opens up economic expansion, just as the interstate highway system spurred economic growth in the U.S.

Purdue University is leading an effort that will provide national leadership in the development of cislunar capabilities and advance the space-based economy through collaboration with industry, academia and government agencies. 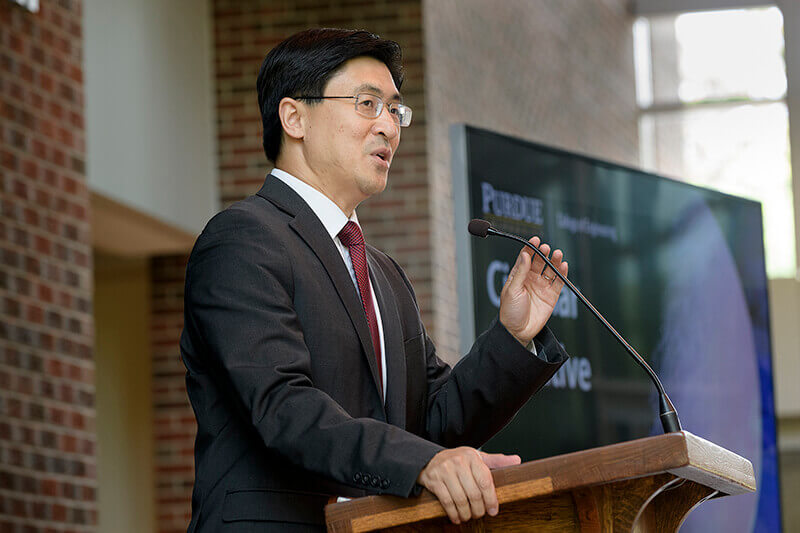 “On July 18, 1969, after a journey over 200,000 miles from Earth, Apollo 11 crossed into the moon’s gravitational sphere of influence, a perfect example of cislunar space. Fifty years later on the same day, we are proud to launch the Purdue Engineering Initiative in Cislunar Space. From research and commercialization to talent development, our faculty, students and staff will contribute to critical dimensions of the next 50 years of small steps and giant leaps in space,” said Mung Chiang, the John A. Edwardson Dean of Purdue’s College of Engineering.

Purdue, the “Cradle of Astronauts,” is internationally known for its strengths in propulsion, mission design, habitats in space and systems engineering. The initiative will unite and leverage these capabilities to increase access to the inner solar system. A YouTube video is available here. 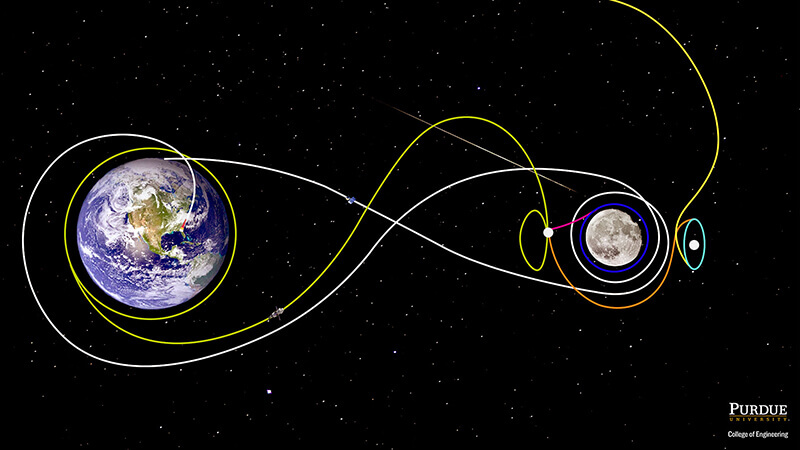 “It’s time to expand our space infrastructure beyond Earth’s orbit to include the moon,” said David Spencer, co-chair of the Cislunar Initiative and an associate professor of aeronautics and astronautics at Purdue. “Moving forward, we will need access to space resources in order to achieve our exploration objectives. The Cislunar Initiative is geared toward conceiving and enabling the systems needed to support long-term human and robotic operations in the cislunar environment.”

NASA’s Artemis program aims to return astronauts to the moon by 2024, leading to a projected sustained human presence on the lunar surface by 2028. The space industry already generates $350 billion annually in revenue and is expected to reach $3 trillion per year over the next 30 years. Space tourism, followed by suborbital point-to-point business travel, will also bring a new source of revenue.

If we want to one day use orbits that would make going to Mars more convenient, for example, we’ll need to access the cislunar space and facilitate vehicle movement within the region with a reasonable amount of propellant. Purdue’s strength is in building that transportation system,” said Kathleen Howell, Purdue’s Hsu Lo Distinguished Professor of Aeronautics and Astronautics and a co-chair of the Cislunar Initiative. 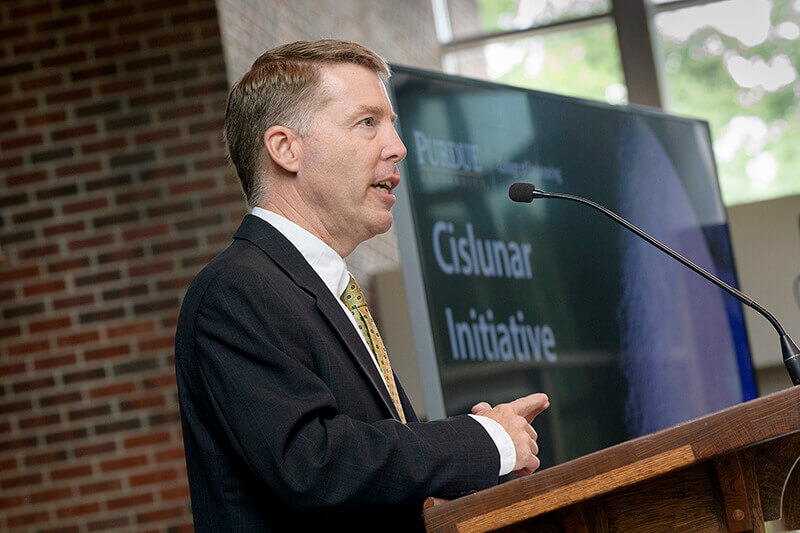 David Spencer, co-chair of the cislunar space initiative and an associate professor of aeronautics and astronautics at Purdue University, discusses the effort to provide national leadership in the development of cislunar capabilities. (Purdue University photo) Download image

As the orbital economy grows, there will be space traffic to manage and assets to defend. Creating human habitats on the moon will also require robust methods of protecting people from extreme temperatures and radiation.

This calls for putting new policies and infrastructure in place to ensure that space is free from activities that may produce space debris, which could be catastrophic for both human and robotic systems in the cislunar environment. It also means creating more opportunities to fund and develop the technology needed for establishing a presence on the lunar surface.

This initiative aligns with Purdue's Giant Leaps celebration, acknowledging the university’s global advancements made in space as part of Purdue’s 150th anniversary. This is one of the four themes of the yearlong celebration’s Ideas Festival, designed to showcase Purdue as an intellectual center solving real-world issues.

Note to Journalists: B-roll event footage will be available later this afternoon at https://bit.ly/2XRjz4s. Photos will be added to the release after the announcement. A YouTube video is available at https://youtu.be/_tq7gVRrpxY, and other multimedia will be added later at http://bit.ly/cislunar-media, prepared by Erin Easterling, digital producer for the Purdue College of Engineering, 765-496-3388, easterling@purdue.edu.