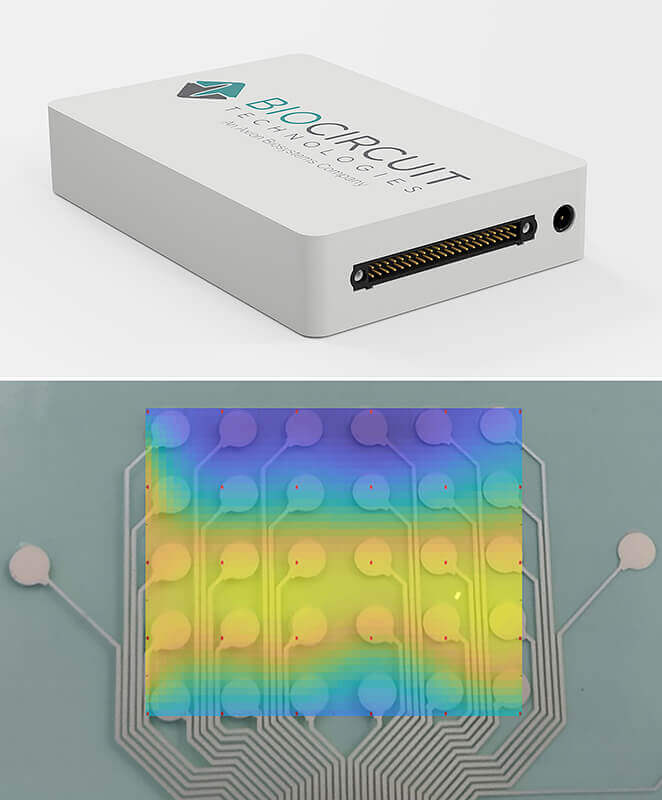 Photos show the electrodes and recording system to be used on the human vagus nerve to as part of research by Matt Ward, research assistant professor of biomedical engineering, and clinical and industry colleagues into the treatment of gastroparesis. (Photo provided) Download image

WEST LAFAYETTE, Ind. — Patented artificial intelligence from Purdue is being used to provide scientists with the insight needed to determine if current treatments truly help people with a chronic stomach disorder.

Gastroparesis, which translates to paralysis of the stomach, is associated with significant symptoms such as vomiting or nausea upon any food consumption. The symptoms result from improper digestion in the stomach.

There are no effective drug treatments for the disorder and the final treatment option is an implant called a gastric electrical stimulator, which more than 8,000 people receive annually. Fewer than 200,000 cases of the disorder are reported each year.

Matt Ward, research assistant professor of biomedical engineering, said the nature of the stimulator’s relief is the reason for the research, saying it is unpredictable at this point how quickly symptoms are dealt with and to what degree.

“Despite over two decades of use, nobody knows exactly how the stimulator works or how to customize the device settings to match a patient’s need,” said Ward, who researches computational neuroscience as well as bioelectronic treatments for inflammation, depression and other problems.

“We aim to change all of this by capturing and analyzing nerve response patterns that predict if and how subjects will benefit from their gastric electrical stimulation therapy. This could lead to more intelligent, patient friendly treatments for gastroparesis that have more predictable results.”

This project is a unique academic-clinical-industry collaboration between Purdue, the lead institution; Tom Nowak, a doctor of gastroenterology and hepatology at Indiana University Health; Tom Everett, a faculty member in the IU School of Medicine studying cardiac electrophysiology; and Isaac Clements, chief technology officer at BioCircuit Technologies.

Ward’s project recently received $620,000 in funding and is expected to receive an estimated $1.5 million in total funding over three years, from the Common Fund’s Stimulating Peripheral Activity to Relieve Conditions (SPARC) program at the National Institutes of Health.

He said future therapies could be conducted by using a multi-electrode array to stimulate and record from the vagus nerve, which is the primary nerve supply to the stomach. The patented artificial intelligence technology is designed to monitor stimulation and adapt to changes in the individual patient’s sensitivity to the therapy, essentially tailoring the device to the patient and therapeutic need with little intervention.

“Manually deriving the relationship between the stimulus strength and nerve response could take days and was not previously possible without invasive surgery, but our breakthrough allows anyone to automatically gain that information for all nerve fibers in a matter of minutes without additional surgery,” Ward said.

The learned associations between vagal nerve response patterns and patient symptoms can now be used to predict how subjects will respond to the gastric electrical stimulation therapy. This includes avoidance of unwanted effects that include stomach pain and irritation, among others.

Ward said determining the reaction can open the doors to figuring out a better way to deliver the therapy. This grant will allow research to explore these signals at unprecedented resolution through collaboration with BioCircuit Technologies.