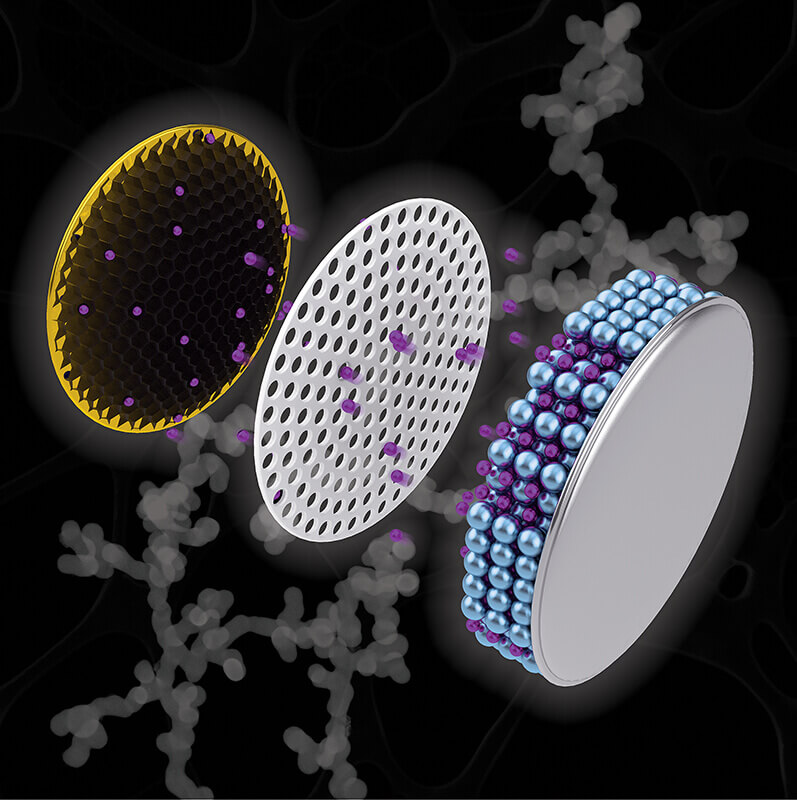 Artistic depiction of a coin cell battery with a copper electrode (left) containing a black nanochain structure, which researchers have discovered could increase the capacity of a battery and cut charging time. (Purdue University illustration/Henry Hamann) Download image

WEST LAFAYETTE, Ind. — How long the battery of your phone or computer lasts depends on how many lithium ions can be stored in the battery’s negative electrode material. If the battery runs out of these ions, it can’t generate an electrical current to run a device and ultimately fails.

Materials with a higher lithium ion storage capacity are either too heavy or the wrong shape to replace graphite, the electrode material currently used in today’s batteries.

Purdue University scientists and engineers have introduced a potential way that these materials could be restructured into a new electrode design that would allow them to increase a battery’s life span, make it more stable and shorten its charging time.

The study, appearing as the cover of the September issue of Applied Nano Materials, created a net-like structure, called a “nanochain,” of antimony, a metalloid known to enhance lithium ion charge capacity in batteries.

Some types of commercial batteries already use carbon-metal composites similar to antimony metal negative electrodes, but the material tends to expand up to three times as it takes in lithium ions, causing it to become a safety hazard as the battery charges.

“You want to accommodate that type of expansion in your smartphone batteries. That way you’re not carrying around something unsafe,” said Vilas Pol, a Purdue associate professor of chemical engineering. 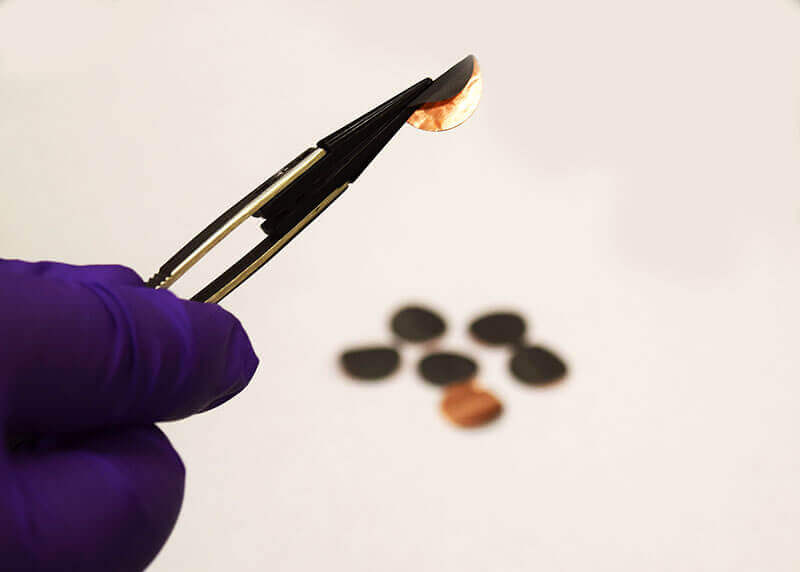 A new method could allow better materials to make up battery electrodes by converting them into a nanochain structure, the black material on this copper electrode of a coin cell. (Purdue University image/Kayla Wiles) Download image

Through applying chemical compounds – a reducing agent and a nucleating agent – Purdue scientists connected the tiny antimony particles into a nanochain shape that would accommodate the required expansion. The particular reducing agent the team used, ammonia-borane, is responsible for creating the empty spaces – the pores inside the nanochain – that accommodate expansion and suppress electrode failure.

The team applied ammonia-borane to several different compounds of antimony, finding that only antimony-chloride produced the nanochain structure.

“Our procedure to make the nanoparticles consistently provides the chain structures,” said P. V. Ramachandran, a professor of organic chemistry at Purdue.

The nanochain also keeps lithium ion capacity stable for at least 100 charging-discharging cycles. “There’s essentially no change from cycle 1 to cycle 100, so we have no reason to think that cycle 102 won’t be the same,” Pol said.

The electrode design has the potential to be scalable for larger batteries, the researchers say. The team plans to test the design in pouch cell batteries next.

This work was financially supported by the Herbert C. Brown Center for Borane Research.

Note to Journalists: For a copy of the paper, please contact Kayla Wiles, Purdue News Service, at wiles5@purdue.edu

Three-dimensional antimony nanochain architectures with a rhombohedral phase, possessing particle sizes of ~30 nm, have been prepared via ammonia–borane reduction of SbCl3 in an aqueous medium, followed by nucleation and capping processes. These offer adequate space to abate the large volumetric expansion during lithiation. Lithium-ion batteries fabricated with these antimony nanochains exhibited a stable specific charge capacity of 523 mAh g–1 at a C rate of 0.5 C with a Coulombic efficiency of 99.8% and a capacity retention of 92% after 100 cycles.