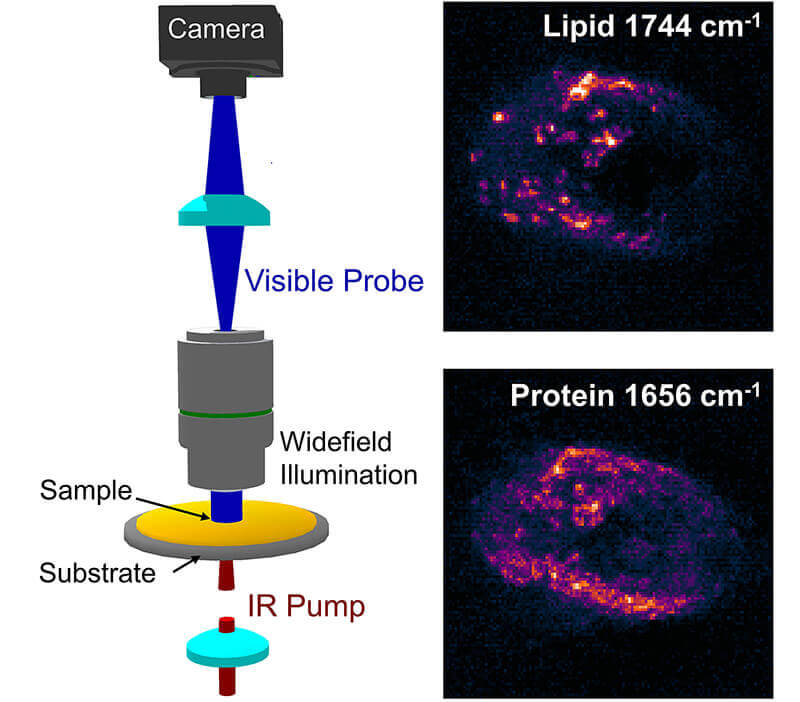 WEST LAFAYETTE, Ind. — More than 174,000 men will be diagnosed with prostate cancer this year, according to the American Cancer Society, putting it behind only skin cancer as the most common cancer among American men.

Ji-Xin Cheng, adjunct professor of Purdue’s Weldon School of Biomedical Engineering and the Department of Chemistry, says a paper in the New England Journal of Medicine found that 1,410 men need to be screened and 48 additional cases of prostate cancer need to be treated to prevent only one death.

“The current examination isn’t precise, so there’s a lot of surgery because doctors can’t tell when there’s a large amount of cancer, whether it’s aggressive or benign,” said Cheng, also the Moustakas Chair Professor of Photonics at Boston University.

New infrared chemical imaging work involving research by Cheng and Ali Shakouri, the Mary Jo and Robert L. Kirk Director of the Birck Nanotechnology Center in Purdue’s Discovery Park, aims to change the paradigm, allowing better microscopic studies of tissue to detect what is there and cut down on unnecessary surgeries.

“The impact will be big,” Cheng said. “This new method would allow the detection of aggressive breast, prostate and other cancers with biomarker information and at submicron spatial resolution.”

The new technology is detailed in a paper appearing Friday (July 19) in the journal Science Advances. Researchers from the Boston University and the Chinese Academy of Sciences collaborated in the work.

A key value of the research is the speed. The proposed method offers a much quicker examination of cells and tissues. It also allows for a larger area mapping, which is important to determine biomarker information.

Cheng said finding markers to determine a cancer’s aggressiveness has been a goal throughout the research. This method allows the examination of living cancer cells rather than drying out the sample in order to be studied by traditional infrared spectroscopy.

The paper describes shining both an infrared excitation laser and another visible probe laser through a sample and measuring the difference between the hot and cold states. Photothermal detection is used to improve the spatial resolution by one order of magnitude compared to traditional infrared microscopy, providing an opportunity to look for the various biomarkers within the cells.

Cheng paired with Shakouri to use a lock-in camera that was fast enough to handle the million pixels per second in parallel. Shakouri, inventor of the lock-in camera, said the camera detects very small changes in light coming into it.

The research builds on work by Cheng and colleagues published three years ago in the same journal. Previous imaging needed 8 seconds per image, considered too slow by Cheng because cells and molecules are in constant motion.

Future research will include work to increase the field of view so that the size of the sample that can be examined can be as large as a few millimeters.

Cheng also wants to push the sensitivity to detect very small particles like a single virus or a single bacterium. The latter can allow faster detection of bacterial response to antibiotics.

“Current medial practice is to spend 1-2 days to culture a specimen, then a doctor can tell you if you if you have an infection or not,” he said. “But if we can measure that at a single bacterium level, that’s a rapid detection. That will be a very important application of this platform.”

Note to Journalists: A copy of the paper is available through the American Association for the Advancement of Sciences at vancepak@aaas.org.

2Center of Materials Science and Optoelectronics Engineering, University of Chinese Academy of Sciences

Infrared (IR) imaging has become a viable tool for visualizing various chemical bonds in a specimen. The performance, however, is limited in terms of spatial resolution and imaging speed. Here, instead of measuring the loss of the IR beam, we utilize a pulsed visible light for high-throughput, widefield sensing of the transient photothermal effect induced by absorption of single mid-IR pulses. To extract such transient signals, we built a virtual lock-in camera synchronized to the visible probe and IR light pulses with precisely-controlled delays, allowing sub-microsecond temporal resolution determined by the probe pulse width. Our widefield photothermal sensing microscope enabled chemical imaging at a speed up to 1250 frames per second, with high spectral fidelity, and offering sub-micron spatial resolution. With the capability of imaging living cells and nanometer-scale polymer films, widefield photothermal microscopy opens a new way for high-throughput characterization of biological and material specimens.