Fifty years after Neil Armstrong landed on the moon, students and researchers can learn about Purdue grad at his alma mater 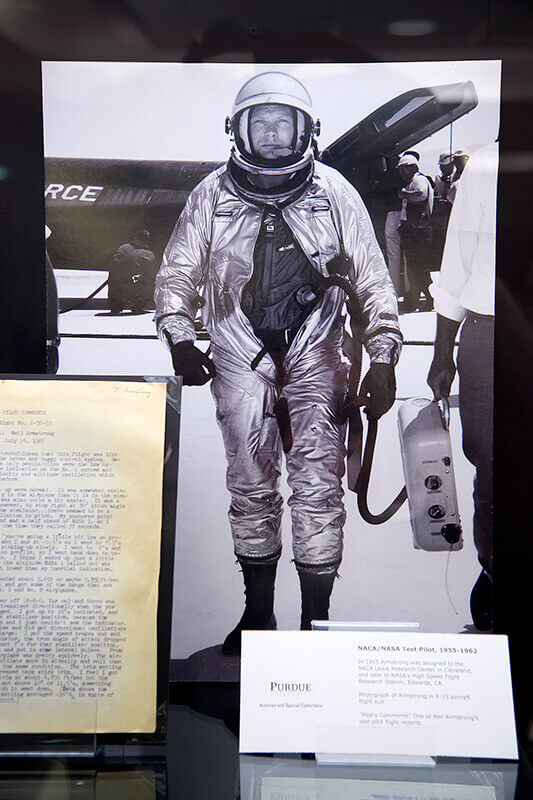 A selection of the “Neil A. Armstrong Papers,” located in Purdue’s Archives and Special Collections, is currently on display for the public through an exhibition titled “Apollo in the Archives: Selections from the Neil A. Armstrong Papers.” The exhibit opened March 18 and has been extended through Oct. 12. (Purdue University / Mark Simons) Download image

Armstrong, the first man to set foot on the moon and a Purdue alumnus, started donating more than 450 boxes of his own manuscripts, personal papers, working files and artifacts during his lifetime. His wife, Carol, has continued to donate items over time. The collection, titled the “Neil A. Armstrong Papers,” is located in Purdue’s Archives and Special Collections and is available for scholarship and learning. Archives and special collections is located within the HSSE Library at the west end of the Stewart Center.

“One of the items that I always pull out when we have students come in is Neil's report cards from Purdue,” said Tracy Grimm, the Barron Hilton Archivist for Flight and Space Exploration and associate head of Archives and Special Collections. “They start to notice that in Calculus II, he got a C. And they light up because they realize that Neil was not perfect and that anyone can get a bad grade once in a while.”

Among the hundreds of boxes housed in Purdue’s Archives and Special Collections are approximately 70,000 pages of fan mail, which Armstrong continued to receive from around the world for years after he landed on the moon; his Purdue student notebooks and project reports; speech manuscripts; and NASA missions training, execution and results documents.

A selection of those items is on display for the public through an exhibition presented by Purdue Archives and Special Collections, “Apollo in the Archives: Selections from the Neil A. Armstrong Papers.” The exhibit opened March 18 and has been extended through Oct. 12. The exhibition commemorates the 50th anniversary of the first manned spaceflight that landed on the moon – where Armstrong took those famed first steps.

Grimm says Armstrong had only one goal in mind when he started donating his personal items: to support Purdue students as they pursue an education.

“These are the materials that really let a scholar, a Ph.D. student, an undergraduate see what the day-to-day life was like for a human being who was involved in the endeavors of flight and space exploration,” Grimm said.

Sammie Morris, professor and head of Archives and Special Collections, says both Armstrong and his wife, Carol, made the decision together to donate his personal papers, knowing that students would be able to access them.

Today, Grimm says, Armstrong’s papers are used on a regular basis for research. During the fall semester, for example, a group of Purdue students who were writing papers on the Apollo era used reports and memos that Armstrong had donated as sources.

“They could see firsthand what concerns the astronauts had during that time,” Grimm said. “It gives students a taste of what it's like to really work in that world. It makes them curious, and it makes them appreciate what you can learn from the past experiences of others.”

With the upcoming 50th anniversary of the moon landing, Grimm says the Armstrong Papers are the perfect real-life example for how far space and flight exploration has come over the years, and is an inspiration to those who want to pursue similar dreams. A video highlighting the Armstrong papers can be found here.

“I think it’s always eye-opening for students to see that Neil was a student just like them, who went to class every day and walked the very same campus,” Grimm said. “I think he would be proud of the fact that his papers are continuing to inspire and educate students every day.”

For the “Apollo in the Archives” exhibit, open now through Oct. 12, here are just a few of the items from the Armstrong Papers that are currently on display.

* A script for a skit written by Armstrong and Elliot See Jr., both part of the Gemini 5 backup crew.

This aligns with Purdue's Giant Leaps celebration acknowledging the university’s global advancements made in Space: Earth, Exploration and Economics.

Note to Journalists: If you are a reporter and have interest in viewing the “Apollo in the Archives: Selections from the Neil A. Armstrong Papers” exhibit, contact Abbey Nickel, Purdue News Service, nickela@purdue.edu or 765-496-1325.