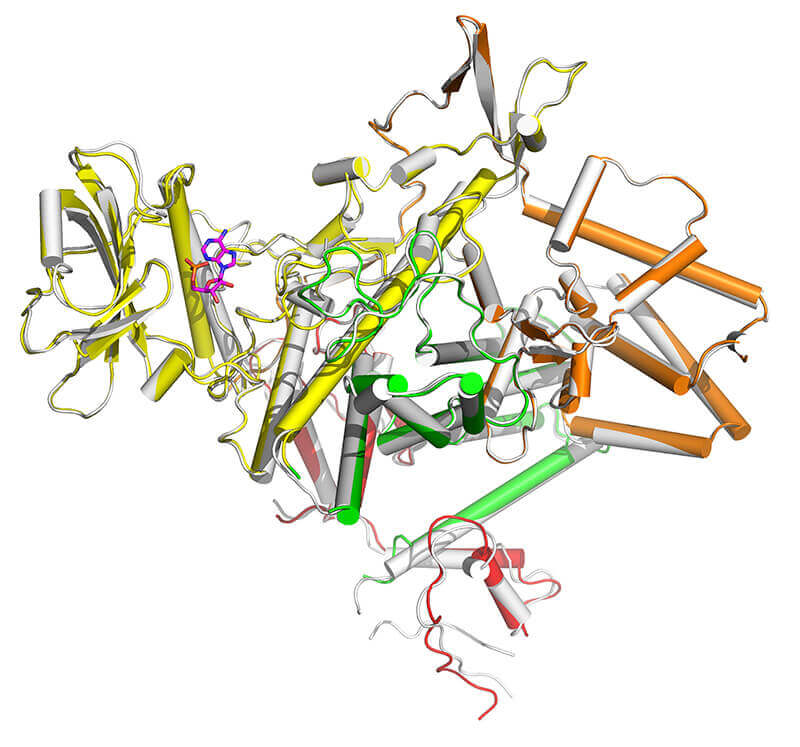 A protein discovered in Legionella pneumophila shows how the bacterium infects cells in the body, and may provide a path for new antibiotics that only affect virulent bacteria. (Purdue University image/Luo) Download image

WEST LAFAYETTE, Ind. — "Take with food" is a common warning for people using antibiotics, but a discovery announced this week in the scientific journal Nature may create a path to more targeted drugs.

This advice for taking antibiotics is needed because current drugs kill any type of bacteria, including the helpful bacteria in our intestines that help us digest our food. When we take current antibiotics, it can cause digestive distress, and even worse outcomes.

Although we may think of bacteria as disease-causing micro-organisms, there are about as many bacteria in your body as human cells. And nearly all are helpful — they are nearly as essential for human survival as air, food, and water. Which is why a more selective antibiotic would be important.

Zhao-Qing Luo, professor of biology at Purdue University, and his team have found the mechanism by which the bacterium that causes Legionnaires' Disease begins its invasion into host cells. This discovery by itself provides a path for treatment of the relatively rare disease, which affects fewer than 20,000 people per year in the United States.

But the implications of the discovery go well beyond Legionnaires'.

Luo and his colleagues found that bacteria inject approximately 300 proteins into the host cell, which allows the bacteria to survive and replicate once inside the host.

Studies from the Luo lab had previously shown that a single enzyme produced by bacteria can override cell defenses speeding infections. The new discovery finds that that enzyme is regulated by a single enzyme through a unique mechanism.

"This provides a new target for drug therapy to fight virulent bacteria," Luo said. "One common problem for current antibiotics is that they kill indiscriminately because they attack the central functionality of the bacterial cells. This will disrupt the microbiome."

Instead, Luo said that a drug that attacked just this infection mechanism would not affect the good bacteria that live in our bodies.

Luo said the injected protein molecule uses the cellular molecule ATP in a way that is unique in how it cleaves the energy molecule, which might provide an attractive mechanism for a drug target.

"Now that we've identified this protein that's required for infection, we can screen for compounds that interfere with its action and investigate those to see if they might be suitable as new drugs," he said.

The bacterial pathogen Legionella pneumophila creates an intracellular niche permissive for its replication by extensively modulating host cell functions using hundreds of effector proteins delivered via its Dot/Icm secretion system1. Among these, members of the SidE family (SidEs) regulate multiple cellular processes by a unique phosphoribosyl ubiquitination mechanism that bypasses the canonical ubiquitination machinery2-4. The activity of SidEs is regulated by SidJ, another Dot/Icm effector5, but the mechanism of such regulation is not completely understood6,7. Here we demonstrate that SidJ inhibits the activity of SidEs by inducing covalent attachment of glutamate moieties to E860 of SdeA, which is one of the catalytic residues for the mono-ADP-ribosyltransferase activity involved in ubiquitin activation2. The inhibition by SidJ is spatially restricted in host cells because its activity requires the eukaryote-specific protein calmodulin (CaM). We solved a structure of SidJ-CaM in complex with adenosine monophosphate (AMP) and found that the ATP utilized is cleaved at the α phosphate position by SidJ which in the absence of glutamate or modifiable SdeA undergoes self-AMPylation. Our results reveal an unprecedented mechanism of regulation in bacterial pathogenicity in which a glutamylation reaction that inhibits the activity of virulence factors is activated by host factor-dependent acyl-adenylation.