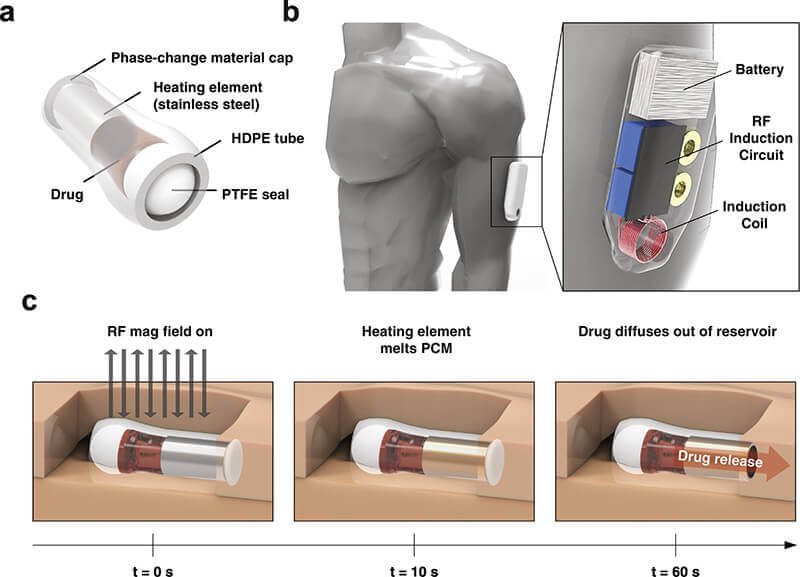 WEST LAFAYETTE, Ind. — Opioid users tend to be alone and incapacitated during an overdose. Purdue University researchers are developing a device that would automatically detect an overdose and deliver naloxone, a drug known to reverse deadly effects.

“The antidote is always going to be with you,” said Hyowon “Hugh” Lee, an assistant professor of biomedical engineering at Purdue. “The device wouldn’t require you to recognize that you’re having an overdose or to inject yourself with naloxone, keeping you stable long enough for emergency services to arrive.”

Overdose happens when opioids bind to receptors in the brain that regulate breathing, causing a person to hypoventilate and die. According the U.S. Department of Health and Human Services, approximately 130 people in the U.S. die every day from opioid-related drug overdoses.

Lee’s team has built a wearable device designed to detect when a person’s respiration rate decreases to a certain level – converted from electrocardiography (EKG) signals – and then release naloxone, which blocks the opioid from binding to brain receptors.

Wearing the device would be similar to wearing an insulin pump: The current proof of concept is an armband that straps on a magnetic field generator, connected to a portable battery worn at the hip. A sticker-like EKG sensor on the skin, such as on the chest, measures respiration rate. When the sensor detects a respiration rate that’s too low, it activates the magnetic field generator to heat up a drug capsule in the body, releasing naloxone in 10 seconds.

The researchers envision the drug capsule being pre-injected under the skin in an outpatient setting. That way, the device system would automatically deliver naloxone to the patient during an overdose, buying about an hour before relapsing. A YouTube video is available at https://youtu.be/b2Bfc4YRm0Y.

According to Lee, that extra hour would give emergency services plenty of time to get the patient to the hospital. The capsule also delivers a larger dose of naloxone than products currently available on the market – making it more effective at delaying relapse – and would be cheaper to manufacture.

Although the device doesn’t yet work automatically, the researchers demonstrated through in vitro and in vivo experiments that the setup successfully detects a low respiration rate from EKG signals and delivers naloxone. Their work appears in the Journal of Controlled Release.

The device has been patented through the Purdue Research Foundation Office of Technology Commercialization. Since submitting the work for publication, the researchers have downsized the magnetic field generator and battery so that the device is less bulky.

“The goal is to make the whole system unobtrusive, so that you don’t feel like you’re having to wear something large all the time,” Lee said.

The researchers also plan to build a communications system into the device that would automatically alert emergency services when the patient has overdosed.

The technology could possibly deliver other drugs besides naloxone.

“People with allergies need epinephrine right away. This setup might remove the need for an epi pen,” Lee said.

Lee’s team built the device in collaboration with Purdue biomedical engineering professors Jacqueline Linnes, Chi Hwan Lee and Craig Goergen. This work was supported by an administrative supplement to a grant from the National Institute on Drug Abuse (5U01DA038886-02) and a fellowship by the National Science Foundation (DGE-1333468).

The research aligns with Purdue's Giant Leaps celebration, acknowledging the university’s global advancements made in health, longevity and quality of life as part of Purdue’s 150th anniversary. This is one of the four themes of the yearlong celebration’s Ideas Festival, designed to showcase Purdue as an intellectual center solving real-world issues.

Note to Journalists: For a copy of the paper, please contact Kayla Wiles, Purdue News Service, at wiles5@purdue.edu. A YouTube video is available at https://youtu.be/b2Bfc4YRm0Y and other multimedia can be found in a Google Drive folder at http://bit.ly/opioid-media. The materials were prepared by Erin Easterling, digital producer for the Purdue College of Engineering, 765-496-3388, easterling@purdue.edu.

With approximately 48,000 attributed deaths in 2017, the opioid overdose is now the leading cause of death amongst Americans under the age of 50. The overdose process can be interrupted by the administration of naloxone, a safe and effective opiate antagonist that can reverse the effects of overdose and minimizing the delay in administering the antidote is critical in preventing permanent damage to patients. A closed-loop implantable drug delivery system is an ideal solution to minimize the response time, however, they often feature complex designs that are expensive to fabricate and require a more invasive surgical implantation. Here we propose a simple, low-cost, minimally-invasive automatic antidote delivery device (A2D2) that can administer a large dose of naloxone upon detection of overdose-induced respiratory failure. The subcutaneously placed device can be activated using an externally applied time varying magnetic field from a wearable device. Using a custom magnetic field generator, we were able to release the drug within 10 s. Our bench-top evaluation showed that A2D2 can release 1.9 mg of powdered drug within 60 s and up to 8.8 mg in 600 s. We also performed in vivo evaluation to demonstrate rapid drug releasing capability in the subcutaneous space of mice. However, we saw a small amount of leakage (1.75% of payload) over the course of 1000 h of simulated implantation. Thus, additional research is needed to verify the long term stability of our device and to demonstrate the closed-loop release mechanism to revive overdosed animals. Nevertheless, our preliminary results show the potential of using a simple, low-cost, subcutaneous device for emergency drug delivery application.