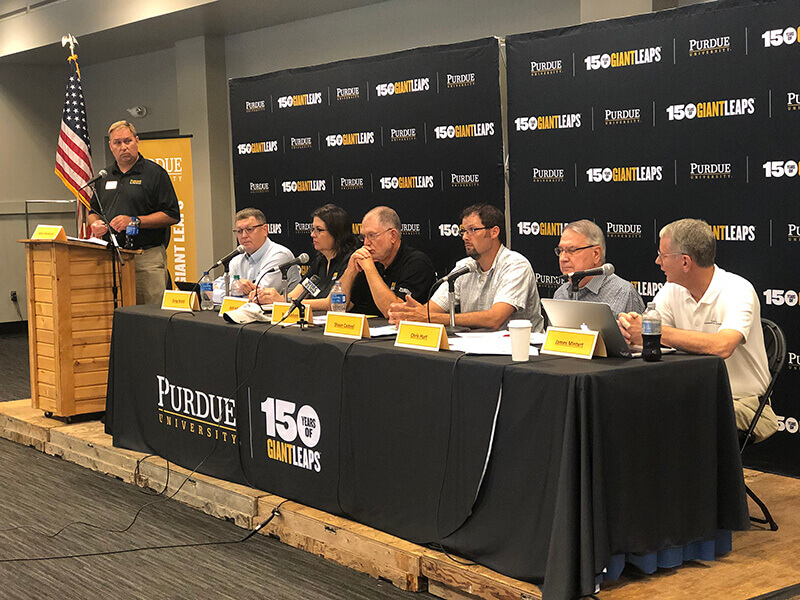 WEST LAFAYETTE, Ind. – “This was not a normal year,” said Greg Matli, Indiana state statistician for the United States Department of Agriculture’s (USDA) National Agricultural Statistics Service, regarding the 2019 USDA crop report. “Nothing like 2019 has happened in our history before.”

Weather conditions challenged Hoosier farmers during the 2019 planting and growing season. An uncharacteristically wet planting season and periods of abnormally extreme heat and drought during the growing season threaten yields, according to Hall. Exact yields, however, she continued, prove difficult to predict this year.

“This is such a strange year, there haven’t been enough comparative years for these climate outlook models. We’re really looking one to two weeks out, maybe three weeks,” Hall said.

Nielsen said of Indiana’s corn crop, “We’re in uncharted territories. This season there are still some questions and concerns about this crop that was planted so far into June. The risk of corn not maturing safely before that fall freeze involves the date of the expected freeze but also depends on how warm or cool September is going to be.”

September will be an important month for soybeans, too, Casteel added. Soybeans typically mature later than corn crops but also had a late planting season in 2019.

“September will make or break it for us. Hopefully, some of these rains start to come back, he said, while acknowledging that too much rain going forward could be detrimental to the corn crop.”

Difficulties during the planting and growing season mean that revenues will likely be down for Hoosier farmers in 2019, a trend exacerbated by the U.S.’s ongoing trade war with China. Hurt predicted revenue for corn and soybean will be down $1.3 billion from last year’s $6.8 billion.

“If it sounds like a lot, that's because it is a lot,” Hurt said.

“There is still a lot of uncertainty in terms of the final production numbers,” Mintert said, adding that even if the revenue to Hoosier farmers is lower than predicted, farmers will still rely heavily on crop insurance this year.

It’s not all bad news, however, Nielsen and Casteel said. Farmers can still make decisions regarding pest and disease management in soybean crops, Casteel said, which can help maximize potential yield.

“The 100 day corn planted before June 20 should still mature before the freeze, even in Northern Indiana,” Nielsen said.

The USDA August Crop Report is available at: https://release.nass.usda.gov/reports/crop0819.pdf