Cold, dry planets could have a lot of hurricanes 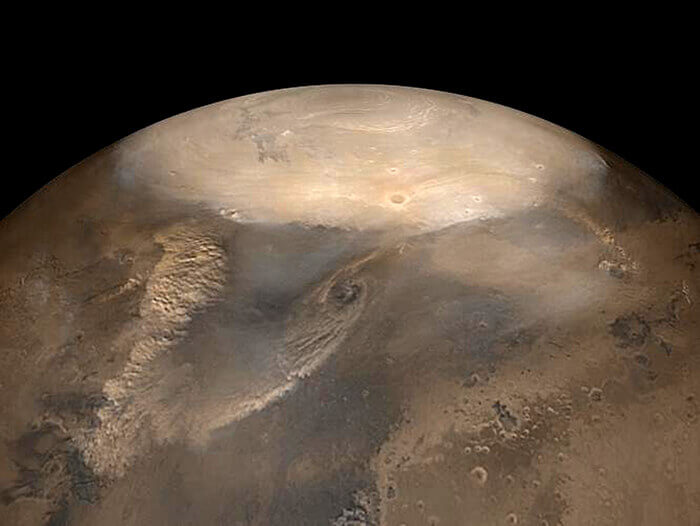 WEST LAFAYETTE, Ind. — Nearly every atmospheric science textbook ever written will say that hurricanes are an inherently wet phenomenon – they use warm, moist air for fuel. But according to new simulations, the storms can also form in very cold, dry climates.

A climate as cold and dry as the one in the study is unlikely to ever become the norm on Earth, especially as climate change is making the world warmer and wetter. But the findings could have implications for storms on other planets and for the intrinsic properties of hurricanes that most scientists and educators currently believe to be true.

“We have theories for how hurricanes work at temperatures that we’re used to experiencing on Earth, and theoretically, they should still apply if we move to a colder and drier climate,” said Dan Chavas, an assistant professor of earth, atmospheric and planetary sciences at Purdue University. “We wanted to know if hurricanes really need water. And we’ve shown that they don’t – but in a very different world.”

In the world we live in now, hurricanes need water. When they reach land, they die because they run out of the water they evaporate for energy – but that doesn’t have to be the case. The findings were published in the Journal of the Atmospheric Sciences.

“Just because there isn’t something changing phase between liquid and vapor doesn’t mean a hurricane can’t form,” Chavas said.

In collaboration with Timothy Cronin, an assistant professor of atmospheric science at MIT, he used a computer model that mimics a very basic atmosphere and constantly generates hurricanes. In a general hurricane scenario, this looks like a box with ocean at the bottom, but Chavas tweaked it to dry out the surface or cool it below temperatures that usually generate hurricanes.

The coldest simulations were run at 240 degrees Kelvin (-28 F) and produced a shocking number of cyclones. These cold, dry storms were generally smaller and weaker than the hurricanes on Earth, but they formed at a higher frequency.

Interestingly, there is a range of moderate temperatures and moisture levels in which no cyclones formed at all. From 250 to 270 degrees Kelvin (-10 F to 26 F), no hurricanes formed, although the researchers aren’t sure why. At 280 Kelvin (44 F), the atmosphere filled again with cyclones.

“Maybe that means there are ideal regimes for hurricanes to exist and the current world we live in is one,” Chavas said. “Or you could be in another world where there’s no water, but it’s still capable of producing many hurricanes. When people are considering whether we could live on a dry, rocky planet like Mars, this could be something to consider.”

Such a planet could have even more hurricanes than occur on Earth. Because it’s difficult to study the atmospheres of other planets, scientists have to work with their knowledge of Earth and fundamental understanding of how atmospheres function.

It is widely believed that tropical cyclones are an intrinsically moist phenomenon – requiring evaporation and latent heat release in cumulus convection. Recent numerical modeling by Mrowiec et al. (2011), however, challenged this conventional wisdom by finding formation of axisymmetric dry tropical cyclones in dry radiative-convective equilibrium (RCE). This paper addresses ensuing questions about the stability of dry tropical cyclones in 3D, the moist-dry vortex transition, and whether existing theories for intensity, size, and structure apply to dry cyclones. A convection-permitting model is used to simulate rotating 3D RCE, with surface wetness (0-1) and surface temperature (240K-300K) smoothly varying between dry and moist states. Tropical cyclones spontaneously form and persist for tens of days in both moist and dry/cold states, as well as part of the relatively moist/warm intermediate parameter space. As the surface is dried or cooled, cyclones weaken, both in absolute terms and relative to their potential intensities. Dry and semi-dry cyclones have smaller outer radii but similar-sized or larger convective centers compared to moist cyclones, consistent with existing structural theory. Strikingly, spontaneous cyclogenesis fails to occur at moderately low surface wetness values and intermediate surface temperatures of 250-270 K. Simulations with time-varying surface moisture and sea-surface temperatures indicate this range of parameter space is a barrier to spontaneous genesis but not cyclone existence. Dry and semi-dry tropical cyclones in rotating RCE provide a compelling model system to further our understanding of real moist tropical cyclones.