The Gateway Complex will include two buildings comprising 255,000 square feet of space, which will cost an estimated $140 million. In addition to the Lilly Endowment grant of $40 million, the project is being supported by $60 million from the state of Indiana, and the remaining $40 million will be raised in private donations. Once complete, the complex will help Purdue meet its goal of expanding opportunities for talented STEM students who apply to attend Purdue each year but are turned away because of lack of space. Information about the Gateway Complex project can be found here. 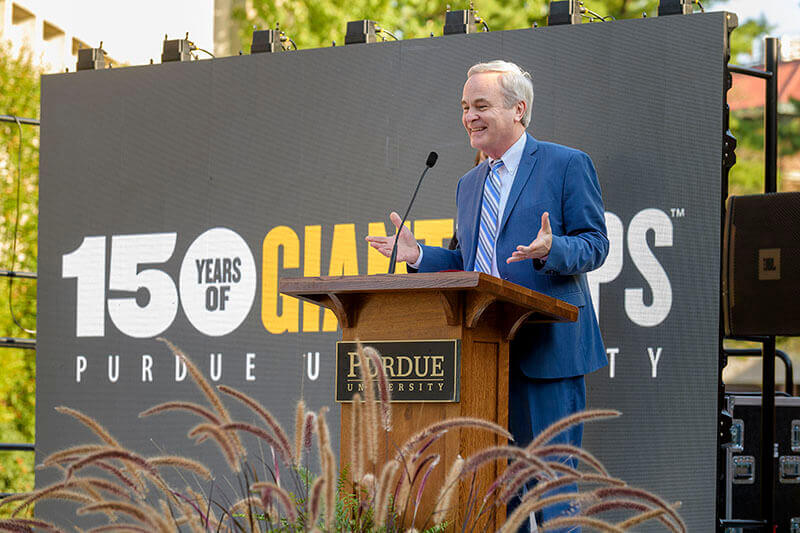 The complex is being designed as an interdisciplinary hub that will connect project-based instructional laboratories, design studios and other collaborative spaces. Embedded in the project will be the Hoosier Hot Corner, a physical “front door” to connect Indiana companies as they collaborate with faculty researchers, hire students as interns and identify future full-time employees. A YouTube video is available here.

“The need for world-class engineers, technologists and other STEM leaders has never been greater as the state of Indiana and the nation prepare for the jobs of tomorrow,” said N. Clay Robbins, Lilly Endowment’s chairman, president and CEO. “Purdue has achieved significant impact through earlier grants to launch Discovery Park and enhance the College of Engineering and the Polytechnic Institute. The intellectual and entrepreneurial energy on campus is magnetic. We are pleased to help build on this momentum by supporting Purdue’s efforts to prepare more graduates for promising careers in which they will help innovative companies thrive in Indiana and throughout the world.”

Throughout its history, Purdue has produced thousands of engineers and STEM graduates, and thanks to recent major investments, the College of Engineering has grown undergraduate enrollment by more than 26 percent since 2013, and the Polytechnic Institute undergraduate enrollment has grown by 31 percent in that same time period. Purdue currently enrolls nearly 22,000 students, or 65 percent of undergraduates, in the STEM disciplines and annually awards the third-most STEM degrees in the country. 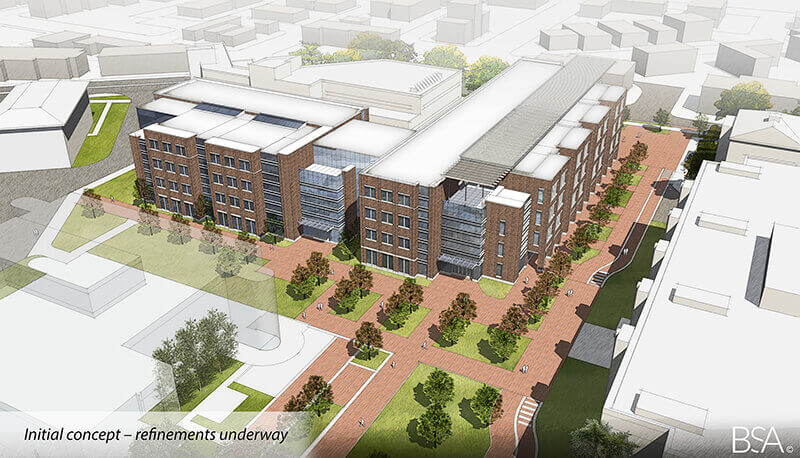 This is an initial conceptual rendering (refinements underway) of the Gateway Complex, which will include two buildings comprising 255,000 square feet of space. (Image provided) Download image

Purdue University President Mitch Daniels said the grant will ensure that Purdue will be able to meet its commitment to produce the graduates that the state and the world need, building on the successes of earlier Lilly Endowment-funded projects: With grants in 2001 and 2005, Purdue developed Discovery Park, a strategic network of research and academic centers working to strengthen multi-disciplinary collaboration and innovation among students, professors and research scholars. Another $40 million Lilly Endowment grant announced in 2015 funded construction and renovation of research facilities and laboratories, classrooms and workspaces that are further building collaboration among the university’s College of Engineering and its technology programs that comprise the Purdue Polytechnic Institute.

“This latest Lilly Endowment grant will enable Purdue to graduate more STEM professionals and help them build careers with Indiana businesses,” said President Mitch Daniels. “Support from Lilly Endowment has played a vital role in our success for years - and now promises greater impact as we educate the students who will frame the future of our community, state, nation and world.”

To be built on the site of the current Nuclear Engineering Building and Michael Golden Labs, the Gateway Complex will more than double the space at that location and become the academic home for schools from both the College of Engineering and the Purdue Polytechnic Institute. One building in the Gateway Complex will be named Dudley Hall in recognition of ongoing support from Bill and Marty Dudley.

To encourage additional private support for the Gateway Complex, $10 million of Lilly Endowment’s grant is subject to matching conditions.

Construction on the Gateway Complex is expected to begin in spring 2020 and be completed in fall 2022.

Note to Journalists: Video b-roll from the announcement will be available Tuesday (Sept. 10) afternoon at https://drive.google.com/open?id=1MAnOiXnuu9t0_ZZAS9No7ogmX8fxQn8E. A photo from the event also will be available later Tuesday.