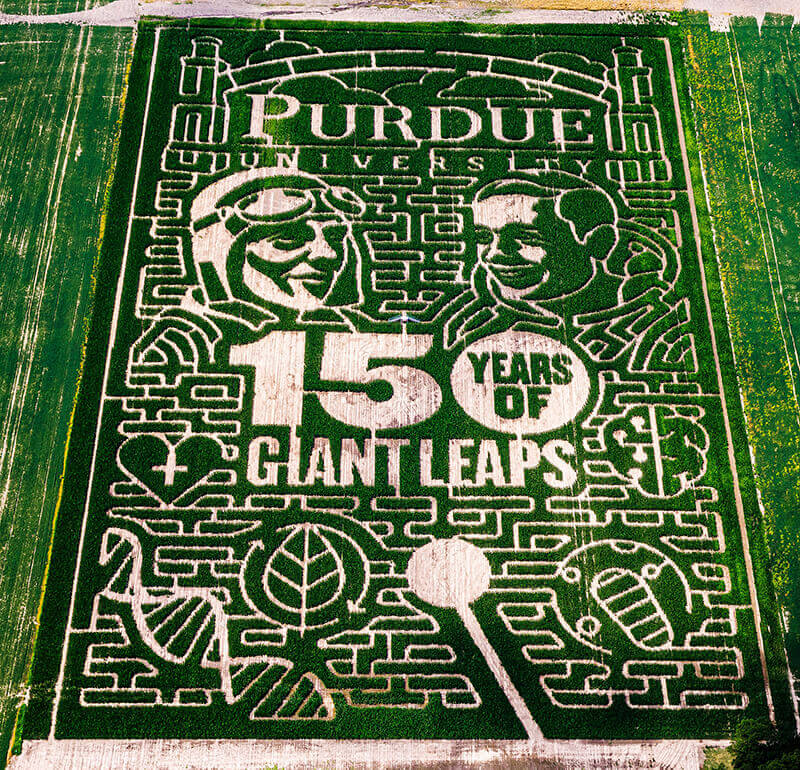 Exploration Acres, which finished third among 530 mazes in the competition last year, has a design commemorating Purdue University’s “150 Years of Giant Leaps.” The design includes images of alumnus Neil Armstrong, the first man to walk on the moon; and Amelia Earhart, the first woman to attempt to circumnavigate the globe and an advisor for young women at Purdue in the 1930s. The deadline for online voting to pick the winner is Monday (Aug. 26). A person can vote once a day for the duration of the contest. Winners will be announced Sept. 6, then later in USA Today.

The 18-acre corn maze this year features 494,000 stalks of corn. Check out these fun 10 facts about what makes this maze so great:

Exploration Acres’ mazes are designed to be more intricate and challenging than most of its competitors, so here is a tip from Tim Fitzgerald, president and CEO of Exploration Acres:

“The maze is divided into four individual mazes. Tackle one maze at a time and use the checkpoints as points of reference to keep you from getting lost. Rotate your map in the direction of the path you are on and count connecting paths as you pass them on the way to each checkpoint. Large design elements like numbers and letters are usually wider than typical maze paths and are good points of reference too.”

Or you can always call the hotline on the maze map and an Exploration Acres employee will rescue you.