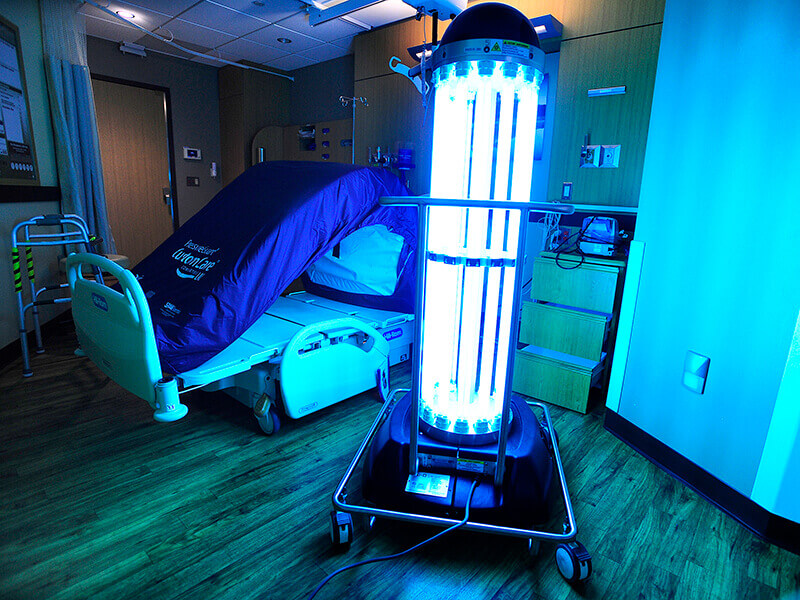 Some hospitals use ultraviolet light devices to kill difficult germs to disinfect rooms in hospitals. But these devices cast shadows, which can allow germs to grow. The World Health Organization warns that antibiotic resistance is one of the biggest global threats. Purdue University researchers are developing a method of combating that antibiotic resistance through self-disinfecting surfaces that would kill bacteria, even those known as superbugs. The researchers are developing an ultra-thin coating, smaller than a micrometer, made of ultraviolet light emitting diodes, that could be integrated into materials. (Associated Press photo/Ryan Brennecke/The Bulletin) Download image

WEST LAFAYETTE, Ind. – The World Health Organization warns that antibiotic resistance is one of the biggest global threats and predicts that worldwide death rates from this threat could skyrocket past 10 million a year by 2050, becoming more deadly than cancer, which kills 8.2 million people worldwide each year.

Purdue University researchers are developing a method of combating that antibiotic resistance through self-disinfecting surfaces that would kill bacteria, even those known as superbugs. The researchers are developing an ultra-thin coating, smaller than a micrometer, made of ultraviolet light emitting diodes (UV-LED) that could be integrated into materials, such as vinyl flooring, wall coverings, door handles and even toilet seats.

“This ultra-thin coating kills any germs, bacteria, viruses, fungi and parasites. They cannot become resistant because any DNA that could make them resistant gets destroyed during the disinfection,” said Tillmann Kubis, a research assistant professor in Purdue’s School of Electrical and Computer Engineering, who is leading the research of Jinying Wang, KuangChung Wang, Yuanchen Chu and James Charles.

The U.S. Centers for Disease Control and Prevention describes antibiotic resistance as “one of the biggest public health challenges of our time.” The resistance comes from the persistent overuse and misuse of antibiotics in both humans and animals. Antibiotic resistance   occurs when microbes, such as bacteria, become resistant to the drugs used to treat them, turning hospitals into reservoirs of harmful bacteria.

Some hospital use UV lights to try to disinfect rooms, but those can cast shadows,  where bacteria can hide and survive. Hospitals also use chemicals to disinfect, but some bacteria are resistant and that method is slow, is expensive, requires specialized training and can be dangerous. New antibiotics take decades to develop.

The method Purdue researchers are developing is shadowless, is pliable and takes less than five minutes to disinfect. The technology works by applying an electric field, causing the 2D material to light up and kill the harmful bacteria. The entire room could be covered by the material. It also requires less power than UV lamps and is less bulky because no additional equipment is needed.

No training is necessary. Operators would simply need to keep their distance to avoid getting sunburned.

“The ultra-thin coating promises to be the healthiest way to disinfect and its LED technology is long-lasting and energy efficient,” Kubis said.

The UV-LED technology could save billions of dollars for hospitals, where the cost of running an operating room averages $60 a minute and there are 80 million surgeries a year in the United States, Kubis said.

A patent for the technology is filed through the Purdue Research Foundation Office of Technology Commercialization. They are looking for funding to build a prototype and are interested in collaboration, partnership and licensing.

Their work aligns with Purdue's Giant Leaps celebration, celebrating the global advancements in artificial intelligence of life as part of Purdue’s 150th anniversary. Artificial intelligence, including structural health assessment, is one of the four themes of the yearlong celebration’s Ideas Festival, designed to showcase Purdue as an intellectual center solving real-world issues.

The Purdue Office of Technology Commercialization operates one of the most comprehensive technology transfer programs among leading research universities in the U.S. Services provided by this office support the economic development initiatives of Purdue University and benefit the university's academic activities. The office is managed by the Purdue Research Foundation, which received the 2016 Innovation and Economic Prosperity Universities Award for Innovation from the Association of Public and Land-grant Universities. For more information about funding and investment opportunities in startups based on a Purdue innovation, contact the Purdue Foundry at foundry@prf.org. For more information on licensing a Purdue innovation, contact the Office of Technology Commercialization at otcip@prf.org and reference 2017-KUBI-67831. The Purdue Research Foundation is a private, nonprofit foundation created to advance the mission of Purdue University.