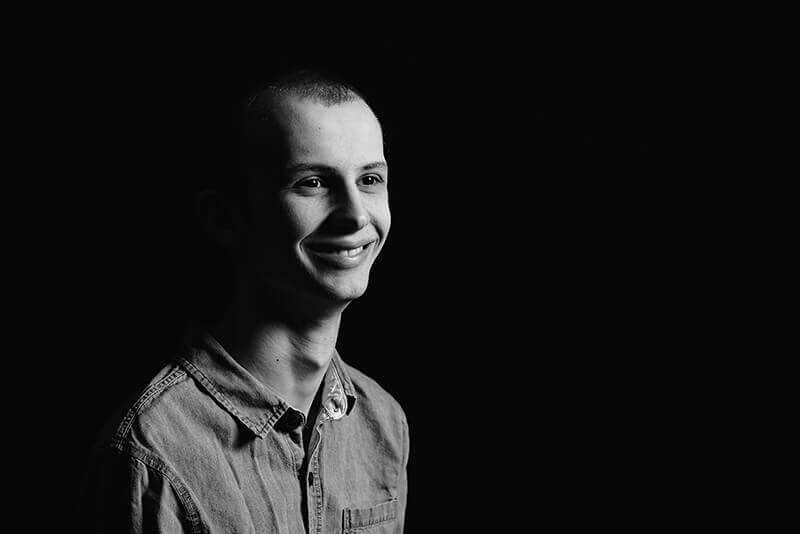 The Purdue Center for Cancer Research is honoring the legacy of Tyler Trent – the Purdue graduate and superfan who died of the rare bone cancer osteosarcoma – through three new collaborative research initiatives. Download image

WEST LAFAYETTE, Ind. – The Purdue Center for Cancer Research is honoring the legacy of Tyler Trent – the Purdue graduate and superfan who died Jan. 1 at age 20 of the rare bone cancer osteosarcoma – through three new collaborative research initiatives, including one that involves using his cancer cells.

Trent, an inspiration to many for his grace as he battled cancer and cheered for his Boilermakers, was the first student member of the center’s Director’s Advancement Board, and he donated his osteosarcoma tumors before his death to be used for research to help others.

“Part of Tyler’s incredible lasting legacy is that he will help current and future patients,” said Tim Ratliff, a distinguished professor of comparative pathobiology in Purdue’s College of Veterinary Medicine and the Robert Wallace Miller Director of the Purdue University Center for Cancer Research. “Our focus is on moving treatments forward so they reach those in need.”

Trent’s donated cells will be tested using biodynamic imaging. David Nolte, the Edward M. Purcell Distinguished Professor of Physics and Astronomy in Purdue’s College of Science, and John Turek, a professor of basic medical sciences in Purdue’s College of Veterinary Medicine, will study Trent’s cells to measure motion. They are working in coordination with Drs. Jamie Renbarger and Karen Pollok from Riley Hospital for Children to identify osteosarcoma chemotherapy sensitivity.

The second new research initiative also involves biodynamic imaging. Nolte, Turek and Michael Childress, an associate professor of comparative oncology in Purdue’s College of Veterinary Medicine, are working on using biodynamic imaging to identify chemosensitivity in canine osteosarcoma. It is quite similar to its human counterpart, so canine osteosarcoma can be tested with the same chemotherapeutic agents to help find better treatments.

The third new collaborative research initiative involves Philip Low, the Ralph C. Corley Distinguished Professor of Chemistry in Purdue’s College of Science. Low has worked with his team to develop a technology that allows T cells to be collected from a patient, then genetically modified into CAR T cells and injected back into the patient so that their own CAR T cells can target and destroy the cancer cells. The technology is set to go to trial this summer with Dr. Mike Jensen of the Seattle Children’s Research Institute for the treatment of osteosarcoma, which is typically a pediatric bone cancer and what Trent battled for several years.

According to the American Cancer Society, osteosarcoma is the most common type of bone cancer in children and teens. About 800 to 900 new cases of osteosarcoma are diagnosed in the U.S. annually, about half of them in the 5 to 20 age group. It is reported by the ACS that in about 15 to 20 percent of patients, osteosarcoma has spread by the time it is diagnosed because symptoms are so similar to other health conditions. The cancer typically spreads to the lungs but sometimes to other bones beyond the initial site.

The Purdue Center for Cancer Research and its scientists and researchers work with the Purdue Research Foundation Office of Technology Commercialization to patent some of their technologies, including biodynamic imaging and CAR T cells.

The new research initiatives align with Purdue's Giant Leaps celebration, celebrating the global advancements in health as part of Purdue’s 150th anniversary. It is one of the four themes of the yearlong celebration’s Ideas Festival, designed to showcase Purdue as an intellectual center solving real-world issues.

The Purdue Research Foundation Office of Technology Commercialization operates one of the most comprehensive technology transfer programs among leading research universities in the U.S. Services provided by this office support the economic development initiatives of Purdue University and benefit the university's academic activities. The office is managed by the Purdue Research Foundation, which received the 2016 Innovation and Economic Prosperity Universities Award for Innovation from the Association of Public and Land-grant Universities. For more information about funding and investment opportunities in startups based on a Purdue innovation, contact the Purdue Foundry at foundry@prf.org. For more information on licensing a Purdue innovation, contact the Office of Technology Commercialization at otcip@prf.org. The Purdue Research Foundation is a private, nonprofit foundation created to advance the mission of Purdue University.