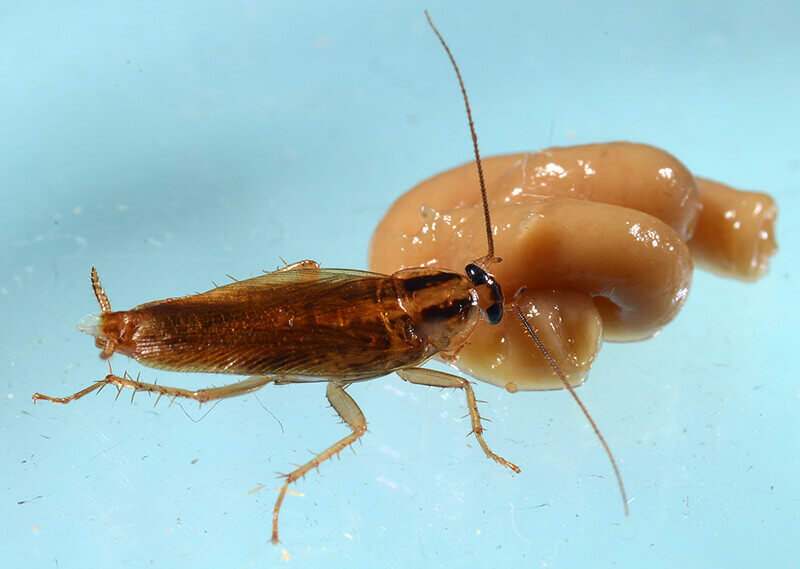 A German cockroach feeds on an insecticide in the laboratory portion of a Purdue University study that determined the insects are gaining cross-resistance to multiple insecticides at one time. (Photo by John Obermeyer/Purdue Entomology) Download image

WEST LAFAYETTE, Ind. – Cockroaches are serious threats to human health. They carry dozens of types of bacteria, such as E. coli and salmonella, that can sicken people. And the saliva, feces and body parts they leave behind may not only trigger allergies and asthma but could cause the condition in some children.

A Purdue University study led by Michael Scharf, professor and O.W. Rollins/Orkin Chair in the Department of Entomology, now finds evidence that German cockroaches (Blattella germanica L.) are becoming more difficult to eliminate as they develop cross-resistance to exterminators’ best insecticides. The problem is especially prevalent in urban areas and in low-income or federally subsidized housing where resources to effectively combat the pests aren’t as available.

“This is a previously unrealized challenge in cockroaches,” said Scharf, whose findings were published in the journal Scientific Reports. “Cockroaches developing resistance to multiple classes of insecticides at once will make controlling these pests almost impossible with chemicals alone.”

Each class of insecticide works in a different way to kill cockroaches. Exterminators will often use insecticides that are a mixture of multiple classes or change classes from treatment to treatment. The hope is that even if a small percentage of cockroaches is resistant to one class, insecticides from other classes will eliminate them.

Scharf and his study co-authors set out to test those methods at multi-unit buildings in Indiana and Illinois over six months. In one treatment, three insecticides from different classes were rotated into use each month for three months and then repeated. In the second, they used a mixture of two insecticides from different classes for six months. In the third, they chose an insecticide to which cockroaches had low-level starting resistance and used it the entire time.

In each location, cockroaches were captured before the study and lab-tested to determine the most effective insecticides for each treatment, setting up the scientists for the best possible outcomes.

“If you have the ability to test the roaches first and pick an insecticide that has low resistance, that ups the odds,” Scharf said. “But even then, we had trouble controlling populations.”

In later lab tests of the remaining cockroaches, Scharf and the team found that cross-resistance likely played a significant role. A certain percentage of cockroaches would be resistant to a particular class of pesticide. Those that survived a treatment and their offspring would be essentially immune to that insecticide going forward. But they also gained resistance to other classes of insecticide, even if they hadn’t been exposed to them and had not had previous resistance.

“We would see resistance increase four- or six-fold in just one generation,” Scharf said. “We didn’t have a clue that something like that could happen this fast.”

Female cockroaches have a three-month reproductive cycle during which they can have up to 50 offspring. If even a small percentage of cockroaches is resistant to an insecticide, and those cockroaches gain cross-resistance, a population knocked down by a single treatment could explode again within months.

That’s why an integrated pest management approach is critical, Scharf said. He recommends combining chemical treatments with traps, improved sanitation and vacuums that can remove cockroaches.

“Some of these methods are more expensive than using only insecticides, but if those insecticides aren’t going to control or eliminate a population, you’re just throwing money away,” Scharf said. “Combining several methods will be the most effective way to eliminate cockroaches.”

The U.S. Department of Housing and Urban Development the O.W. Rollins/Orkin endowment in the Purdue Department of Entomology supported this research.

The German cockroach (Blattella germanica L.) is a worldwide pest that lives exclusively in human environments. B. germanica threatens human health by producing asthma-triggering allergens, vectoring pathogenic/antibiotic-resistant microbes, and by contributing to unhealthy indoor environments. While insecticides are essential for reducing cockroach populations and improving health outcomes, insecticide resistance has been a consistent barrier to cockroach control since the 1950s. We conducted seminal field studies to compare three insecticide resistance intervention strategies for cockroaches and evaluated resistance evolution across multiple generations. Using pre-treatment resistance assessment to drive decisions, we found that single active ingredient (AI) treatments can successfully eliminate cockroaches if low starting resistance levels are present. We further established that rotation treatments intuitively reduce selection pressure, and are effective when insecticides with no/low resistance are used. We also found that mixture products containing thiamethoxam+λ-cyhalothrin AIs were universally ineffective and highly repellent; and finally, evolution of cross-resistance among AIs is a significant, previously unrealized challenge.