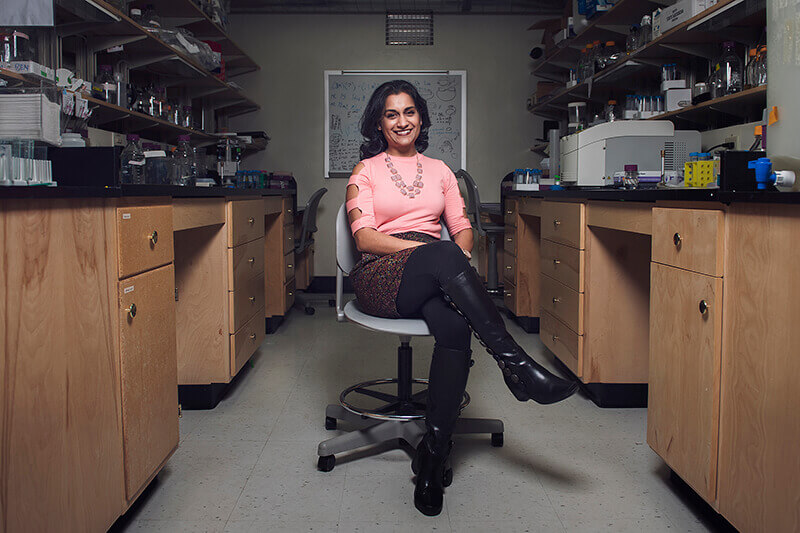 WEST LAFAYETTE, Ind. — The true cause of Parkinson’s disease is still a mystery to researchers, although they do know that in many patients, a protein called alpha-synuclein (aSyn) tends to aggregate in brain cells. But a different protein could help stop that aggregation, according to a new study in the Journal of Molecular Biology.

HYPE, the only Fic protein found in humans, is a key regulator of whether cells live or die under stress. In order to work properly, proteins need to fold in the correct shape. When cells are stressed, their proteins can become misfolded, at which point they can aggregate and become toxic. Cells sense stress by assessing the amount of misfolded proteins within them.

“Since HYPE plays such an important role in how cells deal with stress from misfolded proteins, we wondered whether diseases that result from protein misfolding were likely to need HYPE,” said Seema Mattoo, an assistant professor of biological sciences at Purdue University. “We know that in Parkinson’s disease, often the misfolded protein is aSyn. So we asked if HYPE could modify aSyn, and if so, what are the consequences?”

The study shows that HYPE does modify aSyn – and that this new modification, called AMPylation, decreases aggregation.

Clumps of aSyn, known as Lewy bodies, are the pathological hallmark of Parkinson’s disease. Aggregated aSyn can poke holes in the membranes of neurons, which causes a decline in nerve function and messes up how nerve cells communicate.

To figure out if lower aggregation of aSyn actually translates to fewer poked holes, Mattoo worked with Jean-Christophe Rochet, a professor of medicinal chemistry and molecular pharmacology at Purdue, to mimic a membrane using different lipids and then compare how the modified and unmodified aSyn fared against it. The lipids were loaded with dye, which would leak out if holes were poked.

“We found that less dye was released with the modified aSyn, meaning the membrane stayed more intact,” said Mattoo, who is also a member of Purdue’s Institute of Inflammation, Immunology and Infectious Disease and Center for Cancer Research. “That means HYPE could possibly have a therapeutic effect on Parkinson’s disease.”

Prior to this study, AMPylation of aSyn, which reduces aggregation, had never been seen before. Many modifications of the protein occur naturally, but they tend to increase aggregation.

When Mattoo’s team looked at modified aSyn under an electron microscope, they also found that the structure of the protein had changed. Normal aSyn tends to twist, which could promote aggregation. But the new, modified version doesn’t twist as much – it forms parallel fibers, which might be why it aggregates less, Mattoo said.

About 60,000 Americans are diagnosed with Parkinson’s disease each year, affecting roughly 1% of the population over the age of 60. It manifests in shakiness, stiffness, and difficulty with walking, balance and coordination, as well as mental and behavioral changes. There is no cure for the disease, but medication can help reduce symptoms.

Parkinson’s disease is difficult to treat because its true cause is poorly understood, and no one understands the real function of aSyn. Researchers know its aggregation promotes the disease, but why does the cell allow it to aggregate in the first place? Why is aSyn there to begin with? While aSyn’s exact biological function remains unknown, researchers are hesitant to attack the protein because it is important for the survival of nerve cells.

“We’re all trying to apply a Band-Aid at the end of disease progression because we know aggregation causes the cells to become toxic, but how can we prevent that?” Mattoo said. “There is still much to be understood mechanistically about it in the context of disease.”

The study was done in vitro, but the next step is to move it into brain cells, and then into an animal model.

“We’re in the early stages, but these results are giving us a new angle to look at potential therapeutics,” Mattoo said. “We’re trying to come up with drugs that could be used to manipulate HYPE’s activity. You could give them to patients who are starting to show signs of Parkinson’s or who are prone to having aggregated aSyn. That’s the direction we want to go.”

Mattoo and Rochet are both members of Purdue’s Institute for Integrative Neuroscience (PIIN), of which Rochet has served as director since January 2019. PIIN, a part of Discovery Park, was founded in 2016 to leverage Purdue’s strengths in science and engineering in several key research areas relevant to neuroscience, including neurodevelopment, neurodegeneration and neurotrauma, sensory systems and neuroengineering.

Alpha-Synuclein is a Target of Fic-mediated Adenylylation/AMPylation: Possible Implications for Parkinson's Disease

mediated Adenylylation/AMPylation. Specifically, we showed that the human Fic (filamentation induced by cAMP) protein, HYPE/FicD, catalyzes the addition of an AMP (adenosine monophosphate) to the ER chaperone, BiP, to alter the cell’s UPR-mediated response to misfolded proteins. Here, we report that we have now identified a second target for HYPE - alpha-Synuclein (αSyn), a presynaptic protein involved in Parkinson’s disease (PD). Aggregated αSyn has been shown to induce ER stress and elicit neurotoxicity in PD models. We show that HYPE adenylylates αSyn and reduces phenotypes associated with αSyn aggregation in vitro, suggesting a possible mechanism by which cells cope with αSyn toxicity.