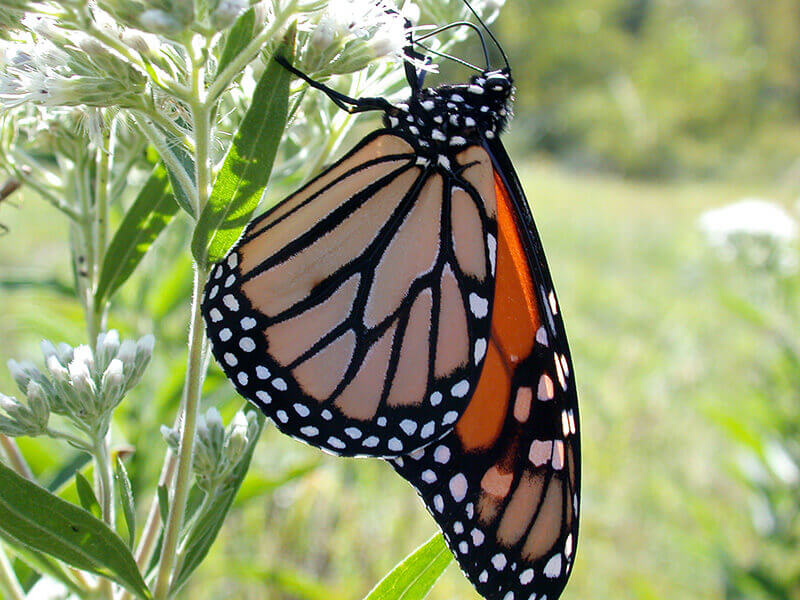 Purdue University researchers have found evidence near agricultural fields of pesticides on milkweed, a vital source of food for monarch butterfly caterpillars. It raises questions about pesticide roles in the decline of the species. (Photos by John Obermeyer/Purdue Entomology) Download image

WEST LAFAYETTE, Ind. – Conservation organizations across the United States plant milkweed to combat the loss of monarch butterflies, whose populations have declined around 90 percent in the last two decades. Where they plant may be important, according to a Purdue University study that finds evidence of agricultural pesticides on milkweed near farm fields.

Milkweed is the primary diet for monarch caterpillars, and loss of the plant has been tied to declines in butterfly populations. But as milkweed stems have increased in recent years, monarch numbers have continued to decline.

Purdue’s Ian Kaplan, a professor of entomology, and his doctoral student, Paola Olaya-Arenas, wondered if pesticides might be a factor in particular neonicotinoids, which are used to coat crop seeds to protect them from insects and have been linked to honeybee losses. They found neonicotinoids in milkweed near farm fields, but they caution that their presence does not necessarily make them responsible for monarch losses.

“Finding pesticides on milkweed is a concern, but we can’t say anything about the impact based on this. We aren’t sure if they’re highly toxic, if they have some sub-lethal impact or if there is no effect at all,” said Kaplan, whose findings were published in the journal Frontiers in Ecology and Evolution. “We just don’t know why these monarch declines are happening, and this is one idea that hasn’t been tested.”

As part of her dissertation, Olaya-Arenas collected more than 1,500 milkweed leaves across seven sites in Indiana over two years. The leaves tested positive for 14 pesticides – four insecticides, four herbicides and six fungicides – of varying concentrations. The neonicotinoids clothianidin and thiamethoxam were present, as was the pyrethroid insecticide deltamethrin. The neonicotinoid imidacloprid was detected in small concentrations in just a few plants.

Insecticide presence and concentrations varied by year and month. Clothianidin, for example, was found in June but not later months. Thiamethoxam and deltamethrin were mainly found in the second year of the study, but not the first.

“The data suggest that early-season monarchs are at greater risk from neonicotinoid exposure than subsequent generations occurring later in the season. Similarly, our data suggest strong annual fluctuations in risk, indicating that monarchs likely encounter a different suite of pesticides each year,” the authors wrote.

Distance also played a role, with insecticide detection and concentrations decreasing further from farm fields. Kaplan and Olaya-Arenas think that’s important because some organizations advise planting milkweed at least 125 feet from a farm field. Pesticides could be found beyond that distance, however, and up to 2 km for some chemicals.

“People want to know the best places to plant all this milkweed in the Midwest to restore monarch populations, and there’s this 125-foot idea that doesn’t seem to have any scientific backing,” Kaplan said. “It’s not a bad idea to put some distance between milkweed and farm fields, but we didn’t see a magic drop off at 125 feet.”

Kaplan and Olaya-Arenas are now taking the next step in determining whether neonicotinoids and other pesticides are harming monarch populations, conducting toxicity experiments with those chemicals found on milkweed near farm fields.

Funding for this study came from the government of Colombia (Colciencias) and grants from the Nature Conservancy, Xerces Society, Experiment.com and Purdue AgSeed.

Monarch butterflies are undergoing a long-term population decline, which has led to a search for potential causes underlying this pattern. One poorly studied factor is exposure to non-target pesticides on their primary host-plant, the common milkweed A. syriaca, during larval development. This species frequently grows near agricultural fields in the Midwestern U.S., but the spectrum of pesticides encountered by monarch caterpillars on milkweed leaves is unknown. Further, it is unclear whether pesticide exposure can be avoided by isolating restored milkweed patches at sites far from cropland. Over two years, we analyzed 1,543 milkweed leaves across seven sites in northwestern Indiana for the presence and concentration of a range of commonly used agricultural insecticides, fungicides, and herbicides. Additionally, we tested the ability of local (i.e., nearest linear distance to crop field) and landscape-level (i.e., % of corn/soybean in 1 km radius) variables to predict the presence of pesticides on focal milkweeds. Overall, we detected 14 pesticides—4 insecticides, 4 herbicides, 6 fungicides—on milkweeds that varied widely in their prevalence and concentration. The neonicotinoid clothianidin, the only pesticide for which toxicity data are available in monarchs, was detected in 15-25% of plants in June with nearly 60% of milkweeds at some sites testing positive (mean conc. = 0.71 and 0.48 ng/g in 2015 and 2016, respectively); however, no samples from July or August contained clothianidin. The related neonicotinoid thiamethoxam and the pyrethroid deltamethrin were detected in most (>75%) samples throughout the season, but only in the second year of the study. For thiamethoxam, isolating milkweeds 50-100 m from the nearest corn or soybean field tended to decrease the concentration and likelihood of detecting residues, whereas landscape composition surrounding milkweed sites had comparatively weak predictive power. These data suggest that monarch caterpillars frequently consume a diversity of pesticides in their diet; the lethal or sublethal impacts of this exposure remain to be tested.