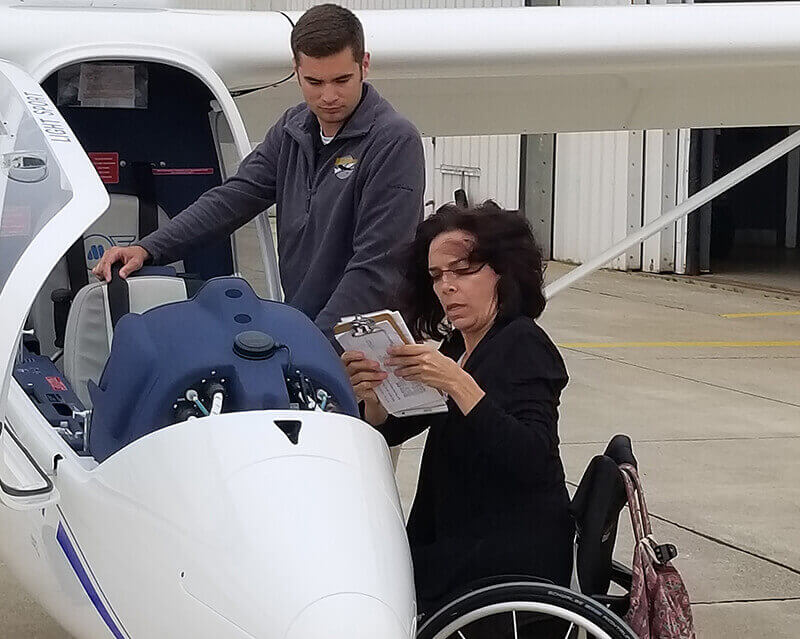 2018 Able Flight student Emily Hupe of California goes through her pre-flight checklist last year at Purdue University Airport. Hupe, who did not finish last year’s training, is one of eight persons with disabilities taking part in this year’s Able Flight program through the end of June. (Purdue University photo/Brian Huchel) Download image

WEST LAFAYETTE, Ind. — The Able Flight program students who come to Purdue University don’t let their disabilities stop them from pursuing life, and this year’s class is a perfect example.

Among attendees flying at Purdue University Airport this year are a model who won Miss Wheelchair Georgia in 2015, and a paralyzed former U.S. Army Blackhawk helicopter pilot who will return to flying with his Able Flight scholarship.

This month marks the 10th consecutive year of Purdue University’s partnership with Able Flight, which teaches people dealing with disabilities the opportunity to learn to fly.

Students in this year’s Able Flight program arrived on campus during the weekend. Classroom work on the ground began Sunday and they are expected to begin flying by Tuesday at the Purdue University Airport.

Through the end of June, the students will learn the nuances of piloting a plane in order to earn a light sport pilot license. The training is intensive, with students flying at least twice each day as well as completing initial work in the classroom.

Bernie Wulle, associate professor of aviation, has coordinated Purdue’s involvement in the Able Flight program. He said the program brings in all types of people each year, but they are all goal-oriented.

“They don’t let their disability slow them down,” he said. “They’re here for a purpose and are really motivated to learn and succeed.”

In addition, Emily Hupe of California is returning to finish what she started after sickness pulled her out of the program last year.

The students already have begun their studies with online courses. Most of the students use Sky Arrow LSA planes that can be adapted for hand controls with the instructor sitting behind the student.

By completing the program, the Able Flight students will be guests of honor in July when they receive their Able Flight Wings on stage at EAA AirVenture, just weeks after becoming licensed light sport plane pilots.

Able Flight is a national nonprofit organization created by pilots to share the experience of learning to fly and enable people with disabilities to pursue that experience.

Note to Journalists: Able Flight participants are expected to be available for interviews after June 3.